Responsibilities for childcare, health, and protecting vulnerable children are split across various corners of bureaucracy, but federal Labor wants to overhaul this to make sure Australia can realise the full economic benefits of nurturing the early years.

The opposition has expanded on its plan to offer higher childcare subsidies to more families to promise it will implement a cross-government early years strategy if it wins next year’s election, the Herald and The Age can reveal. 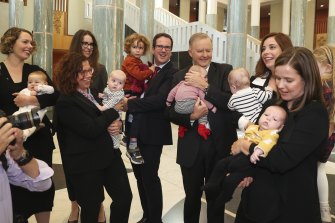 The policy will be announced by early childhood spokeswoman Amanda Rishworth on Monday as Labor seeks to make childcare and early learning a major battleground in the looming election. It’s one of only a handful of policies the opposition has formalised so far.

The government countered in May with $1.7 billion over five years to lift the subsidy for second and subsequent children where a family has more than one child aged under five in care at the same time. It will also scrap the annual cap on subsidies for high-income families, as will Labor.

Last month, the government brought the timeline for its changes forward to start in March 2022. It anticipates about 250,000 families from the more than 930,000 who use childcare will be better off.

The government has also switched the preschool funding from rolling single-year agreements to an ongoing basis, committing $1.6 billion over the next four years.

Ms Rishworth will highlight the economic benefits of investment in early childhood education in care in a speech to progressive think tank the McKell Institute on Monday.

She points out the estimated economic returns on road and rail projects are rarely questioned.

“But the arguments made for investment in infrastructure because of their productivity and economic growth could equally be applied to investments in childcare,” she will say.

“Because the economic cost-benefit return of investing in early learning and care is incredibly strong. It stacks up against and exceeds any other infrastructure project.”

Modelling of changes to the childcare system from accounting firms KPMG and PricewaterhouseCoopers, public policy organisation the Grattan Institute and early childhood advocates The Front Project over the past two years have put the return on investment ratio between 2.0 and 2.25 for every dollar spent. A report commissioned by state governments in 2018 found returns globally ranged between $2.62 to $17.07.

The economic data is complemented by evidence of the significant benefits to children from a better system and improved female workforce participation.

But Ms Rishworth says these will only be realised if governments actively chase the benefits.

“That isn’t going to happen under the current government attitude to early education and care,” she will say.

“They see their role as paying for the childcare subsidy, and that’s it.”

Labor’s proposed whole-of-government strategy would seek to break down the silos between departments – including education, social services, health and the National Indigenous Australians Agency – and make sure responsibility for any aspect of early childhood policy is coordinated.

“We need all the departments pulling in the same direction and working for the same goals,” Ms Rishworth will say.

“The Commonwealth government can do much more to advance the interests of Australia’s children and their families.

“But it can only do it if it has the interest and the vision.”