Lego bricks could survive in ocean for 1,300 years, study finds

Lego bricks can survive in the ocean for up to 1,300 YEARS before they break down – posing a serious threat to marine animals and the environment

A single plastic lego brick could survive in the ocean for a staggering 1,300 years before wasting away – posing a threat to marine animals and the environment.

Researchers from the University of Plymouth studied bricks that washed up on the coastlines of the south-west of England to discover their potentially long life.

They confirmed the ages of individual pieces and weighed them, then compared the result with that of equivalent unused pieces.

The study, published in the journal Environmental Pollution, estimated that the bricks could endure for between 100 and 1,300 years. 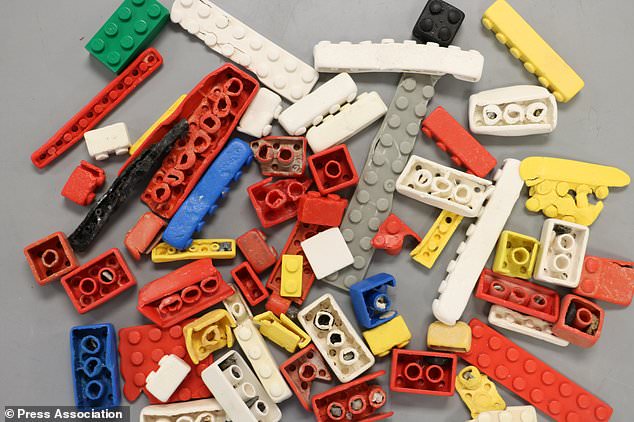 Dr Andrew Turner, associate professor in environmental sciences, said Lego is one of the most popular children’s toys in history and its durability is part of the appeal.

‘However, the full extent of its durability was even a surprise to us,’ he said.

‘It is designed to be played with and handled, so it may not be surprising that despite potentially being in the sea for decades, it isn’t significantly worn down.

‘The pieces we tested had smoothed and discoloured, with some of the structures having fractured and fragmented, suggesting that as well as pieces remaining intact, they might also break down into microplastics.’

The Plymouth team went a long way to try and find unweathered Lego bricks matching those that washed up.

They tried to match the colour, structure and size of the unweathered blocks to the weathered ones and to match serial numbers where they could find the details.

They said it is vital any waste is properly disposed of to reduce the impact of plastics and microplastics on the environment and marine wildlife.

‘It emphasises the importance of people disposing of used items properly to ensure they do not pose potential problems for the environment,’ said Turner.

Over the past decade, voluntary organisations from Cornwall – including Rame Peninsula Beach Care and the Lego Lost at Sea Project – have retrieved thousands of pieces of Lego and other plastic during regular beach cleans.

The study used 50 pieces of weathered Lego, constructed of acrylonitrile butadiene styrene (ABS), that were washed and then weighed in laboratories.

An X-ray fluorescence (XRF) spectrometer was used to determine the chemical characteristics of each block, with results used to confirm the age of the pieces based on the presence of certain elements no longer in use.

Researchers then paired the bricks with unweathered sets purchased in the 1970s and 80s to see how they compared.

They were able to identify levels of wear in the bricks retrieved from beaches, which was used to calculate how long the pieces might continue to endure in the marine environment. 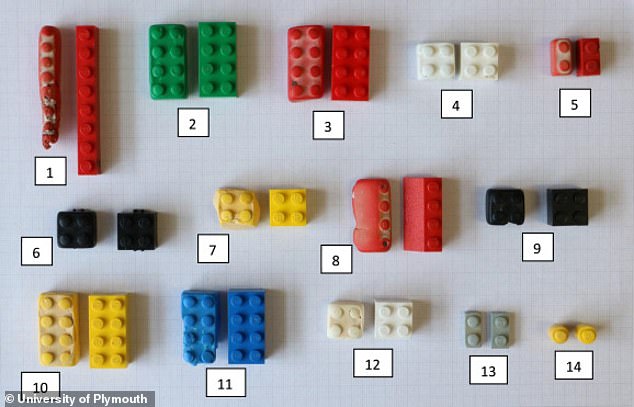 Exactly where the bricks came from is unclear, although a lot in the south-west of England are from a serious spillage in the 1990s.

In 1997 a well-documented spillage of Lego pieces occurred off the coast of south west England but no earlier spillages have been reported, the researchers say.

‘It is possible that individual blocks are lost at play on the beach or washed out to sea with watercourses when lost elsewhere,’ the team said.

‘However, research and calculations undertaken by one of the UK’s largest insurance companies suggests that over two million blocks have been flushed down the toilet by children under ten years old.’

By comparing equally aged blocks that have been in the ocean and those that were well preserved, they found the bricks could survive in a marine environment for hundreds of years – up to 1,300 years in total.

The research has been published in the journal Environmental Pollution.