The 2021 AMAs became a daddy-daughter date night for Machine Gun Kelly. The ‘Papercuts’ singer was accompanied by his pre-teen daughter to the show, and they looked like they were having a blast!

For those hoping that Machine Gun Kelly and Megan Fox would steam up the red carpet at the 2021 American Music Awards, they’ll have to wait until next year. At the Nov. 21 event, MGK (Colson Baker, 31) brought along his daughter as his plus one. Casie Colson Baker, 12, walked with her dad ahead of the show, and she looked just as punk rock as he did. Cassie wore her hair in glamorous curls while rocking an elegant black dress with cutouts at the sides. She accessorized the look with a gold chain around her neck and a pair of fierce earrings. 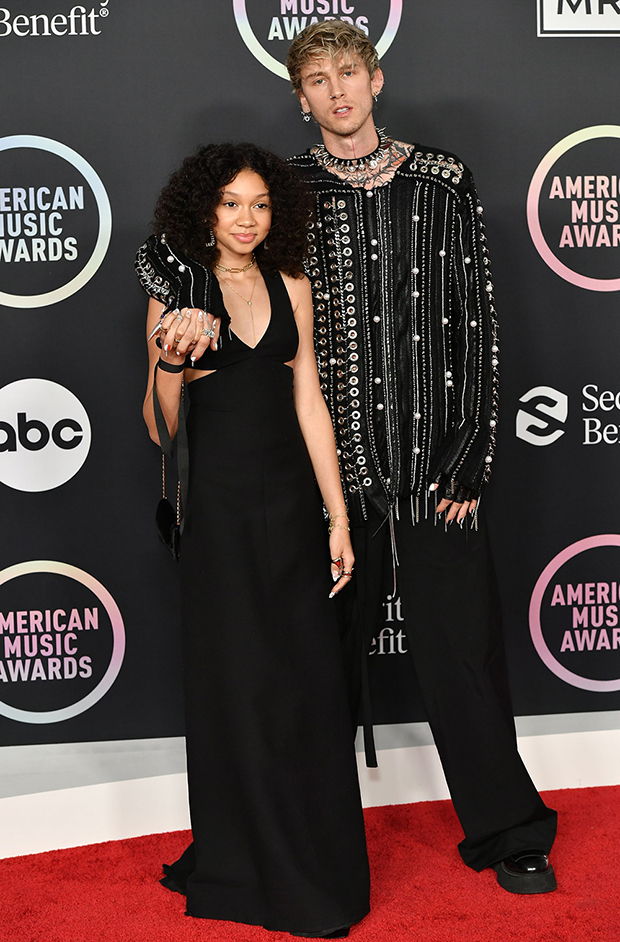 Casie’s look was practically subtle compared to what her father was wearing. The Tickets to my Downfall rocker wore a black outfit with numerous silver grommets, giant pearls, and other metal accouterments. He opted for a spiked dog collar and a silver hoop through his nose. His oversized pants covered what looked like patent leather creepers. It was quite a statement for the AMAs, but leave it to MGK to bring the noise. Despite the loud look, though, MGK was overshadowed by his daughter. “MGK’S DAUGHTER LOOKS SO GROWN, OMG,” one fan tweeted. Others were a bit confused, as they were unaware that Machine Gun Kelly was a father. 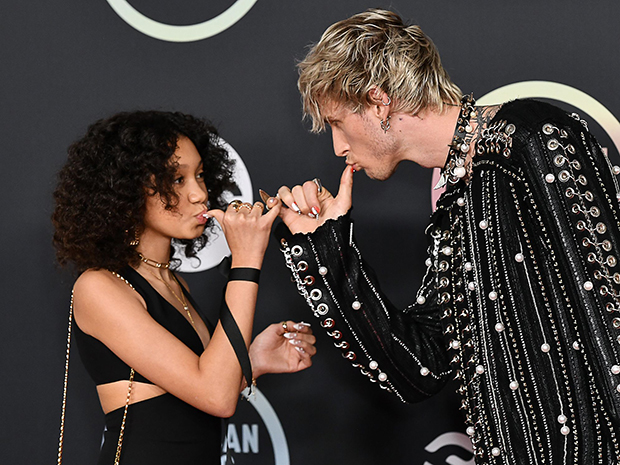 “who is that girl with mgk? Did him and megan finally fall through.” “who is mgk with?” “Did I just see MGK with someone else?? this will get messy.” “whats the tea w mgk n why he on the carpet w a different woman.” Some were quick to point out Cassie’s identity. “SOME OF Y’ALL DONT KNOW MGK HAS A DAUGHTER LMAO,” tweeted one fan.

It’s true: MGK is a dad. He and his ex-girlfriend, Emma Cannon, welcomed Casie in 2009. MGK spoke to Rolling Stone about how fatherhood affected him in 2017. “It didn’t change me until she learned to Google,” he said. “I don’t care what anyone else thinks, but I do care what she sees. So I cleaned up my act a little bit. And I’m speaking to a broader audience now. Not everyone grew up stoked on watching Mötley Crüe doing lines off the bar.”

A few months before this rare public outing at the AMAs, MGK was spotted taking Cassie out and about in Malibu. The two hit up a local smoothie place before doing a bit of shopping. Earlier in the summer, MGK was photographed taking Cassie for a motorcycle ride.