‘Mare Of Easttown’ Recap: Erin’s True Killer Is Revealed & It’s Not Who You Think

Mare finally cracked the case during the ‘Mare of Easttown’ finale. Mare figured out who murdered Erin, and it was one of the last people she ever expected.

The Mare of Easttown finale starts with Jess Riley bringing the photo of Erin and John Ross in bed together to the police station. Jess admits that she and Dylan burned Erin’s diaries because Dylan wanted his parents to keep DJ, and Jess thinks that’s what Erin would have wanted. “I was just trying to honor my friend,” Jess says.

John Ross and Billy go on their fishing trip. John Ross pulls out his gun and prepares to shoot Billy. Before he’s able to pull the trigger, Billy turns around and begs John Ross to kill him. John Ross has the gun pointed straight at Billy when Mare spots them from a distance. 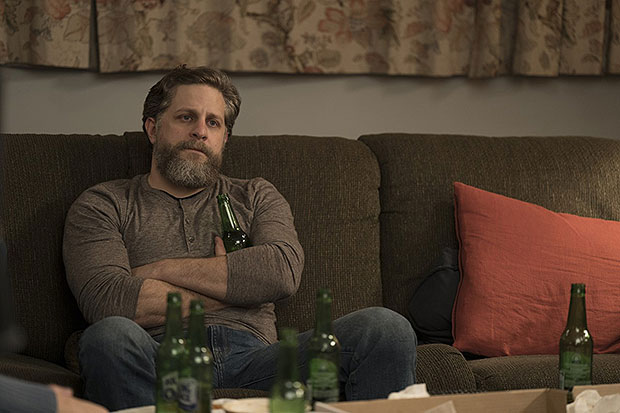 Mare yells at John Ross to put his gun down. John Ross turns the gun on himself, but Billy tackles John before he can kill himself. “Please just f**king kill me,” John Ross says to Mare.

John Ross & Erin Had An Affair

At the station, John Ross reveals to Mare that his affair with Erin started at the family reunion. He says it was more than just sex. “We had this connection,” he says. They would communicate on prepaid phones so Lori wouldn’t find out. John Ross says that Erin threatened to tell Lori everything if he didn’t meet up with her. She wanted him to pay for DJ’s ear surgery.

John Ross tells Mare that he fought with Erin, and the gun hit her hand when he tried to wrestle the gun away from her. Erin threatened to kill herself, and he panicked and shot her. He took Frank home that night so he had an alibi, and Billy helped him dispose of the body. When it comes to Lori, John Ross says that he convinced Lori to lie to Mare and say it was Billy.

Mare goes to see Deacon Mark in prison and tells him that the charges against him are going to be dropped. “Wherever you go after this, I hope they treat you better than we did,” she says. Deacon Mark isn’t going anywhere. “Easttown is my home,” he says.

Before he’s carted off to jail, John Ross gets a moment alone with Lori. He asks Lori to take DJ in and give him a good life. DJ is his son, after all. Lori later takes DJ to get his ear surgery.

Mare and Frank go to mediate with Carrie about Drew, but Carrie is a no-show. Carrie texts Mare to come outside. Carrie admits she hasn’t been sober for months and can’t keep Drew. She’s going back to rehab, so Drew will be staying with Mare.

While out with the family, Frank tells Mare that John Ross’s behavior the night of Erin’s murder doesn’t make sense. He was laughing and having a good time. He acted as if nothing happened. Dylan visits Lori and asks her if she knew DJ was John’s son all along. She admits that she didn’t. Dylan steps up for once and gives Lori money for DJ, from him and Erin.

Mare shows up at Mr. Carroll’s house after he calls. They get to talking and he reveals that his gun went missing at one point. It’s not missing anymore, though. After Mare came over about the prowler, he still had the gun. That night, he heard a noise out in the shed, and the gun was gone. But now it’s back. The gun is a Colt Detective Special, and he shows Mare the gun. Mr. Carroll admits that two rounds are missing from the gun.

Things start clicking into place for Mare. She asks who had access to the shed. It’s just Mr. Carroll and Ryan Ross, who cuts his lawn every summer. Mare runs to the security camera and sees Ryan grab the gun the night of Erin’s murder.

Mare drives to Ryan’s school, and they lock eyes. He knows that she knows. He climbs the fence and runs home. Mare is the one to call in that Ryan is on the loose and wanted in a murder investigation. “It’s Mare. She knows. She’s on her way here,” Ryan cries to Lori. 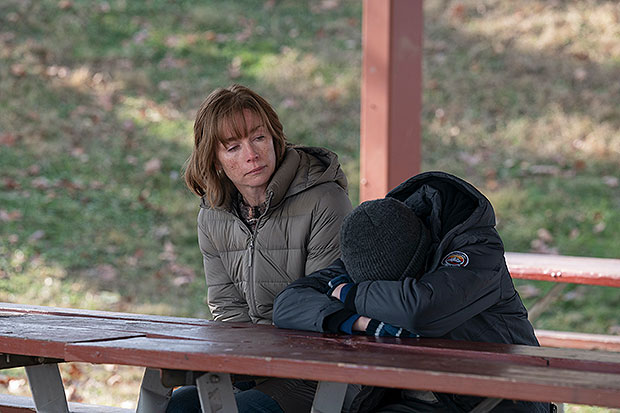 Mare and the rest of the police pull up outside the house. She goes inside and brings Ryan and Lori into the station. He spills everything. Ryan knew about Erin. He found text messages on his dad’s phone and confronted him. John Ross said it was a mistake, and Ryan promised to hide this secret if John Ross ended the affair. Ryan just wanted to keep his family together.

Ryan thought his dad’s relationship with Erin was over. He saw his dad leave the party at Frank’s and overheard him on the phone. When Ryan checked his dad’s phone, Erin had texted to meet at Brandywine Park. Ryan responded as his dad. He went to get Mr. Carroll’s gun and waited for her. He saw her get dropped off by Deacon Mark.

Ryan tells Mare that he just wanted to scare Erin. He told her to stay away from his family. He never meant to kill her. She tried to grab the gun, and they ended up fighting over it. The gun went off once and it shot Erin in the hand. Ryan pulled the trigger again, accidentally shooting Erin in the head. He took the gun back to Mr. Carrol’s shed and called his dad. John Ross and Billy disposed of Erin’s body.

Mare asks Lori when she knew it was Ryan who killed Erin. John Ross told Lori the morning Mare came over. “I agreed to lie to protect my son, and I would have taken that to my grave if you hadn’t shown up to my house today,” Lori tells Mare. Ryan apologizes for what he’s done. Mare escorts Ryan to the police car before he heads to juvie.

Lori breaks down in tears over what’s happened to her family. Mare gets in the passenger seat. Lori asks Mare why she couldn’t just leave it alone. “My whole family is gone now because of you,” Lori says. She screams at Mare to get out of her car. Months later, Lori goes to visit Ryan and brings DJ to meet his brother. Mare goes to see Lori. They embrace and they collapse onto the floor as Lori cries in Mare’s arms. The series ends with Mare finally going up in the attic to come to terms with her son’s death.