My best friend canceled her wedding and eloped. Here’s how I planned her virtual bachelorette party with 18 friends across the world for less than $100. 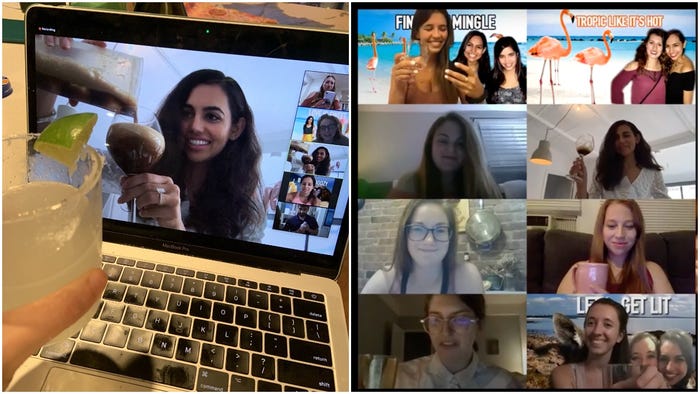 Like many other couples this year, my best friend Kisha and her fiancé had to cancel their wedding in April.

They planned to get married in Australia, where they live, but after the pandemic hit in March, they called off their wedding and all of their guests who were supposed to fly in for the big day — myself included — canceled their flights.

When Kisha and her fiancé decided to elope this summer, I realized the best way I could still be there for my best friend was to throw her a virtual bachelorette party.

I've planned many parties in my personal and professional life (I previously worked as an events manager), but planning an online event was a new challenge for me. I worried that without the traditional bachelorette party elements, it would be boring.

After preparing for a month with two friends from college, I emceed a three-hour marathon celebration on Zoom for 18 people across the US and Europe with games, personalized "decor," and cameos. And I discovered that a virtual party can still be fun and memorable — and anyone can do it without expensive tools or expertise.

One guest said the virtual bachelorette party was the most engaging Zoom she'd been on, and the bride said it was the most fun she'd had during the pandemic.

Here's how we pulled off a fun virtual bachelorette celebration.

We planned a packed agenda for the virtual bachelorette party, and relied on PowerPoint to give the event a seamless feel

We planned the bachelorette party down to the minute to avoid any boring moments or awkward silences; after all, there were many people joining and some of us hadn't met before. The evening included games, a show-and-tell, and a toast all strung together with a thorough PowerPoint presentation.

My cohosts and I planned through emails, phone calls, and Google Sheets with assigned tasks. We did a "pre-production" call to run through the agenda and test the activities, which was key to smoothing out the process. Guests received the schedule ahead of time with a few simple things they had to do — we wanted it to be low lift for them — and to tell them what to expect so they'd be excited. Make sure to have at least one host (this was me) to lead the party.

We told Kisha to join 10 minutes late so we could troubleshoot tech issues and prepare the "decor" — in this case, Zoom backgrounds — before she arrived. I was grateful for my cohost, Kristen, who could help from her computer and let me know that no one was laughing with me when I was sharing the wrong screen.

You can still have decorations at a Zoom party

We took full advantage of the Zoom background feature. I did an audit of each attendee's social media to find a picture of them with Kisha, my friend Kristen found bachelorette phrases (for example, "let's get lit" and "drink up beaches"), and my sister used those elements to create custom backgrounds on Photoshop.

You'll want to make sure you test the backgrounds ahead of time; I sent the guests my own visual instructions on how to access Zoom backgrounds on desktop and mobile, but our 10-minute "tech window" worked just fine.

We asked everyone to wear the same color — pink — and instructed Kisha to wear bridal white. She brought out the sash, veil, and balloons we sent her ahead of time for the occasion.

Naturally, we kicked things off by making drinks

Our friend Jen and her husband (he made a surprise cameo) had taken a cocktail class, so they got the job of teaching us how to make the "his and hers" drinks Kisha had planned to serve at her wedding.

We had asked guests to contribute an optional $5 to $10 toward buying Kisha alcohol and decoration and sent them the ingredient list ahead of time to follow along.

Next, we played a game called 'Would Kisha Rather?'

Kisha answered 25 "would you rather" questions that one of the guests had found before the party. I used PollEverywhere for this game because it was interactive, I could include images, and it revealed the winner for each question and the game. You can also set a limited amount of time to answer, which moved things along. And it was free!

I shared my screen with the PollEverywhere site up, and guests followed along on their own desktop or phone to answer. During all the games, I narrated the questions and guests stayed unmuted to chat while we waited for everyone to answer.

We took a page from the TV show "The Bachelorette" and offered the winner a rose and one-on-one time in a breakout room with Kisha. She accepted.

After a competitive game, we moved on to an activity where everyone's a winner

Guests came prepared to talk about a memory with Kisha, and because we didn't hire a stripper it was a good opportunity to show some "Magic Mike" GIFs.

We then played the game, 'Where in the world is Kisha?'

Kisha is a huge traveler, so I combed through her social-media profiles for pictures of her in different places in the hopes of putting together a mini geography quiz for the group.

I couldn't find a free quiz software to facilitate this activity, so I stuck with good old PowerPoint.

Each slide had a picture of Kisha in a mystery destination with a hint. Kristen timed 30 seconds, then Kisha revealed the location as I clicked to the answer slide. This time, we relied on an honor system to determine the winner.

Then, we moved on to a game of 'who gifted the underwear'

We modified this bachelorette game to be digital friendly, where everyone sent me a link to underwear they liked for Kisha. (This was for the purpose of the game only; we didn't buy her any of it to avoid extra costs and international shipping.)

I put the images in PowerPoint alongside captions like "White cotton Brazilian briefs with a veil-like behind. Bridal elegant!" and included personal hints.

This was a good last game since by this point we had all warmed up (and had a cocktail or two).

We ended the night with a toast

It was getting late, so Kisha shared a few words for a toast before we logged off.

Kisha said the party made her feel special and loved before she got married, and it was the next best thing to seeing everyone in person. Guests had fun, too. The awkward moments added to the laughs, and we got to record the whole thing for Kisha to revisit.

The upsides of an online celebration are that more people can attend, costs are much lower than a live event — each person contributed up to $10 for Kisha's decoration and alcohol — and no one has to corral drunk friends.

Even though it was online, it still took a lot of planning — and it was definitely worth it.