Strolling through a piazza with friends, I was introduced to Vito. As we shook hands, I noticed his wild, dark hair. I felt a spark and still do, nearly six years later.

Then 26, I had just moved from NYC to a small town in Italy called Guardia Sanframondi, to start afresh. I’d grown tired of the fast city pace and craved a calmer existence. The idea of meeting someone along the way never crossed my mind.

But there stood Vito, an artist with strong cheekbones and sweet, soulful eyes. Our instant attraction was mutual. At the time, he was 49 years old —23 years my senior.

I admit that initially, I didn’t realise our age difference. Vito looks much younger. I wasn’t looking for anything serious, so I figured, ‘why not?’

For me, age has always just been a number so his years didn’t faze me. I wasn’t thinking about the difficulties we could face due to being born two decades apart, and it didn’t seem to bother Vito either. 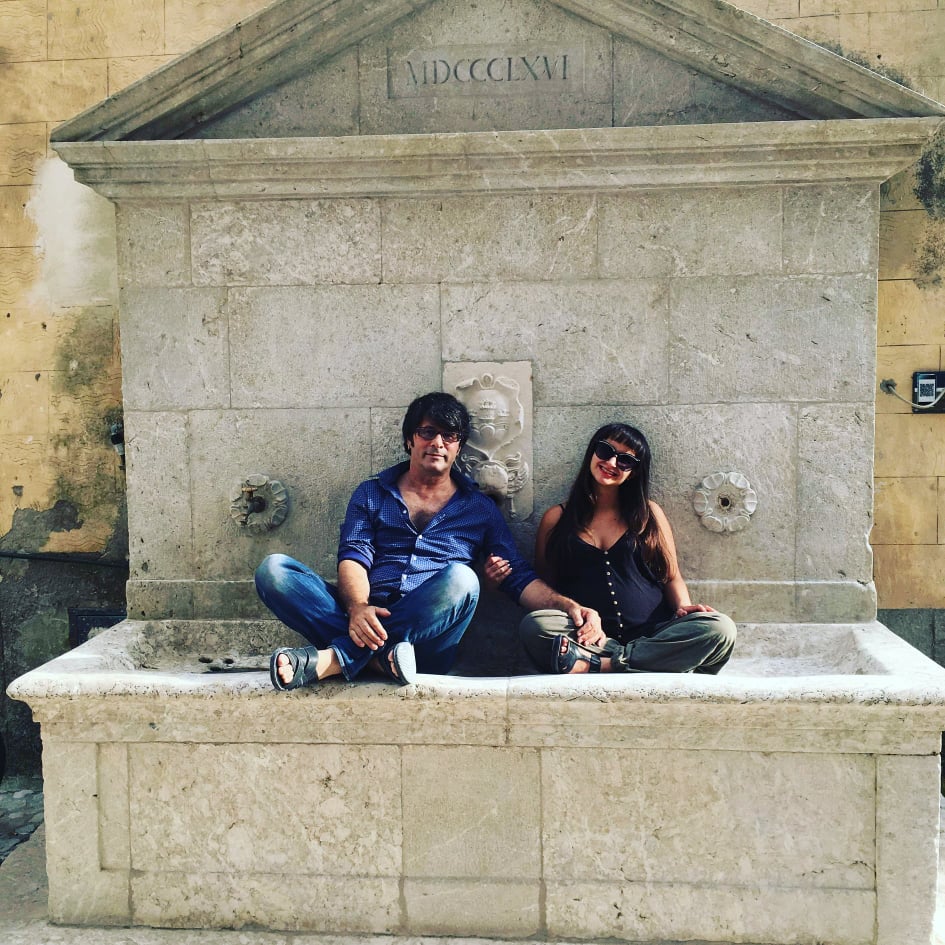 We were like lovesick puppies, totally smitten. It felt like we had always known each other. We could spend hours talking, dancing or just being in each other’s arms listening to music watching the sun set. It felt right.

As a newcomer in town, I was nervous about being judged, especially if it wasn’t serious. So, we kept our relationship secret for almost a year. Only my mother knew, and she was initially not that thrilled.

After a year of dating, we decided to move in together. After six months, one evening, while Vito and I cuddled on the sofa, the topic of our future arose.

Vito had been married 15 years earlier and has a son, who’s one year younger than I am. Sometimes it feels odd to ‘technically’ have a stepson, but it causes no issues. He’s a wonderful young man and is part of our family.

As Vito and I spoke, I told him how much I longed to be a mother and he was excited at the prospect of becoming a dad again. As we discussed plans, I said casually, ‘perhaps we should just get married.’

He looked at me with a huge grin and said, ‘Of course, I want you to be happy.’ There and then we were officially engaged.

A few weeks later, Vito took me to Puglia, three hours further south, to introduce me to his family. I got the feeling his mother, an old-school Italian, did not approve of her son remarrying.

On the other hand, my mom warmed to Vito and welcomed him. She saw how much he loved me, and my father and Vito got along beautifully.

In late February 2017, we flew to NYC and married on 8 March in front of my parents before celebrating with lunch at one of my favourite Italian restaurants. It was sweet, simple, and special… exactly the way I wanted it.

Before long, I was pregnant and in September 2018 we welcomed our little princess, Lucia-Antonia. Becoming a mom was my dream – I was in complete bliss.

Vito handled becoming a father again, at 52, perfectly. He helped in every way that dads should. He changed diapers, rocked our daughter to sleep and often stayed up with her so I could rest.

My parents were overjoyed to have their first grandchild and, while the news was met well by Vito’s family, it has always seemed as though we are an afterthought. Don’t get me wrong, his family is lovely, but I will admit that due to our age difference, I will never have the extended family that I once imagined.

I always pictured raising my daughter around cousins and doting aunts and uncles, but oh well. You can’t have everything in life.

Vito’s sisters are closer to my mother’s age so there have been no long lunches and shopping outings with my sisters-in-law. And while I have four wonderful nieces through marriage, they are nearer my age so, understandably, they have never once called me ‘aunt’.

Our marriage is far from idyllic – whose is? – but my husband and I love each other and that’s what counts. However, I want to be truthful about the realities of marriage to an older man that I hadn’t considered when we first met. I didn’t know anyone in a similar situation to compare it to.

We have certainly had some hiccups that are specifically related to our generational differences. For example, he seems to think that just because he was previously married and had a child, that he knows more than me about parenting. I disagree.

I have maternal instincts beyond that which a man can ever understand. Men can’t begin to understand what a woman feels as a mother — heck, my daughter and I were one person. She grew inside me and felt everything I felt, and vice versa.

Plus, because my husband’s much older, he and I have different views that can affect our daughter. I want to home-school Lucia-Antonia. Vito does not.

When we don’t see eye to eye on certain issues, we talk things through. But we decided that, since I am a stay-at-home mom, (who also works from home), I make the final call. He agrees why that makes sense.

Then there’s my husband’s age – now 55 – naturally, he doesn’t have the energy I do as a 32-year-old. Especially when it comes to running after our energetic toddler. But he more than does his fair share taking care of us – and I’m happy to have the extra exercise!

Also, I want another child, as does my husband but, reasonably so, he is concerned about having a new baby as well as a toddler in his 50s. I’m aware will be stressful but that’s always the initial period welcoming a second child, regardless of age. Lucia-Antonia will be an excellent big sister, so we’re determined to make it happen.

Ultimately, we are both at different parts of our lives. Vito’s already had a family and a career (he still works as an artist) whereas I’m just starting this new chapter of being a wife and mother, all while working at home as a writer.

But I do think society puts too much focus on age. When people see an older man with a young woman, they immediately think one of two things: 1) He’s rich or 2) She’s got daddy issues. In our case, neither of these things are true — Vito isn’t rich, and my father and I get along great. We just connected; we’re each other’s missing puzzle pieces.

I have never regretted marrying my husband because we were meant to be. For one thing, I never wanted to get married. When I had been in serious relationships in the past, I ended them before things went further. Whereas, when I met Vito, I often I thought ‘this is it.’ And I was right.

When it comes to couples with similarly large age gaps, I can’t stress enough how important it is to discuss everything before getting married – money, where you want to live, children, etc.

Vito and I agreed it all ahead of our nuptials, which made for a smoother transition. While it didn’t solve some of these issues, we both knew we were on the same page and were working as a team.

Relationships of any kind need lots of work. There needs to be understanding, acceptance and compromise to make it right. These are tests in any partnership but especially those with an age difference.

The one thing I try not to think about is how we most likely won’t get to grow old together. It’s too painful. On rare occasions, my husband and I have discussed this, and I have broken down in tears.

While Vito’s in incredible shape, I must be realistic, he is 23 years older. But nothing in life is guaranteed – no couples know how much time they will have together. Either way, it’s all worth it.

We know there will be a lot that we will miss out on together, like welcoming grandchildren and travelling the world in our pension years. But I remind myself that what matters most is now.

Metro.co.uk’s weekly The Truth Is… series seeks to explore anything and everything when it comes to life’s unspoken truths and long-held secrets. Contributors will challenge popular misconceptions on a topic close to their hearts, confess to a deeply personal secret, or reveal their wisdom from experience – good and bad – when it comes to romance or family relationships.