Nancy Cartwright, The Voice Of Bart Simpson, Is Probably Watching Your Instagram Story 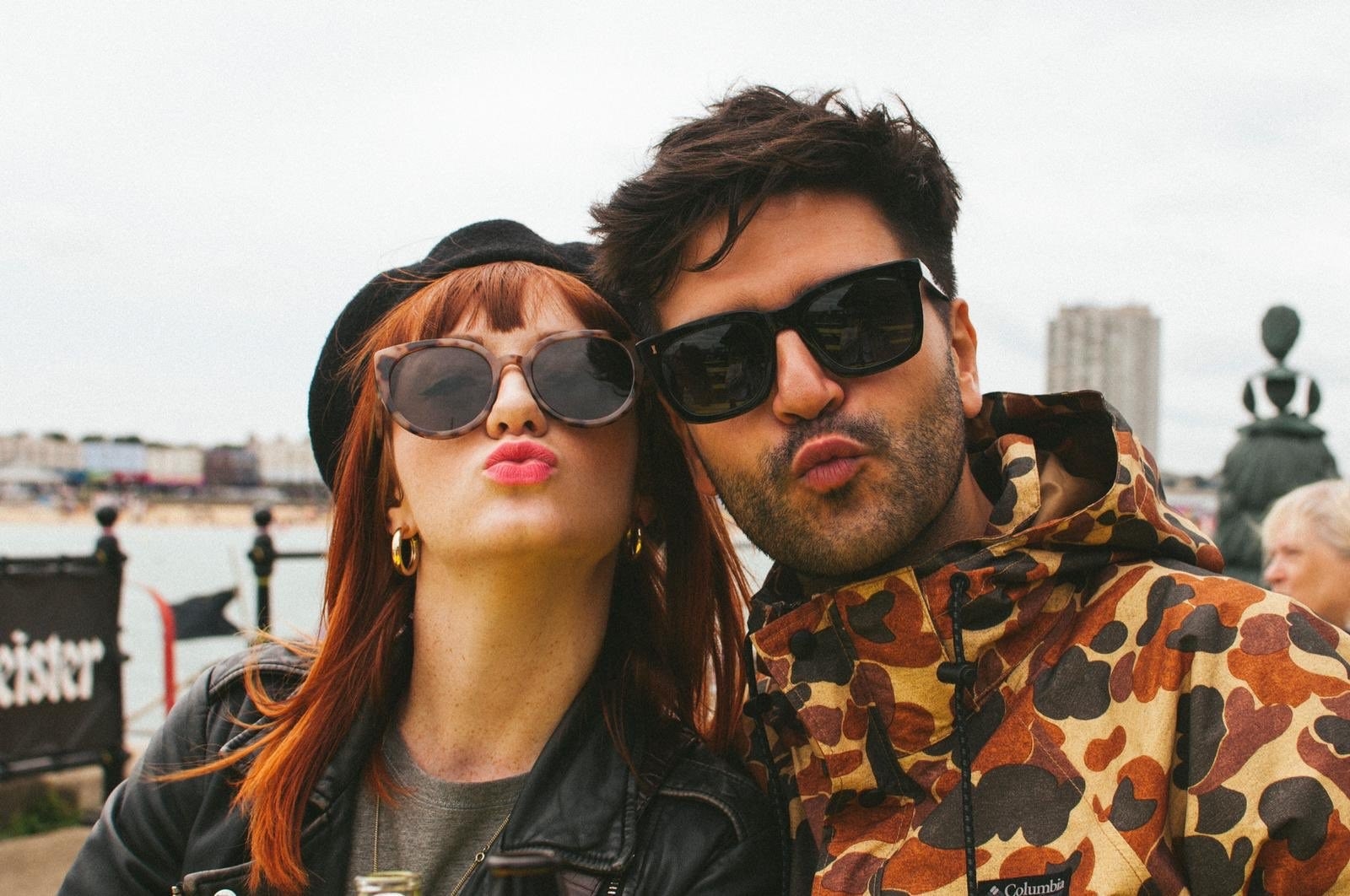 Dan Alani, a 28-year-old radio host in London, was scrolling through his Instagram stories last week when he noticed something odd.

Nancy Cartwright, the long-running voice actor behind Bart Simpson, was among the 119 people who had viewed a nondescript photo he had shared of his equipment from a band practice.

The Simpsons star is not among Alani’s roughly 1,500 followers, and the two have never met in person.

Still, Alani was thrilled at his brief online brush with stardom. 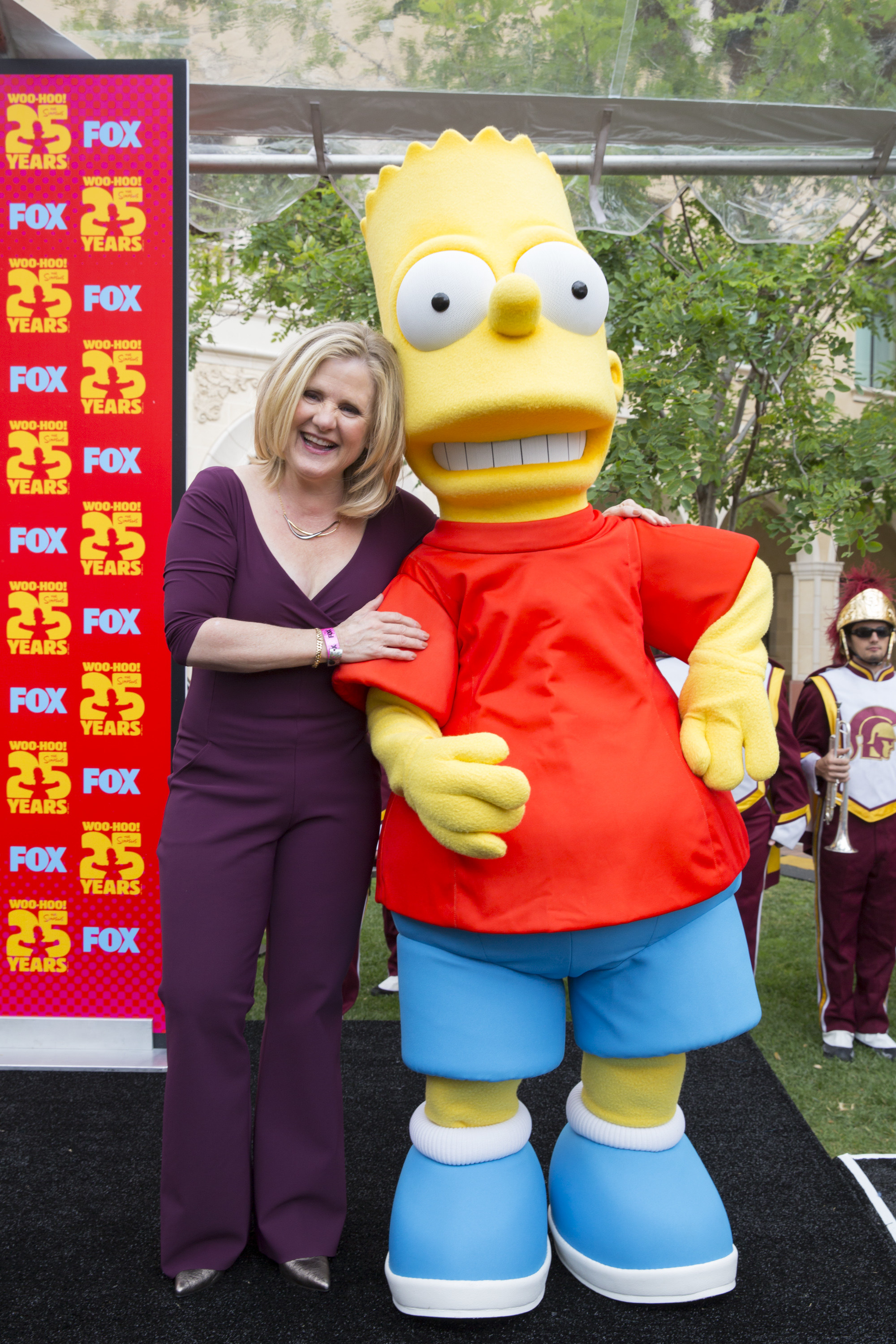 “When I was a kid, my education came from The Simpsons first, and school second,” he told BuzzFeed News. “So to find out Bart Simpson herself had the faintest idea of who I was, needless to say it was quite a rush.”

A few days later, on March 1, he noticed Cartwright again taking a look at an Instagram story he had shared celebrating a 15-mile run he had completed.

“Then I started to wonder what had brought me to Nancy Cartwright’s attention: why did a certified TV legend show an interest from a random dude like me across the Atlantic?” he said.

Alani hypothesized it was perhaps because of his occasional voiceover work. Maybe she had stumbled upon him through connections on the Instagram Discover page?

That was until Wednesday, when Alani came across a tweet from a British DJ/ producer friend asking about Cartwright.

Alani’s girlfriend, Rosie Percy, then did some quick sleuthing and discovered there were a whole bunch of people wondering why Cartwright was suddenly taking an interest in them.

Indeed, a simple Twitter search reveals a ton of people posting about close encounters of the Cartwright kind in recent weeks.

“Tell me why Nancy Cartwright viewed my Insta story???” wrote one person.

“The strangest thing to happen to me in 2020 is Nancy Cartwright (or possibly whomever runs her IG account) regularly watching my IG stories,” said another.

“Who knew that my thoughts on Taco Bell in Melbourne would attract the attention of Nancy Cartwright (aka BART SIMPSON) to view my insta-story,” said yet another person, “and yeah sure it’s probably a random on her social media team but god dammit this is my one step closer to being on Simpsons!” 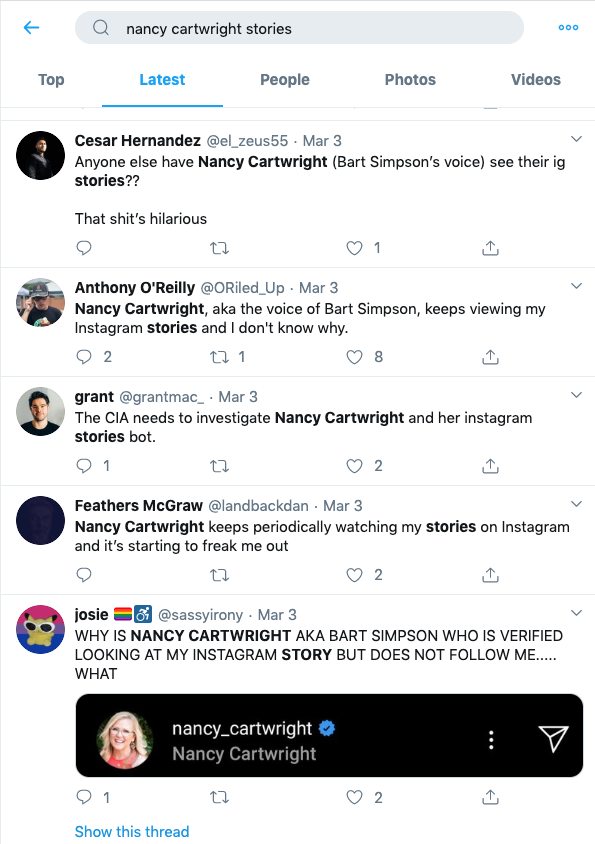 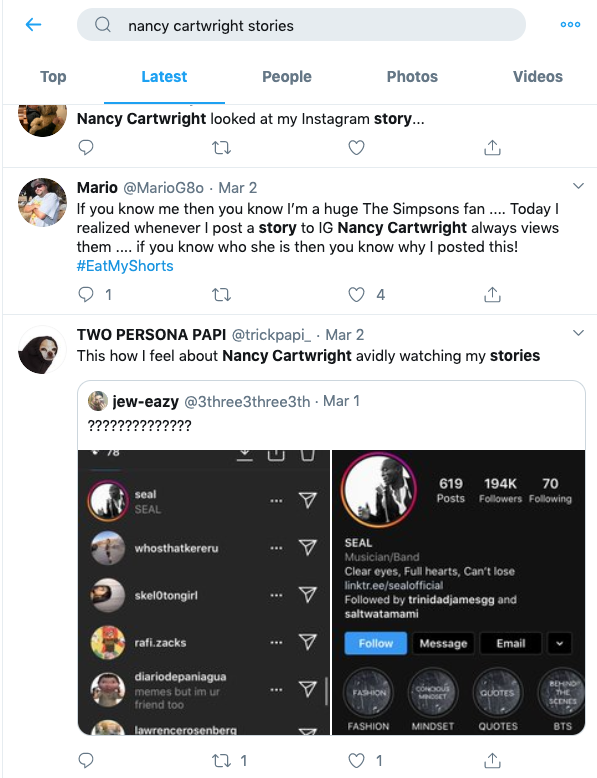 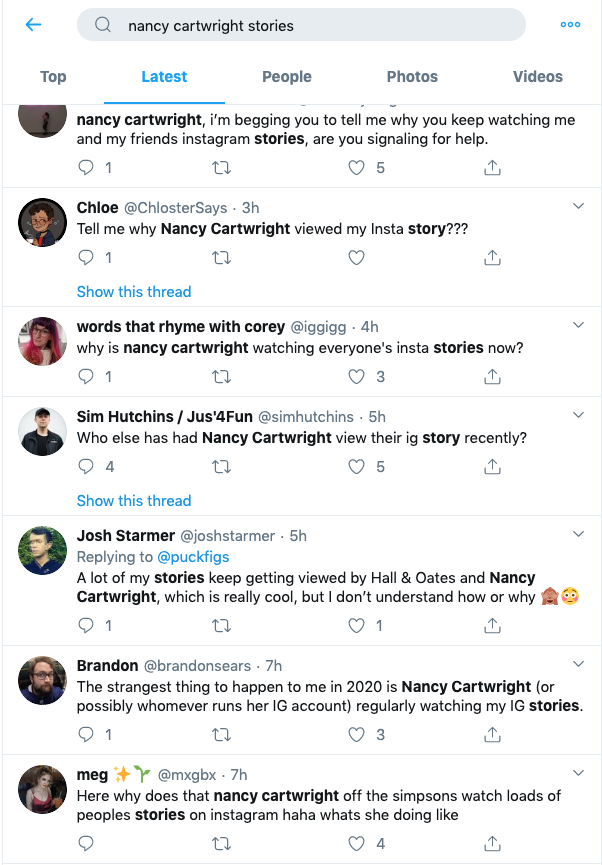 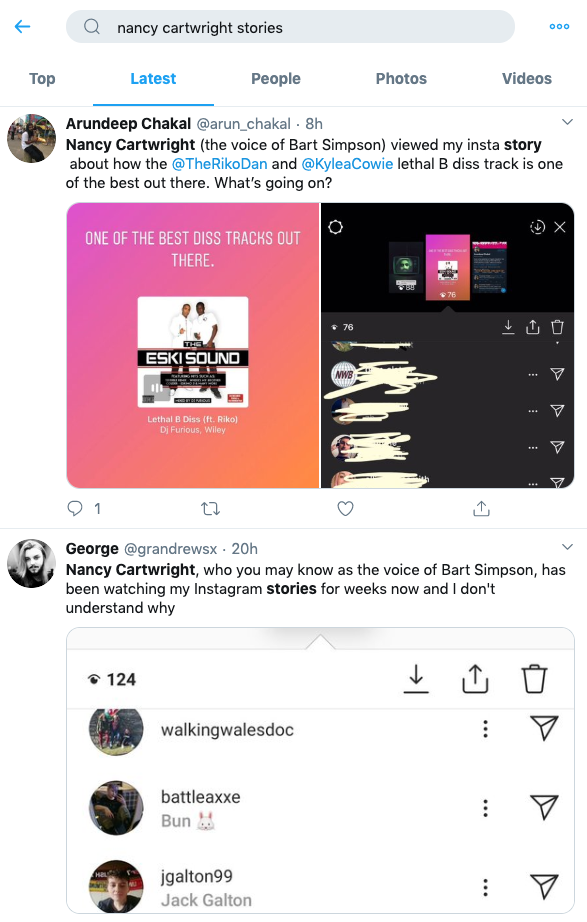 A BuzzFeed News search found the tweets go all the way back to Jan. 27

As it happens, according to social monitoring platform Crowdtangle, that’s also when Cartwright’s followers suddenly exploded from a steady 65,000 to almost 85,000 as of Wednesday. 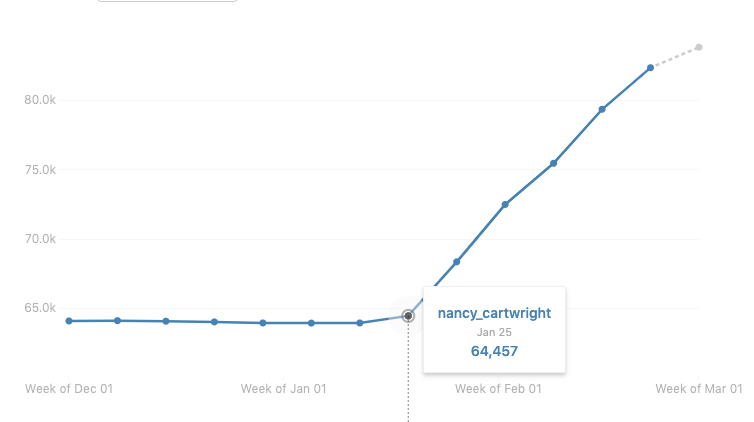 Yes, it appears the Instagram story-viewing is part of a growth campaign by the star’s social media team.

In October, Slate wrote a big piece about people encountering stranger influencers suddenly viewing their stories, calling it a “mass storyviewing” strategy. The accounts use bots to make it appear as if they are suddenly taking an interest in you.

Much like you might click on a private meme account when a friend sends you a link, if you notice a strange person looking at your story — let alone a strange celebrity — you’re probably going to be inclined to check them out.

That Slate piece noted the trend was growing in popularity in English-speaking countries, with several apps now offering the service for a fee, but seemed to suggest it was a strategy mostly for wannabe influencers. Cartwright, it appears, is one of the more famous people to employ it.

A quick review of Cartwright’s Instagram reveals she is certainly making an effort to provide fans with content. Around mid-2018, she appears to have begun posting almost exclusively polished and professional photographs shot in staged settings, rather than selfies or pictures from her phone. 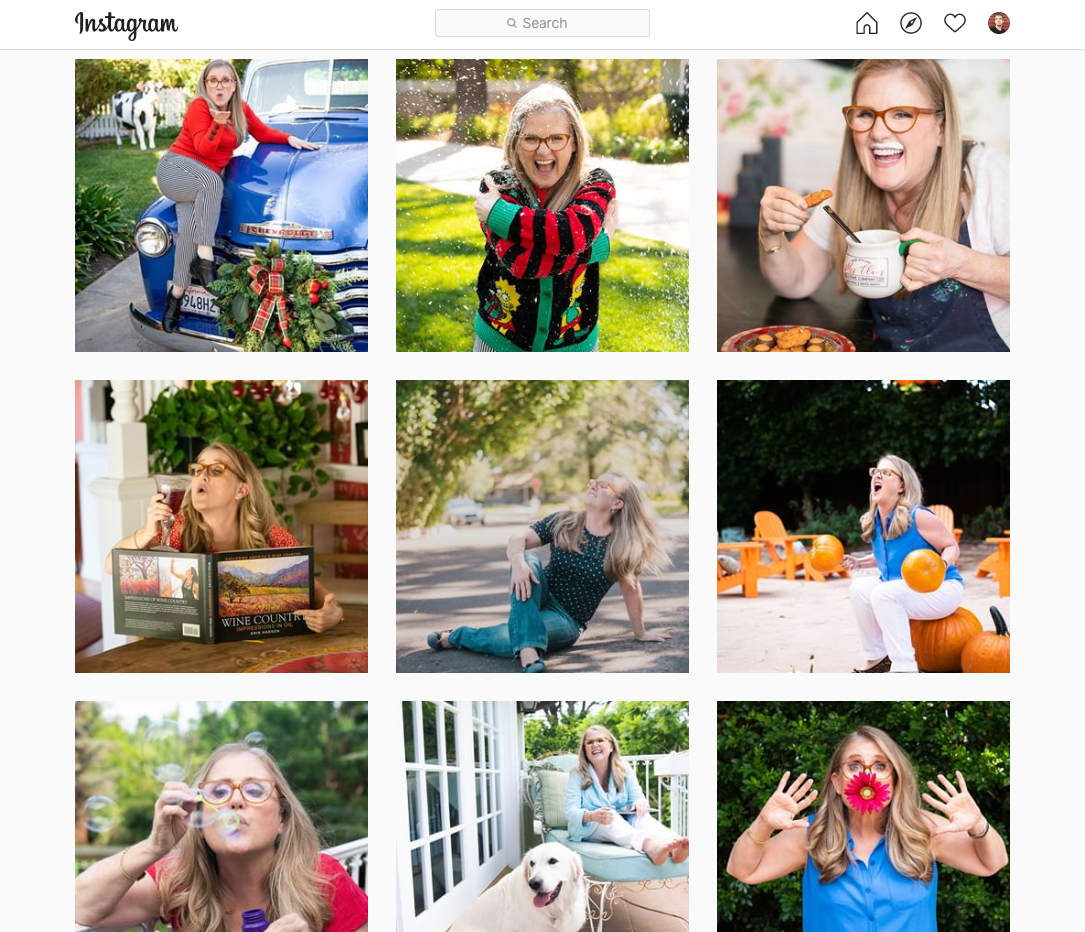 A publicist for Cartwright said she would reach out to the star’s social media team for this story, but they didn’t immediately respond to BuzzFeed News.

And for what it’s worth, the strategy doesn’t seem to have worked on Alani, the British radio host.

He didn’t follow Cartwright after he noticed her in his Story views.

“I’d respond much better to someone sending a message request, or commenting on a post, rather than viewing a story with no other context around that interaction,” he said.

Percy, his girlfriend, also has questions about the strategy.