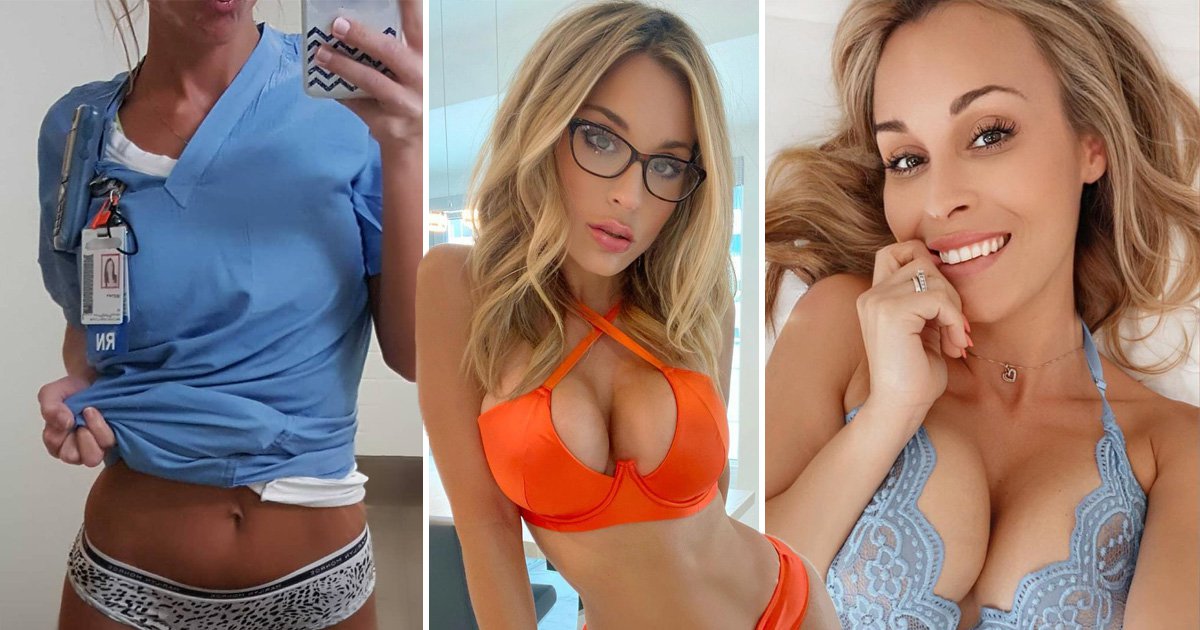 Allie Rae* worked through the pandemic as a nurse until her colleagues found out she’d started selling X-rated content in her spare time.

After that, Allie, who was based in Boston, Massachusetts, but is now in southern Florida, says she was ‘pushed out’ of the job.

Allie started out by posting ‘fairly racy’ photos on Instagram before graduating to OnlyFans on the recommendation of people in her then-small fanbase.

She tells Metro.co.uk: ‘At that point, we were like “Oh OK, this is very minimal effort… let’s put some time into this and see what happens.”

The ‘we’ she refers to consists of Allie and her husband of 18 years, who prefers to stay out of the limelight.

However, he does on occasion get involved in creating pay-per-view videos with his wife.

Allie says: ‘In the beginning, he wasn’t in any images or videos or anything like that.

‘It’s mainly me, and it was a decision we always made together.

‘We have great communication and are a good team.’

‘He knows I don’t sleep with other males, so if we want to sell that type of content, he knows he’s got to participate.

‘But he doesn’t show face or anything, we definitely crop all that off.

‘He doesn’t want to be in the limelight, but it’s fun… it’s a little liberating. You’ve got to take it light-heartedly.’

Even though the money she earns through sex work far and away surpasses what she was earning as a nurse, Allie hadn’t wanted to leave nursing, because she enjoyed the work.

She says: ‘It was kind of an ongoing joke between my husband and me.

‘I continued to work until people started to discover that I had an OnlyFans, and that’s when I was pushed out of working, in my opinion.’

She doesn’t know who, but Allie says a person or people brought her Instagram to her manager’s attention, at which point they discussed their social media policy with her, with ‘no problem’.

‘Then a couple months later,’ she says, ‘I get called back into my manager’s office, and they had screenshots of my OnlyFans.

‘They had blurred it out and stuff, but they had said that there were nurses on the unit that were uncomfortable with the fact that I had an OnlyFans and the things that I was doing online.

She claims she was told the issue would be taken up with HR, but a couple of ‘uncomfortable’ months went by before she heard anything more.

‘I felt like people were talking about me,’ Allie says.

She adds: ‘I knew that the material they had presented to my management was material they would have had to pay for, so that made me feel like it was definitely a little bit vindictive.

‘They were going out of their way to bring this to management’s attention.’

When she was ultimately told that she’d have to stop her work online or face losing her job, Allie left.

Allie felt confident she would have been able to ‘come out on top’ if she’d escalated the matter and taken it up with HR, but she no longer felt happy working in that environment.

She tells us: ‘I never could understand how this directly affected the unit. I can understand staff having an opinion on it, but people have opinions on other staff’s political views, you know?

‘How was this any different?’

She says that by then, she no longer felt respected by her colleagues.

‘I felt like people didn’t look at me as the same professional that I was,’ she adds, ‘and I was an incredibly educated, very senior nurse on the unit – highly respected.

‘So I felt like their perception of me had changed as well.’

Not long after the news of the now-reversed ban on adult content on OnlyFans first broke, Allie told us she wasn’t concerned about having to ‘rebuild’ on another X-rated content-friendly site because ‘every creator on only fans drove their traffic there themselves.’

‘They built that themselves,’ she added, ‘because there’s no search feature on OnlyFans and so these fans that we have found us and came to us because they wanted to.’

Even though she wasn’t planning on deleting her OnlyFans page altogether, she said that, in her opinion, the company was making a mistake.

She said: ‘If they think they’re going to escape their reputation as an adult industry, sex work website, I think they’re crazy.’

After the company announced a u-turn on the ban following a backlash from the public, we caught up with Allie again to ask her thoughts on the matter.

She tells us that, while she’s pleased she ‘stayed calm and didn’t run to jump ship to another platform straight away’, the company’s ‘wishy-washy’ decision-making makes her feel ‘insecure’.

She says: ‘This reversal is great news for creators, but I still think creators will be bitter with OnlyFans and have lost a little bit of trust and security with the platform.’

‘I think ultimately creators will continue to build a backup page of some sort on another platform,’ she adds, ‘because we fear OnlyFans could do this to us in the future again.

‘I think trust has been broken.’

*Not her real name.

Get in touch by emailing [email protected]