Online retailer Oh Polly has been accused of ‘breeding body image issues’ after a size 16 shopper revealed how poorly the brand’s clothes fit her figure.

While YouTube star Adeola found the dresses slipped on easily, Fareedah found the size 16 dresses weren’t properly cut for her shape, particularly around the busts, which were far smaller than the J cup she usually wears. 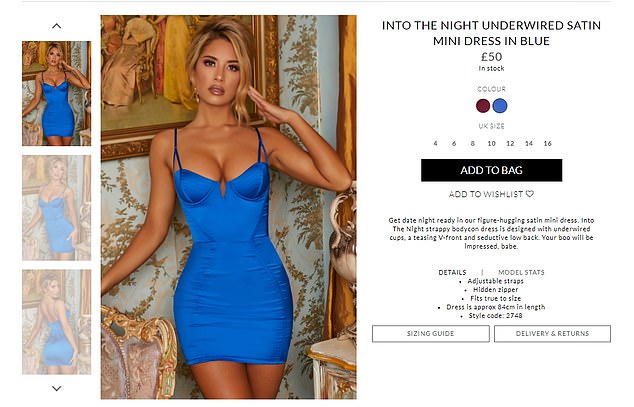 Fareedah Patronne, who wears a size 16, and her sister Adeola, who wears a size 10, ordered the same dresses from UK-based label Oh Polly and tried them on in a YouTube video to show how they fit. One of the dresses they tried on was this £50 satin design 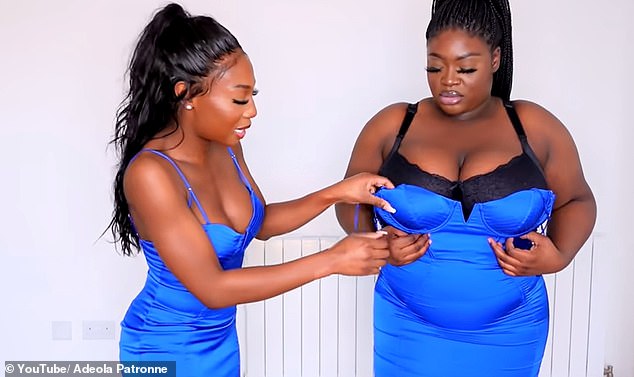 While size 10 Adeola found the dresses slipped on easily, Fareedah found the size 16 dresses weren’t properly cut for her shape, particularly around the bust, which were far smaller than the J cup she usually wears. Pictured, the sisters in the dresses

Viewers were unimpressed with the sizing and argued Oh Polly are ‘breeding body image issues’.

The sisters, from London, began the video by discussing their sense of style and revealing their clothing sizes.

Adeola said: ‘We’re trying on dresses from Oh Polly. I thought it would be quite good because they always have the nice slim, curvy girl and you never really see like plus size girls in their dresses.’

The first dress they tried on was the £45 Ruch Me Up Halter Neck Ruched Mesh Midi Dress In Blush.

Comparing the fit of the dresses, Adeola said : ‘It’s mad how different it is and I feel like it’s longer on me as well. You probably wouldn’t be able to wear it without a bra’.

The second dress was the £50 Into The Night Underwired Satin Mini Dress in Blue. 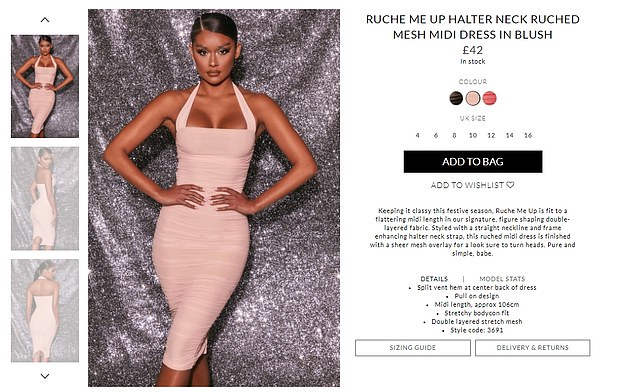 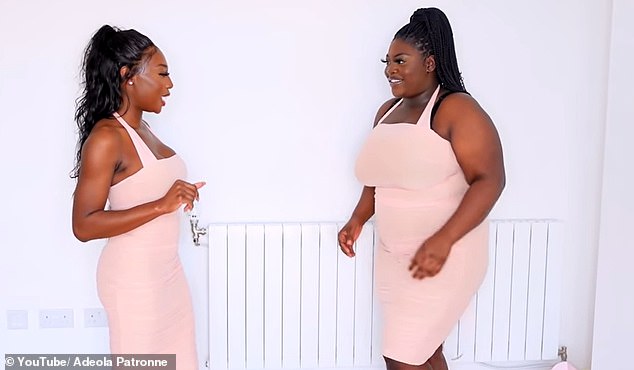 Adeola (left) who wears a UK size 10, spotted the dresses were longer on her, despite being the same style. She also said she could get away without a bra, while her sister would need one 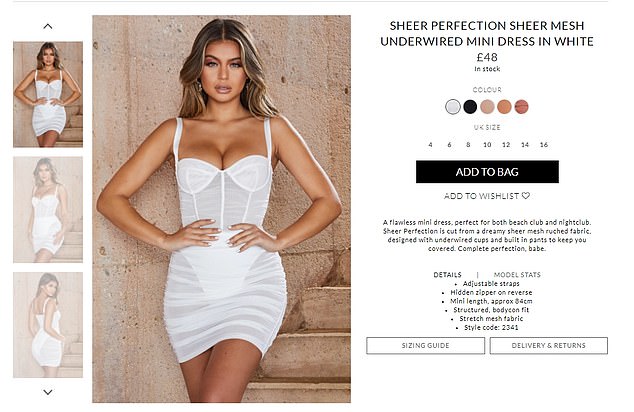 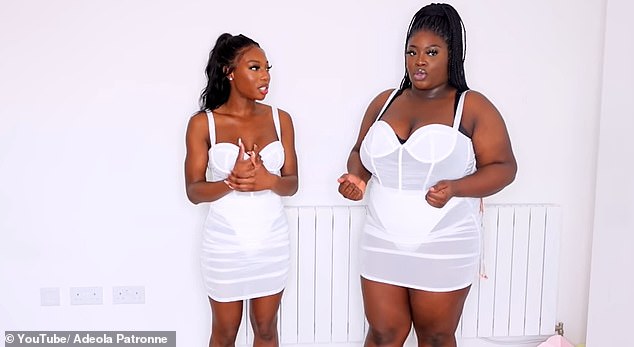 Adeola Patronne  (pictured left)who lives in London, teamed up with her sister Fareedah (pictured right) to review items from Oh Polly on YouTube

The sisters burst out laughing after seeing how it was unable to fit around Fareedah’s bust.

Adeola said: ‘Do you know what it is, I feel like they do a size 16 but they’re not doing size 16 bust.’ Agreeing, Fareedah joked: ‘The bust is not busting’

‘That doesn’t really make any sense if you think about it. Although you can be a size 16 and have small boobs. They’re not really doing it for the big bust babes,’ Adeola continued.

Fareedah admitted she was disappointed, saying: ‘I’m really gutted right now. I wanted it to fit. On you I think it looks really nice.’

The sisters noticed the same problems around the bust area as well as a difference in length with the £35 Say Less Plunge Neck Ruched Mini Dress In Olive. 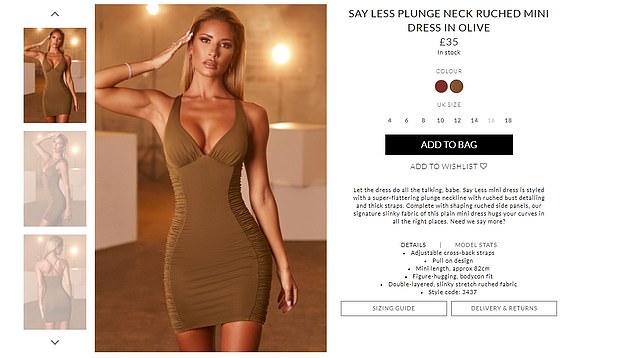 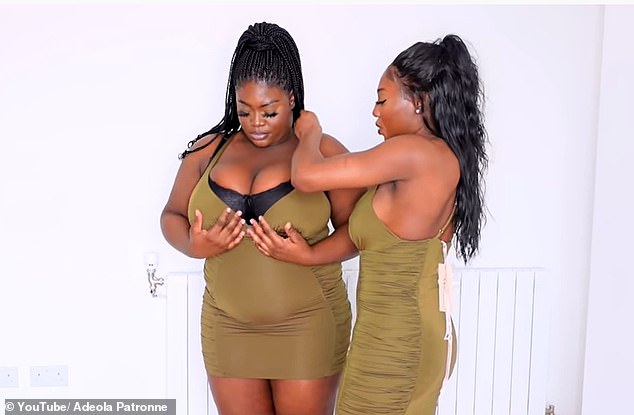 Adeola said Oh Polly should introduce a section of their site dedicated to women with a fuller bust, after spotting Freedah’s visible disappointment

Seeing Fareedah’s visible disappointment, Adeola said: ‘That’s actually annoying. Big boob people go through a lot. The outfit can be really nice and then the breast will mess it up.’

Adeola added: ‘I feel like Oh Polly need to do a big bust section, because their dresses are quite cuppy. If you’re a size 16 but also quite busty it doesn’t really make sense. Don’t make it in a plus size, if you’re not going to cater to the whole plus size. Plus size isn’t just hips.’

The video was met with comments from people who urged Oh Polly to improve their sizing.

One person wrote: ‘This shows how these companies don’t make dresses/clothes for bigger girls. How is that a size 16 if the breast cup and cut of the corset doesn’t change… I’m actually mad. These are the things that breed body image issues, now you start thinking maybe something is wrong with me… they were all average looking dresses.’

Another added: ‘I can’t with the bust… I am so angry seeing how no effort was made to their bust measurement for bigger sizes… Like why though? You two look sweet as always.’

A third added: ‘I’m also really proud of your sister embracing her size like this, makes me feel a lot better. I’m also a size 16 and so conscious about my boobs and arms’