As football around the globe remains suspended because of the coronavirus pandemic, BBC Sport’s chief football writer Phil McNulty takes a look at his top 10 favourite football matches.

From World Cup finals, to Premier League finales, to Champions League epics, he revisits the matches that he has been at and reported on that have really stuck in the memory.

You will get the chance to have your say on your own top footballing matches and moments in a live text on the BBC Sport website from 11.30 GMT on Thursday. 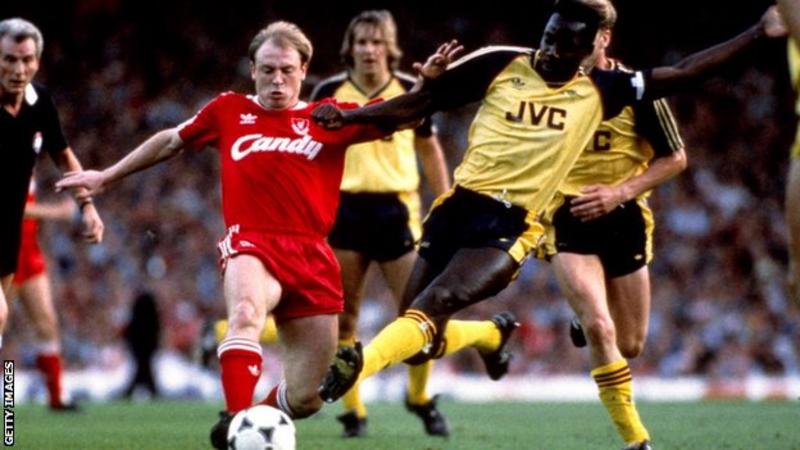 This was the First Division title decider played out at Anfield in late May – a fixture delayed because of the Hillsborough disaster at the FA Cup semi-final with Nottingham Forest on 15 April that claimed the lives of 96 Liverpool fans.

Arsenal needed to win by two goals to take their first title since 1970/71, anything less and Liverpool were champions.

Anfield was calm until Alan Smith glanced home Nigel Winterburn’s free-kick shortly after half-time to give the visitors the lead.

In a nerve-shredding atmosphere, Liverpool midfielder Steve McMahon famously signalled ‘one minute’ to his team-mates but that was all Arsenal needed.

As the great ITV commentator Brian Moore offered the words “it’s up for grabs now”, Michael Thomas decided the destiny of the title with a right-foot flick over Bruce Grobbelaar – virtually the last kick of the season.

And those of us working on the Liverpool Daily Post saw our 24-page “Liverpool Double Winners” special edition – all written and waiting for the final glorious chapter to be written – go straight in the bin. 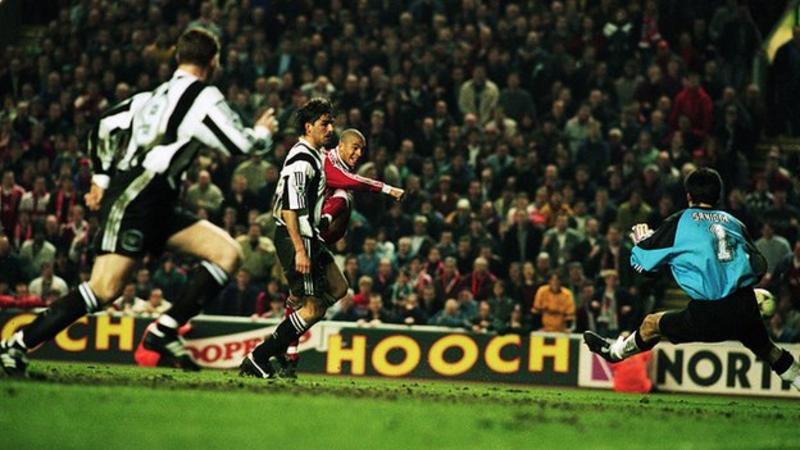 One of the great Premier League games in which the brilliance and flaws of Kevin Keegan’s superb Newcastle United side were laid bare.

Newcastle had conceded the Premier League leadership to Manchester United, having led by 12 points at one stage, but they still harboured title hopes while Liverpool had similar ambitions.

In a match of searing tension, brilliance, mistakes and a classic finale, Robbie Fowler put Liverpool ahead but Les Ferdinand and David Ginola gave Newcastle the lead.

Fowler restored parity again early in the second half before Tino Asprilla’s touch of class put Newcastle back in front.

Cue Stan Collymore. First with the equaliser, then with the late winner in front of The Kop. Keegan’s dug-out slump illustrated the damage done to Newcastle’s title tilt.

It was the summer football was “coming home” after 30 years of hurt, when Euro 96 hysteria gripped the nation.

England swept the Netherlands aside 4-1 in the group stage, before beating Spain on penalties in the quarter-final, setting up a last-four meeting with the old nemesis Germany.

Wembley was a cauldron of national fervour, as England’s perfect start from Alan Shearer’s header was levelled up by Stefan Kuntz’s quick equaliser, setting up the “Golden Goal” jeopardy of extra-time.

Kuntz had a header disallowed for offside while Paul Ince headed off the line from Marco Bode.

Darren Anderton hit a post before, most agonisingly of all, a second’s hesitation by Paul Gascoigne meant he ended up a fraction away from Shearer’s volleyed cross.

We all know how it ended. 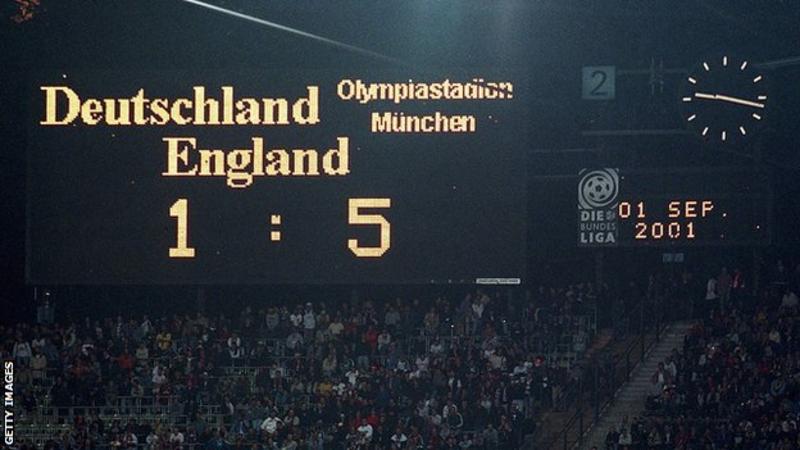 Munich’s Olympiastadion was the temple of German sport, where the 1972 Olympics had been staged and where West Germany had won the 1974 World Cup against the Netherlands.

Germany had closed the old Wembley with a 1-0 win in a World Cup qualifier in October 2000, prompting Kevin Keegan’s resignation – meaning Sven-Goran Eriksson was in charge when they met again.

England were underdogs as Germany had never lost such a qualifier on home soil but the mood around the camp was remarkably relaxed, although it dipped when Carsten Jancker put Germany ahead on six minutes.

Michael Owen quickly equalised and went on to grab a hat-trick as, his then Liverpool team-mates, Steven Gerrard and Emile Heskey were also on target in the rout.

Germany got over it to reach the World Cup Final in Yokohama the following year, losing to Brazil after they had beaten England in the quarter-final.

Five World Cup Finals covered and all producing a story of their own – from Ronaldo’s redemption with Brazil’s goals in their 2-0 triumph over Germany in Yokohama in 2002, to the coronation of Kylian Mbappe as the game’s new superstar when France beat Croatia 4-2 in Moscow 16 years later.

This 2006 World Cup Final brought the curtain down on the international career of a superstar, but France’s Zinedine Zidane left the stage in shame.

The two protagonists in the moment that scarred a stellar career had already made their mark in Berlin’s historic Olympiastadion.

It was 10 minutes from the end of extra time when Materazzi and Zidane exchanged words before the latter turned and headbutted the Italian in the chest.

Most of us inside the stadium were following the ball and only saw the full extent of Zidane’s attack on replay – the assistant referee informing Argentine referee Horacio Elizondo, who produced the red card.

Various versions of events were told about what was the catalyst, with Materazzi claiming he made remarks about Zidane’s sister, while Zidane himself said it was an insult aimed his mother, who was ill in hospital at the time.

Italy went on to win the World Cup on penalties – but the story of that final, outside of Italy, will always be Zidane’s France finale. 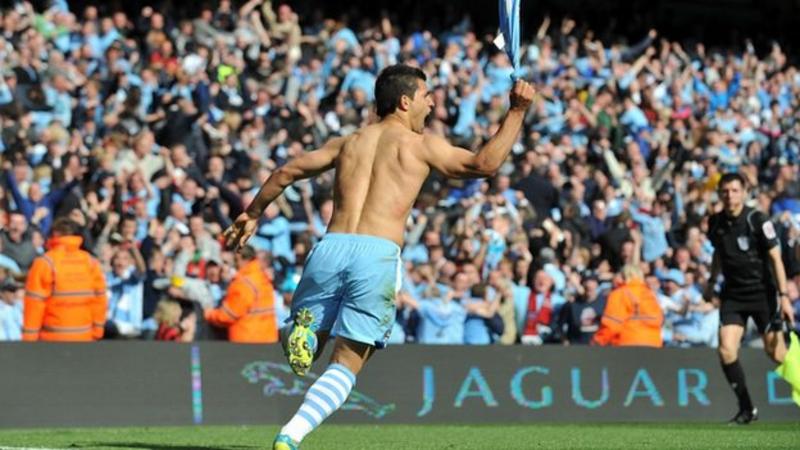 This even topped Michael Thomas’s title winner at Liverpool for late drama – arguably the greatest game of the Premier League era.

Man City needed victory over relegation-threatened QPR on the final day to edge out rivals Manchester United, who were away at Sunderland, on goal difference.

Pablo Zabaleta gave City a first-half lead but, in an atmosphere of near hysteria, QPR equalised through Djibril Cisse then, despite losing Joey Barton to a red card, went ahead through Jamie Mackie.

Manchester United were winning at Sunderland and winning the title as the board went up for five minutes of stoppage time.

Three minutes to win the title.

90+5 – Sergio Aguero takes Mario Balotelli’s pass, one touch with his right foot to make space, a second to drill a finish past Kenny and City were champions for the first time in 44 years.

Manchester United’s players and manager Sir Alex Ferguson, waiting on the pitch at The Stadium Of Light, were plunged into despair as ecstasy enveloped Etihad Stadium. 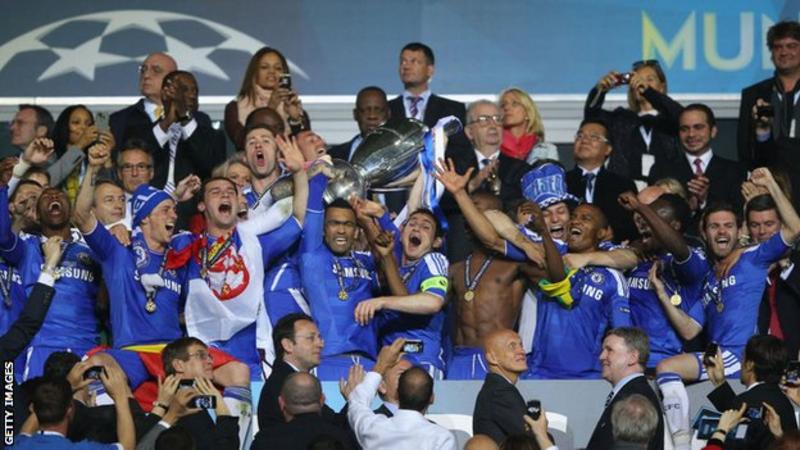 This was the night Chelsea claimed their Holy Grail in Bayern Munich’s own AllianzArena.

Chelsea owner Roman Abramovich had been in pursuit of the Champions League since buying the club in July 2003.

Chelsea, under interim manager Roberto Di Matteo, arrived in Munich after the drama of a semi-final win against Barcelona without suspended trio John Terry, Branislav Ivanovic and Raul Meireles.

Step forward Didier Drogba as he headed an 88th-minute equaliser.

The Chelsea striker, who was rescued by Petr Cech’s penalty save from Arjen Robben after he fouled Franck Ribery in extra time, then rolled in the winning spot-kick in the shootout, running the length of the pitch swirling his Chelsea shirt in the air.

And one more abiding memory – the fantastic sportsmanship of Bayern’s fans after losing the final in their own home. 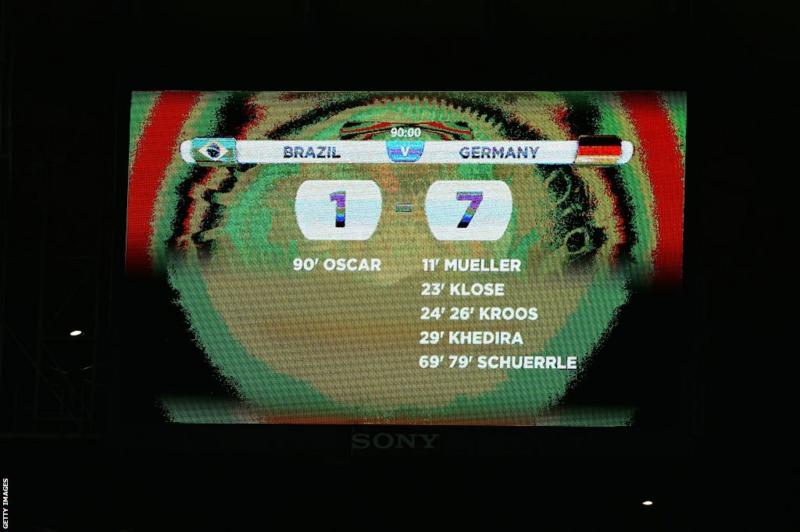 When I am asked about the game and occasion I would attend again if given the chance, this would be my pick.

Brazil’s 2014 World Cup was about redemption, cleansing their sporting soul from the wounds of the defeat inflicted on them by Uruguay in the final in their own iconic Maracana Stadium 64 years earlier.

We had been dispatched to Belo Horizonte, Brazil’s sixth largest city, for the semi-final against Germany in the Estadio Minerao. The areas around the stadium were packed hours before kick-off. It was fever pitch.

Brazil lost poster boy Neymar to injury against Colombia in the quarter-final and the whole nation was high on emotion and expectation.

It was all too raw for Brazil.

Ice-cool Germany were 5-0 up inside 29 minutes. Countless Brazil fans, young and old, were reduced to tears inside the stadium.

It was a night that will never be forgotten by anyone who witnessed it and I wrote about it in greater detail here.

Not the game but the occasion.

This was a spine-tingling day, the climax of one of the greatest stories British sport has ever known as the Foxes, 5,000-1 and relegation favourites before the start of the season (I tipped them to go down), won the title under their charismatic and popular manager Claudio Ranieri.

It was the day the trophy was presented amid scenes of pure theatre at The King Power Stadium.

Italian tenor Andrea Bocelli, blind since the age of 12, fulfilled a promise to Ranieri to perform at the stadium should Leicester City win the title. Even those of us who are fairly immune to the emotions surrounding a sporting event were choked at these wonderful moments before kick-off.

Bocelli was accompanied to the centre circle by Ranieri, who demanded, and was given, silence before a truly wonderful rendition of “Nessun Dorma”.

The formalities of the trophy presentation were completed after the game on a day that now has added poignancy after Leicester City owner Vichai Srivaddhanaprabha, who helped built that title side, was one of five people killed when his helicopter crashed outside The King Power Stadium on 27 October 2018. 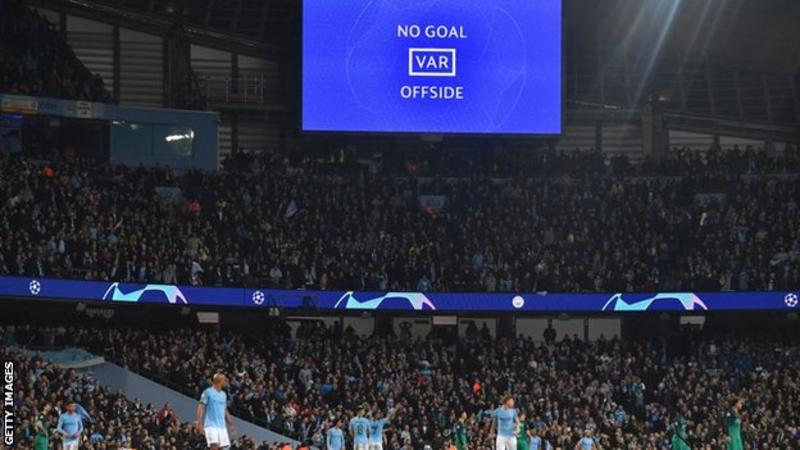 Spurs had a narrow 1-0 advantage from the first leg of this Champions League collision of Premier League superpowers.

No one could have predicted the scale of this drama.

Five goals inside the first 21 minutes reflected the chaotic brilliance that was reflected by the ever-changing mood inside Etihad Stadium.

Raheem Sterling first for City. Two from Son for Spurs. Bernardo Silva and Sterling again for City. 3-2 at half-time.

Aguero gave City a 4-2 lead before the hour only for substitute Fernando Llorente to bundle in another to give Spurs a foot in the semi-finals.

And then it all happened in stoppage time.

Sterling scored again. Etihad Stadium exploded in celebration and City manager Pep Guardiola ran down the touchline in jubilation. Spurs counterpart Mauricio Pochettino and his players slumped to the floor.

City were in the semi-final – or were they?

Aguero was in an offside position because of Bernardo Silva’s feather touch on Christian Eriksen’s pass.

Spurs were through again. Manchester City were out.

It was a night to scramble the senses on and off the pitch. A magnificent football match.