Photos show the utter chaos that ensues when 13,000 YouTube and TikTok obsessed fans cram into a convention center with their favorite influencers

Many of the top YouTubers, TikTokers, and influencers are recovering from Playlist Live right now.

The social media convention in Orlando, Florida had one of its biggest weekends yet from February 28 through March 1, when more than 13,000 attendees and hundreds of staffers gathered for panels, meet-and-greets, performances, and more.

The vast number of attendees made for a tricky WiFi and data situation throughout the weekend, to the point where WiFi completely crashed in multiple hotels – including the Marriott that Playlist was held in – on Sunday.

"I don't have service" was a refrain heard repeatedly throughout the halls, especially since Playlist Live presents a major opportunity to make viral content. Playlist, which used to focus primarily on YouTubers but fully embraced the short-form video platform TikTok this year, is similar to California's VidCon.

But Playlist has a reputation for having looser rules than VidCon, which has taken more steps to tighten security in recent years. In Orlando, both featured creators and popular but non-featured creators mingled with fans out in the open, which led to some massive mobs. And the premises were completely overrun by teens making TikToks. 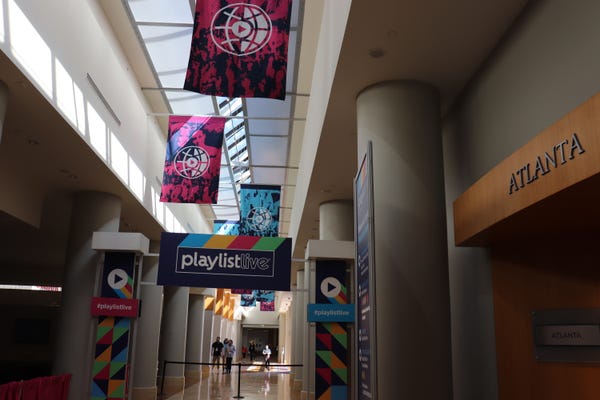 The convention kicked off Sunday morning with long registration lines that foretold a packed convention. 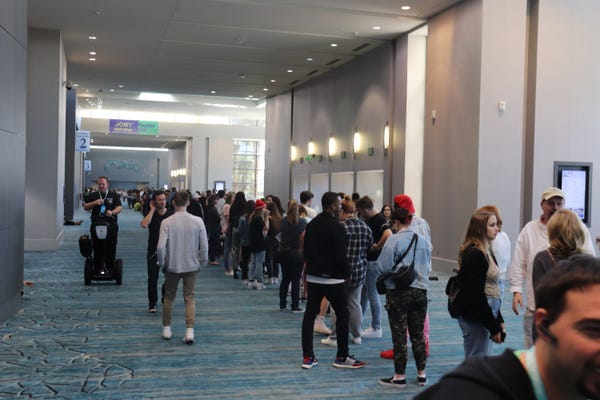 Some staffers rode Segways around, which was slightly reminiscent of the viral videos from TanaCon – although Playlist never devolved into chaos. 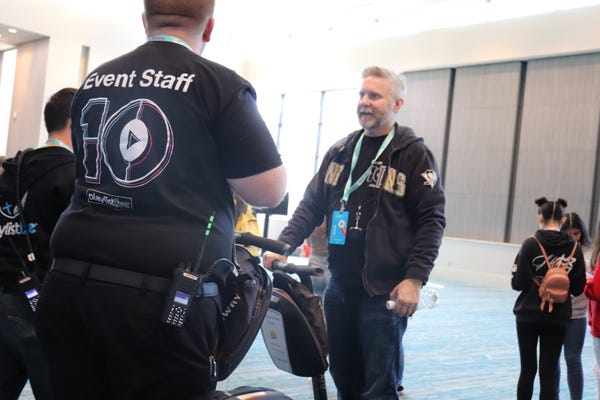 Viral videos from TanaCon showed Michael Weist riding around on his Segway.

Depending on what kind of ticket they purchased, some fans got to see beauty YouTuber James Charles right away at the first Friday panel. 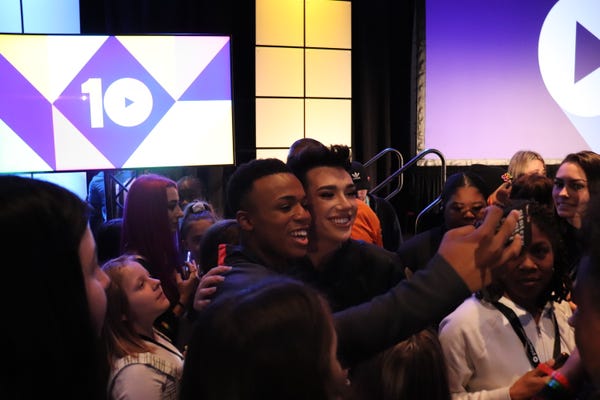 Fans could use their badges to get access to all the main events, which included performances from influencers who double as musicians, as well as food trucks. 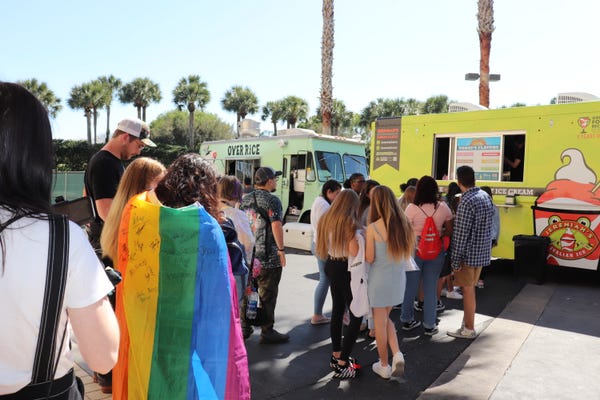 There was a lot of foot traffic around the most heavily guarded part of the Marriott, the creator lounges, where influencers got private access to brands, open bars, and each other. 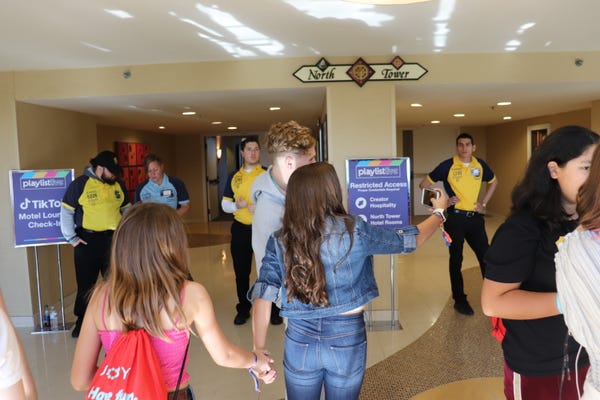 But some influencers, like 18-year-old TikTok star Zoe Laverne (below), visited the crowd waiting outside the creator lounge to take pictures and videos. 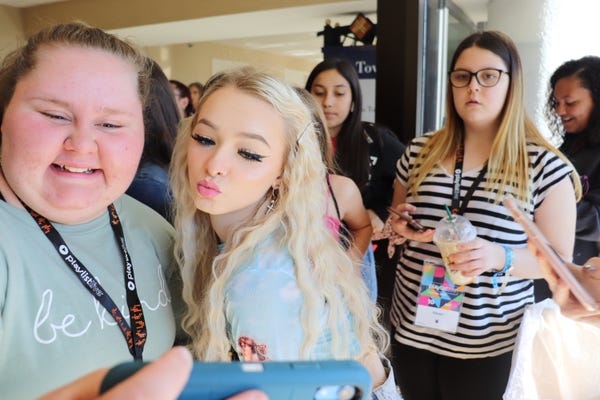 Playlist staffers urged convention-goers to stay inside the lines taped to the floor (VidCon uses barricades), but some fans were able to get away with spontaneous meet-ups with their favorite internet stars. 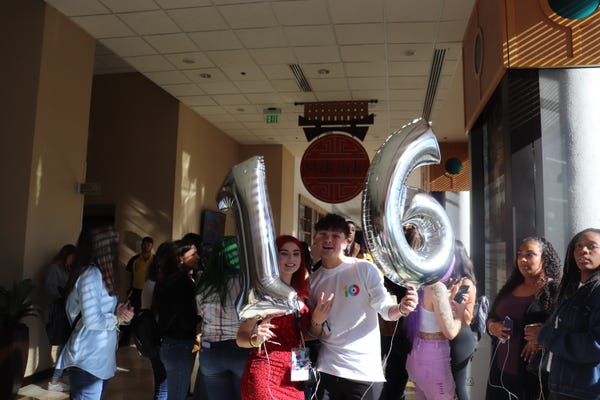 Once past the human barricade to the creator lounge, there's a pseudo-hidden speakeasy where Playlist's guests of honor could get free mimosas throughout the day. 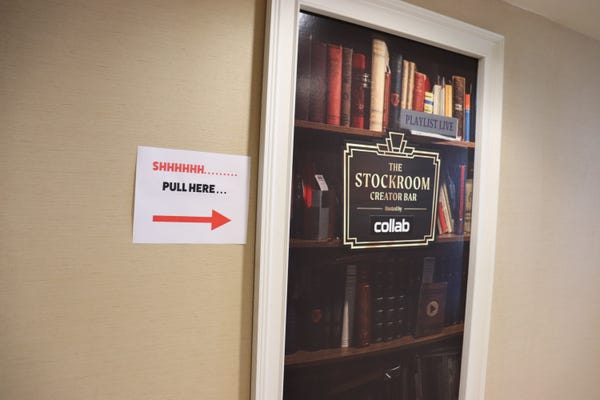 There was also a "TikTok Motel," one of the convention's many efforts to be inclusive to the new generation of TikTok stars. 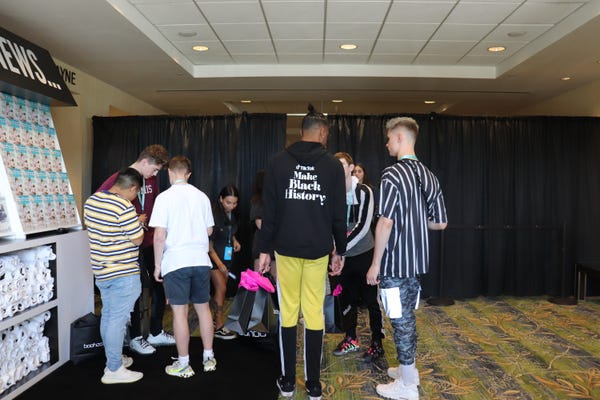 The more secluded hallways that were kept private for creators gave them opportunities to mingle and make content without fans interrupting. 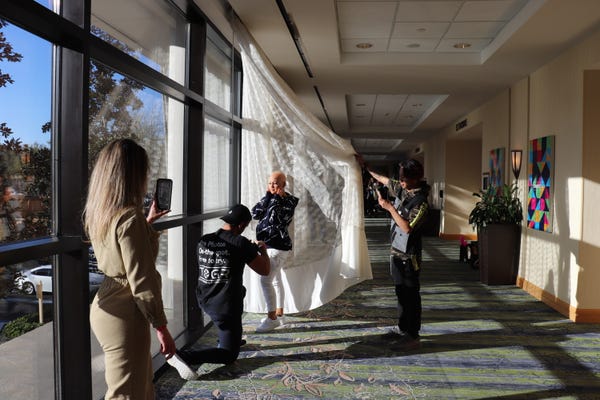 One of the convention's many sponsors, boohoo, also set up a faux shop for influencers to bag free clothing items. 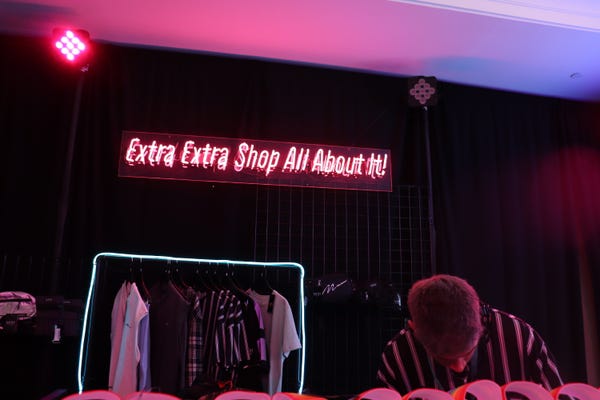 The swimsuit and clothing retailer also sponsored one of the convention's ultra-exclusive after parties, which took place at a waterpark 30 minutes away by bus. 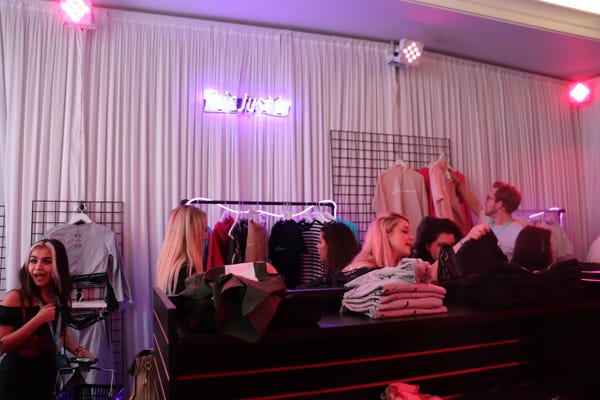 In the Marriott lobby, fans could purchase their own Playlist merchandise to take home. 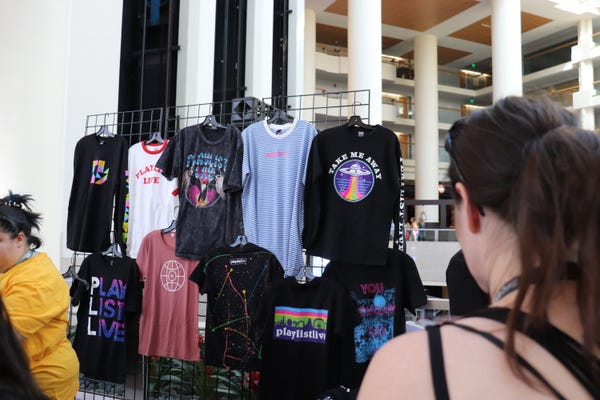 And down the hall in the main stage room, hundreds of people gathered to watch Q&As and challenge segments with famous YouTubers and TikTokers. 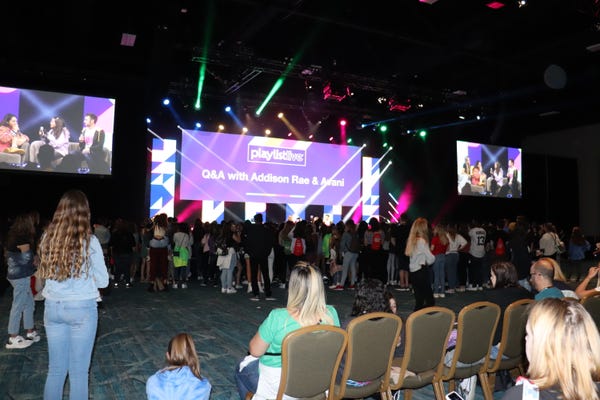 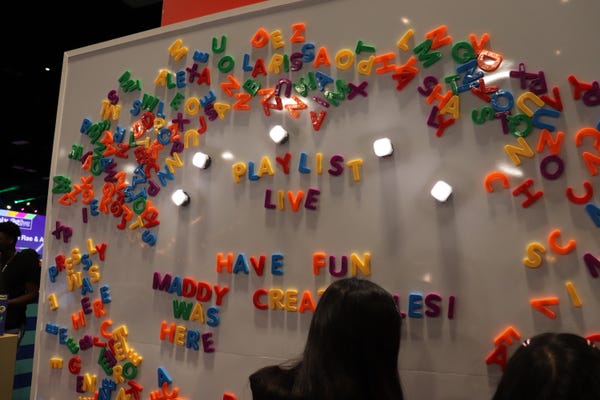 Normal hotel guests were staying at the Marriott too, but plenty of signs showed there was a social media convention going on, like lost scrunchies discarded around the restrooms. 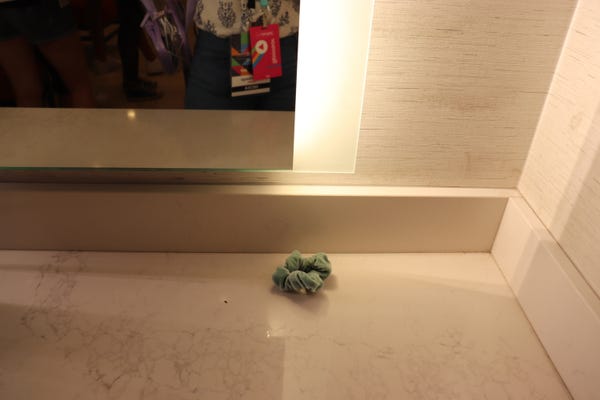 There was also a fair amount of chaos, like when 17-year-old TikTok megastar Chase Hudson came down to the Marriott lobby's Starbucks on Saturday. Fans of Hudson, who goes by "lilhuddy" online and is part of the collaborative Hype House friend group on TikTok, swarmed the influencer in the Starbucks. 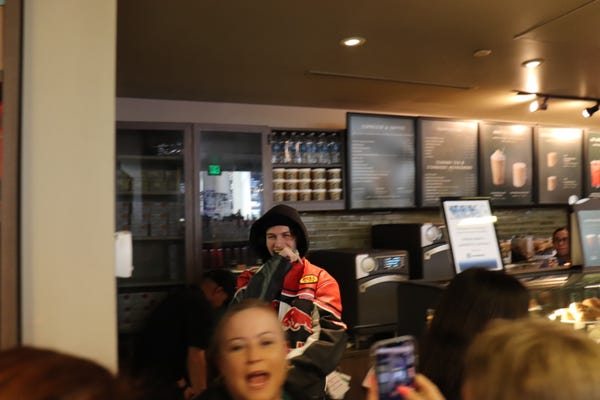 To escape the mob, Hudson jumped over the counter and was escorted out by Starbucks workers and security guards.

Afterward, security around the Starbucks tightened, and security guards patrolled both its entrances and the surrounding area all weekend. 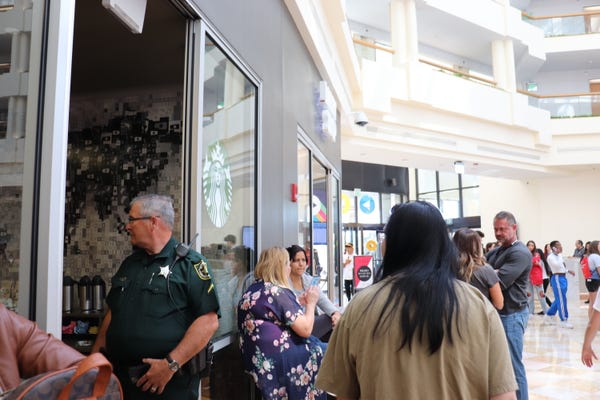 Attendees were still able to act like teenagers though, like when someone tossed toilet paper around the decorative awnings surrounding the hotel pool. 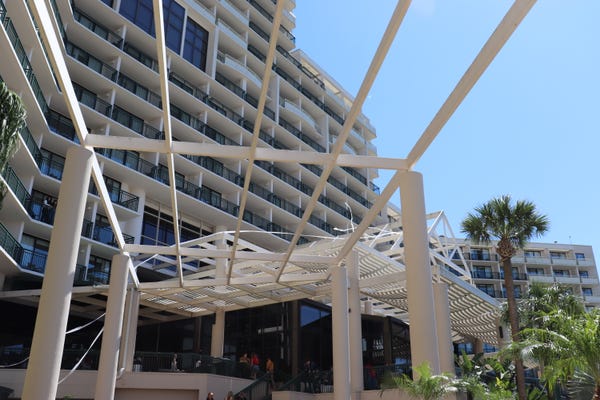 The pool was set up as part of the convention, and while plenty of fans took pictures and made TikToks around it, the mid-60s weather in Orlando was too chilly to swim. 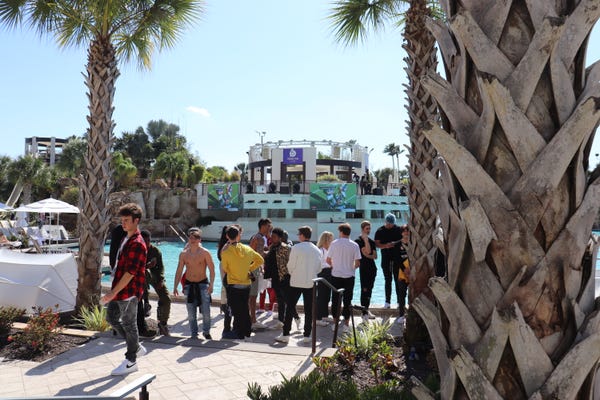 Inside, another mob swarmed around 20-year-old James Charles when he made a spontaneous lobby appearance to toss out free copies of his eyeshadow palette collaboration with Morphe Cosmetics. More than a hundred people gathered pushing and screaming around Charles, who was flanked by security guards, and crowds even gathered on the balconies above. 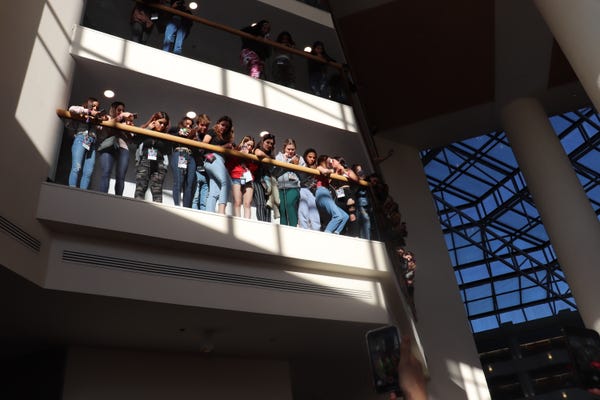 One lucky fan was able to catch one of Charles' palettes, but the crowd pushed her to the floor in the process. 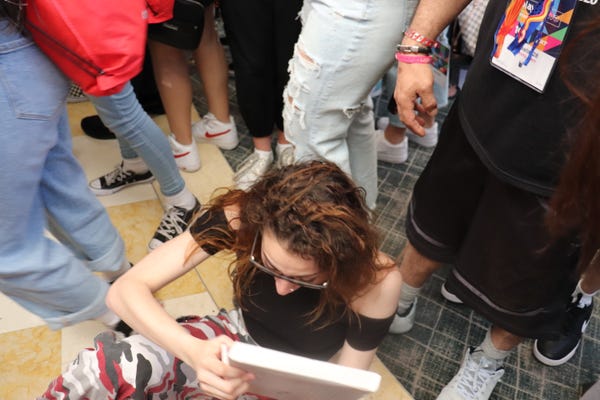 That being said, like most Playlist attendees, she was thrilled to share a special moment with one of her favorite creators (and she got a free palette out of it, too). 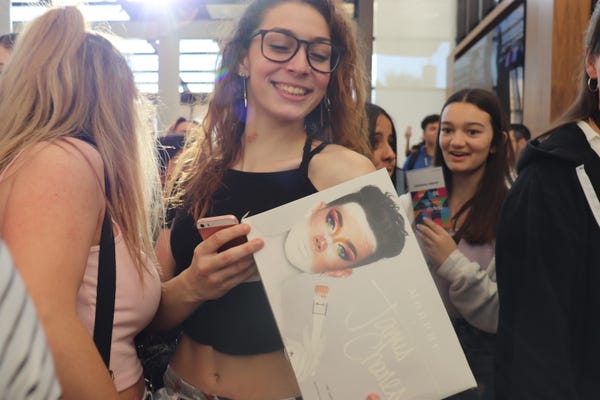