A probe was launched after TikTok footage emerged of players and others allegedly singing ‘f*** the Pope’ inside a function suite after lifting the SPL title at Ibrox on Saturday.

‘We are aware of a video circulating on social media apparently showing Rangers players using sectarian language while celebrating on Saturday,’ a Police Scotland statement read. 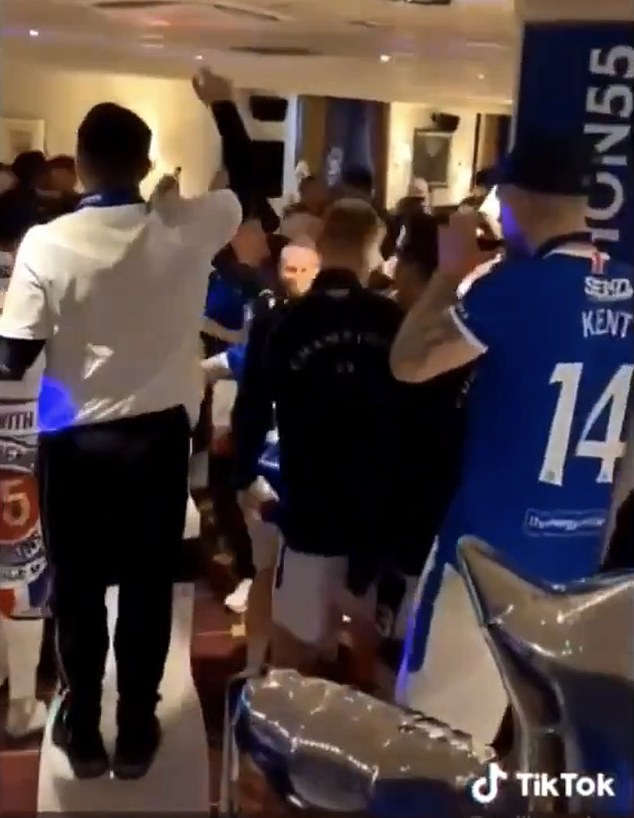 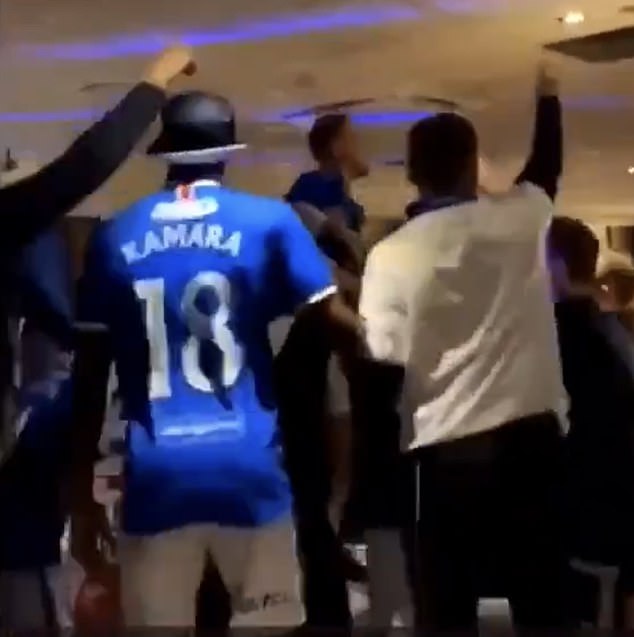 ‘We are assessing its contents and will liaise with the Crown Office and Procurator Fiscal Service as part of our enquiries.’

Rangers released a club statement insisting no criminality took place and that the video that has been shared is an attempt to discredit their players.

The statement read: ‘We are aware of a video circulating on social media. It is evident that this video was shared with an adjoining narrative which attempts to discredit our players and the reputation of Rangers Football Club. This highlights the dangers of “trial by social media.”

‘Our squad is richly diverse. Sectarianism is unacceptable and has no place in our club which is underlined by our Everyone Anyone campaign.

‘We are confident that no criminality took place, we have sought legal advice and look forward to cooperating with Police Scotland.’ 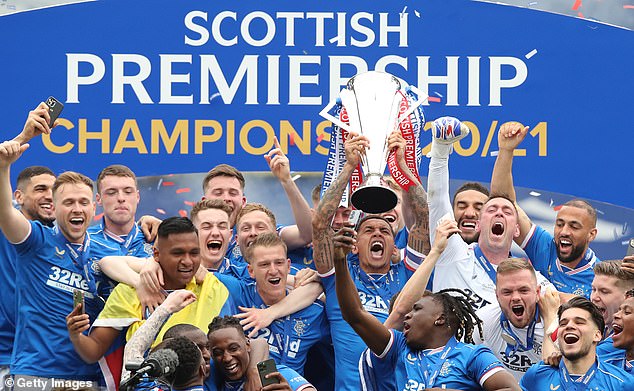 Rangers and Scottish football authorities had earlier criticised the behaviour of fans in Glasgow on Saturday after police in riot gear broke up celebrations in George Square hours after the team lifted the Scottish Premiership trophy following their final game against Aberdeen.

Five police officers were injured and 28 arrests made – with the force promising many more will follow – after ugly scenes accompanied a mass gathering which flouted Covid-19 rules a day after Glasgow was given notice of further restrictions.

Footage emerged of fans fighting with each other and missiles being launched at police as they dispersed the gathering of an estimated 15,000 people.

Rangers condemned the scenes after describing the support from ‘millions of our fans across the world’ as ‘incredible’.

A club statement added: ‘We are grateful to Scottish Government officials, Glasgow City Council and Police Scotland for the constructive engagement in the lead up to the weekend’s game.

‘We worked closely with the authorities for two weeks before Saturday’s match to ensure a consistency of message.

‘Sadly, a small minority of people behaved inappropriately and in a manner not reflective of our support.

‘Some of the scenes were unacceptable and have besmirched the good name of Rangers Football Club. These so-called ‘fans’ should reflect upon the values and ethos of our club, and consider the damage this does to the reputation of the club.

‘We will continue to engage with authorities as required.’ 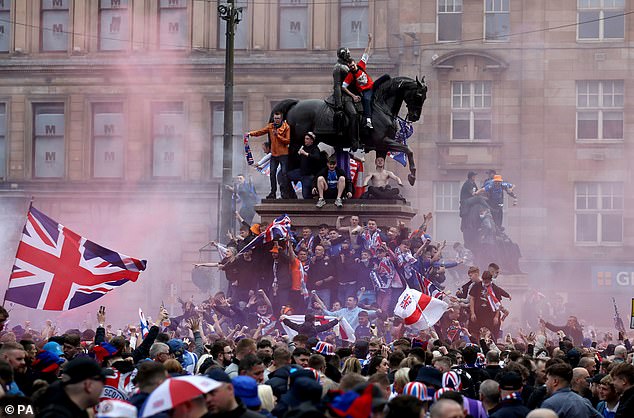 ‘Scenes that require the First Minister, Justice Secretary, Police Scotland and the Scottish Police Federation to issue condemnatory statements, and images that dominated the news agenda throughout the weekend, represent an abomination not a celebration,’ Petrie added.

‘Those responsible for sectarian singing, for vandalism and for inflicting physical damage may attach themselves to football but cannot be considered football fans.

‘Events on Saturday at George Square served only to depict our game in the poorest light and we condemn the behaviour in the strongest terms.

‘We empathise with fans who have been deprived of attending matches throughout this pandemic. That, however, does not excuse the behaviour of those who brought chaos to the streets in the name of football this weekend.’

The Scottish Professional Football League described behaviour of fans outside Ibrox and in the city centre as ‘utterly shameful’.

A spokesperson added: ‘As the club themselves have said, this behaviour was unacceptable, and especially so given the repeated advance warnings regarding social distancing.

‘At a time when everyone in the game is working hard to enable long-suffering fans to get back into stadia, it is simply the last thi~# members of the public did not deserve to be caught up in this melee. We fully support the actions of the courts, the SFA and the club in dealing severely with those who have so badly let the game down.’

‘There was absolutely no need for them to gather, absolutely no need whatsoever, and the warnings were given very clearly… and then some of them went on to behave in a loutish and thuggish fashion in George Square – devastating property, circulating and expressing vile anti-Catholic bigotry in the centre of the city of Glasgow,’ he told BBC Radio Scotland’s Good Morning Scotland.

‘Police officers were assaulted on Saturday, which is completely unacceptable, and obviously that will be a matter which is pursued vigorously by Police Scotland, and so it should be, and there’ll be various actions taken to address the behaviour and the conduct of the fans on Saturday.’