A restaurant owner has penned a furious response to a negative online review from a customer who claimed about her large family group being turned away before England’s lockdown 2.0 began.

The owner of West Coast Rock Cafe in Blackpool has dubbed a TripAdvisor reviewer ‘very self obsessed’, after spotting her negative review on the travel platform.

Posting under the name Debbie W from Goole, the reviewer gave the family-owned restaurant a one star rating, claiming her party of eight, consisting of two adults and six children, had been turned away in October, despite her insistence that her three older children could sit at a separate table.

It’s not clear at what point of the month the family visited but in mid-October, Blackpool entered Tier 3, which prevented households mixing indoors and outdoor socialising in a group of more than six.

There was an exception to the rule for households with more than six people, and Debbie claimed she hadn’t experienced any similar problems at other restaurants.

Her critique, however, was met with a stinging response from the owner, who wrote: ‘If there are more than six of you it is probably best to check before turning up.

‘Common courtesy I would think in these difficult times for businesses. There are a some very self-obsessed people about that’s for sure.’ 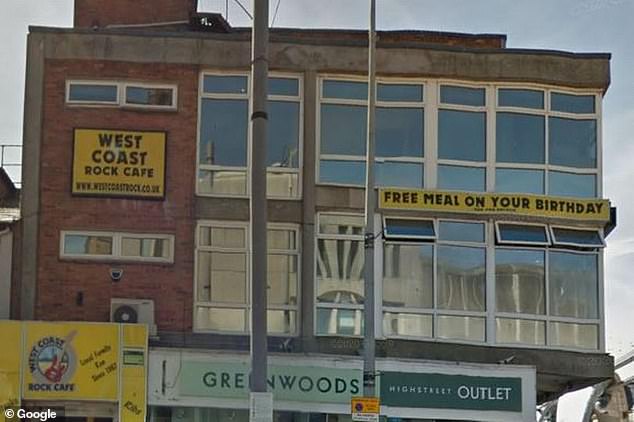 Posting under the name Debbie W, the reviewer accused the eatery of refusing to accommodate a family of eight people

Venting frustrations, Debbie wrote: ‘Refused to seat a family of two adults and six children despite the fact we said that three older kids could sit alone.

‘Spoke to manager who was extremely unhelpful. Not had this issue with any other place.

‘Turning a very large order down there especially at these times and for no reason. Management is very poor! I hope they own it!’

Debbie’s profile shows that she has previously rated just four other restaurants ‘terrible’ and has labeled eight ‘poor’ out of 70 contributions on the site.

Disagreeing with her scathing review, the eatery owner hit back with a critique of their own.

Rated overall 4.5 out of 5 stars and with 1,973 reviews, West Coast Rock Cafe in Blackpool is listed on TripAdvisor as 25 of 452 restaurants in Blackpool.

Having been established in 1987, the family run restaurant restaurants offers their customers dishes including burgers and fajitas.

Posting about the eatery on its website, a description reads: ‘Good for all occasions. Families welcome, kids play area, great for big groups. Date nights, anniversaries.