RICHARD LITTLEJOHN: If coronavirus results in the collapse of more airline companies, the solution will be easy – we can just let a wind-powered train take the strain…

Coronavirus is being blamed for the collapse of Flybe, despite the fact that the airline has been in trouble for years.

The 2,000 staff who find themselves out of work are rightly furious. One raged: ‘Is coronavirus the new go-to excuse after Brexit?’

Flybe may be the first failing company to use the pandemic as a convenient smokescreen to cut its losses. But it won’t be the last. Over the coming weeks and months, others will follow suit, some with real justification, some without.

Covid-19 will simply provide the cover for downsizing decisions which would, sooner or later, have been taken anyway. 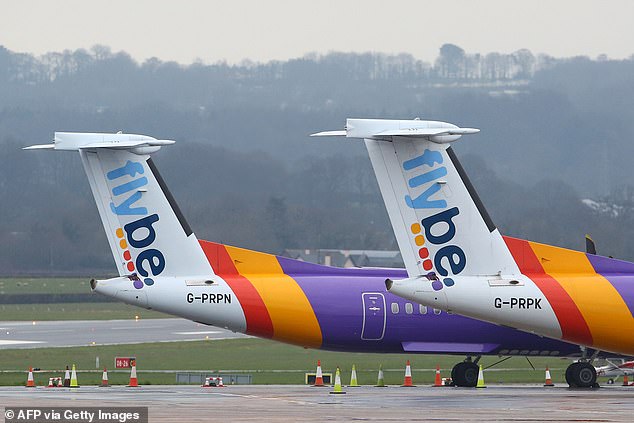 Coronavirus is being blamed for the collapse of Flybe, despite the fact that the airline has been in trouble for years, writes RICHARD LITTLEJOHN (stock image)

That’s not to deny that the panic poses a genuine threat, especially to the travel industry.

Airlines are scrapping services and slashing fares drastically to mitigate the financial damage inflicted by passengers who are too frightened to fly.

Those planes which haven’t been grounded are eerily empty, condemned to roam the globe like the Mary Celeste.

Had I known this a couple of weeks ago, I wouldn’t already have booked a trip to visit my mum in Michigan. If I’d left it a while, I could have saved a fortune. That’s always assuming, of course, that Virgin Atlantic hasn’t gone out of business by then.

If this crisis is prolonged, there’s a very real danger other airlines will follow Flybe to the knacker’s yard.

Covid-19 has done more damage to the airline industry in a few days than Extinction Rebellion could hope to manage in a month of Sundays.

At this rate, we won’t need a new runway at Heathrow. And we’ll have to convert Terminal Four into an isolation hospital-cum-morgue.

We could be on the brink of a major realignment in the way we get around in future.

Air travel is under constant siege from the ‘climate emergency’ hysteria as it is. Ditto petrol, diesel and hybrid cars. 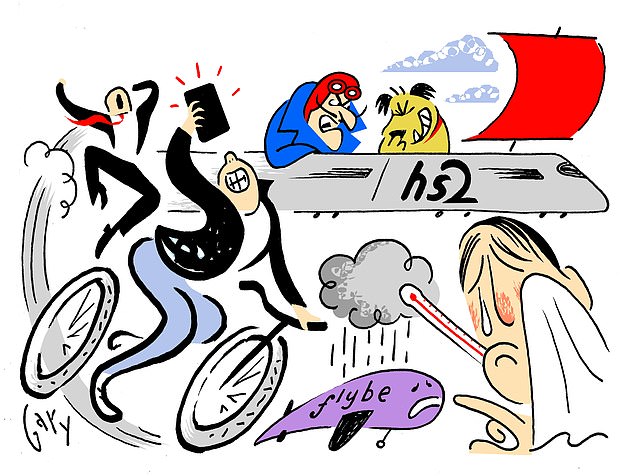 Air travel is under constant siege from the ‘climate emergency’ hysteria as it is. Ditto petrol, diesel and hybrid cars, writes RICHARD LITTLEJOHN

There’s no immediate prospect of electric vehicles taking up the slack, even if the Government carpets our green and pleasant with bird-shredding War Of The Worlds wind turbines.

In any event, city centres are being re-engineered to provide a hostile environment for cars, including electric.

Cycling isn’t the answer. Bikes may be OK for short journeys, but who in their right mind is going to cycle from Glasgow to London?

With foreign travel out of the question, would you fancy taking the family to staycation in Morecambe on an elongated ‘trandem’, like the one used by The Goodies? Mind you, that won’t stop some Green headbanger proposing to turn the M1 into a cycle lane. Incidentally, I discovered a new drawback to cycle lanes this week, quite apart from the poisonous greenhouse gases pumped out by cars, buses, lorries and taxis caught up in the resultant gridlock. Crossing the road in Central London, I was almost mown down by a maniac on a mountain bike. 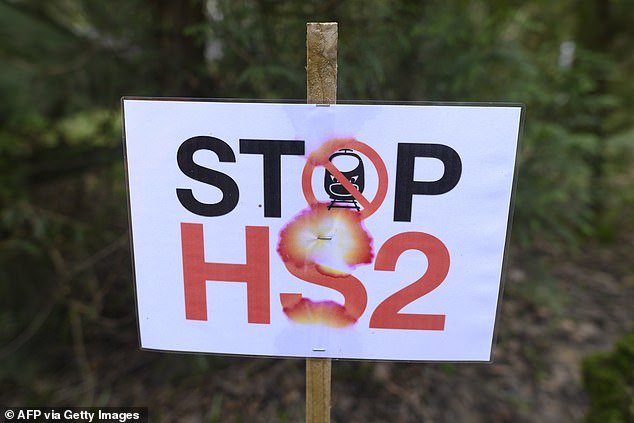 On the railways, HS2 has been given the go-ahead, but there’s no guarantee that, if and when it finally opens, Britain will have enough generating capacity to power the trains, writes RICHARD LITTLEJOHN. Pictured: An anti-HS2 placard in South Cubbington Wood, Leamington Spa

He then mounted the pavement and grabbed a mobile phone out of the hand of a pedestrian making a call outside a pub, before escaping at breakneck speed. Mayor Sadiq Khan may think he’s saving the planet by building dedicated bike lanes everywhere. But all he’s done is provide mounted muggers with a fast getaway.

The only good news is that the surface of an iPhone is said to contain 20 times as much bacteria as a toilet seat. So, with any luck, that mugger will contract coronavirus and die a horrible death, screaming and kicking in agony.

Meanwhile, on the railways, HS2 has been given the go-ahead, but there’s no guarantee that, if and when it finally opens, Britain will have enough generating capacity to power the trains.

So I was intrigued on reading The Times yesterday to see a picture of a train powered by a giant red sail.

Phil Mathison, his wife Mary, and friend Torkel Larsen have rebuilt the Spurn landship, which between the wars took trippers along a peninsula east of Hull, at speeds of up to 40mph.

They are pictured sitting proudly on this magnificent machine wearing red boiler suits, hi-viz jackets and flying goggles, like Dastardly and Muttley off Wacky Races.

Unfortunately, the Midland Railway in Derbyshire — where the intrepid trio completed the project — is considerably more sheltered than the gale-lashed North Sea coast and they have so far failed to get the landship above 6mph.

Still, with regional airlines like Flybe going broke and car journeys being legislated out of existence, soon the railways will be the only way to travel any distance.

As the Government has clearly decided that wind power is the future, perhaps the Spurn landship technology could be adapted for HS2.

It would be clean, green and at a steady 6mph would only take 20 hours to get from London to Birmingham — provided the wind blows, of course.

Should HS2 fail to attract enough passengers and go belly-up, they can always blame it on coronavirus.

And if that handy excuse doesn’t wash any more by then, don’t panic. There’ll be another one along in a minute.

With wild predictions of up to 500,000 coronavirus deaths in Britain, town halls are being charged with disposing of the bodies. How long before they work out a way of fining you for putting out the wrong kind of corpse in the wrong container on the wrong day?

A woman told an industrial tribunal this week that she was forced out of her job because she didn’t want to join in with men talking about football. Hang on a minute. Since when has that been grounds for an unfair dismissal claim? Women playing and talking about football is pretty much compulsory these days. There’s no escape on the BBC or Sky from women’s football, or women presenters and pundits on football shows. Equality cuts both ways. Any male employee in a predominantly female workplace who wanted a pay-off because his women colleagues wouldn’t shut up about frocks, hairdos and Love Island would be laughed out of court.

Feeling Chirpy in my hazmat suit

Things are moving so fast, it’s difficult to keep up with the latest developments.

On Tuesday, I suggested that it would only be a matter of time before people started wearing gas masks on public transport.

Hey, presto! The next day a man turned up at Milton Keynes railway station doing just that.

Since then we’ve seen all manner of makeshift protective headgear, including a woman wearing a plastic food container on a bus. She looked like Lord Buckethead, from the Monster Raving Loony Party. 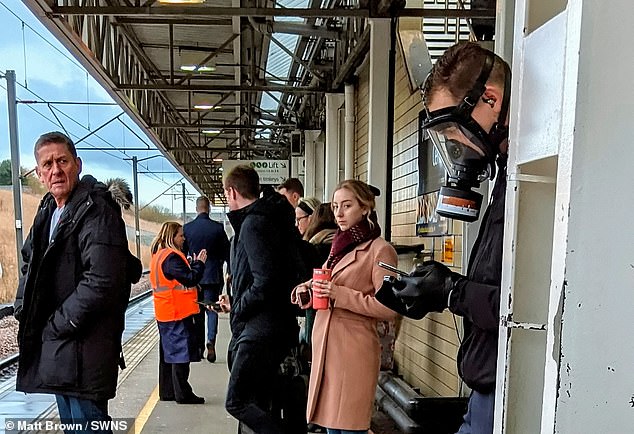 On Tuesday, I suggested that it would only be a matter of time before people started wearing gas masks on public transport. Hey, presto! The next day a man turned up at Milton Keynes railway station doing just that, writes RICHARD LITTLEJOHN

I also mentioned that another columnist had written that her husband had stockpiled 100 toilet rolls. By yesterday, supermarket shelves had been stripped of Charmin and Andrex soft quilted.

In Australia and Singapore, people have been panic buying condoms to wear on their fingers when they press lift buttons.

How long before that catches on here and Durex supplies are exhausted? Stand by for a coronavirus baby boom in nine months’ time.

Still, I may mock, but as I conceded on Tuesday there’s obviously something to worry about. Given that I was going to what we used to call White Hart Lane on Wednesday night, I thought I’d better take precautions before I mingled with 60,000 potential coronavirus super-spreaders.

My Hurt Locker suit is at the dry cleaners and Millets had sold out of Army surplus gas masks. So I had to improvise.

I hope this outfit did the trick.

Mind you, after seeing Spurs lose at home for the second time in four days, I can’t help thinking I’d have been better off self-isolating.

Spitting Image peaked on the night of the 1987 General Election, with the fabulous ‘Tomorrow Belongs To Me’ sketch marking Mrs Thatcher’s third victory.

It’s a mistake reviving the show, 24 years after it was laid to rest. The world of satire has moved on. Some might say vanished completely, certainly on television. How do you parody Boris, or Donald Trump? While it’s a fun idea to imagine the Greta child as a weathergirl, once you’ve seen her forecasting scattered showers of fire and brimstone, there’s nowhere else to go. A more inspired move would be to bring back Rory Bremner.

Yes, he could be right-on at times, but his impressions are always peerless, his scripts grown up and, more importantly, genuinely funny.

It’s a mystery why he can’t seem to get arrested, especially when all those supposedly edgy, yet utterly predictable, Left-wing ‘comedy’ panel shows on TV are about as funny as Covid-19. 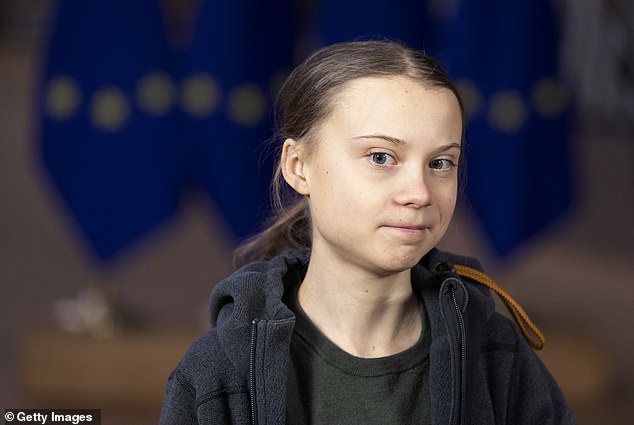 While it’s a fun idea to imagine the Greta child as a weathergirl, once you’ve seen her forecasting scattered showers of fire and brimstone, there’s nowhere else to go, writes RICHARD LITTLEJOHN