“I have four metal plates and 31 screws holding my face together. I’m now near blind in one eye and I know that vision will never come back.”

On 3 November 2019, Sam Ward had scored twice and was hovering in hope of a hat-trick against Malaysia in Great Britain’s Olympic hockey qualifier when a team-mate took a shot and the ball – travelling at around 50mph – hit him directly in his left eye.

The impact shattered the forward’s eye socket, caused seven facial fractures and tore his retina, leaving him effectively blind in one eye.

For months afterwards, just hearing the sound of a hockey ball being struck would trigger “painful” flashbacks for Ward, who has scored 72 international goals in 126 caps for Great Britain and England.

And the Rio Olympian still experiences “night terrors” in his sleep in which people try to attack his ‘good’ eye.

The 29-year-old thought his career was over, but last month he made an incredible return to the sport and capped his domestic comeback with a dramatic late equaliser for his team Old Georgians.

“I wouldn’t wish what I’ve been through on anyone, but to score after everything was probably the greatest moment of my life,” he told BBC Sport.

Ward now hopes to convince Tokyo 2020 selectors that he can still compete at an Olympic level despite his “devastating” visual impairment.

‘They literally took my face off during surgery’ 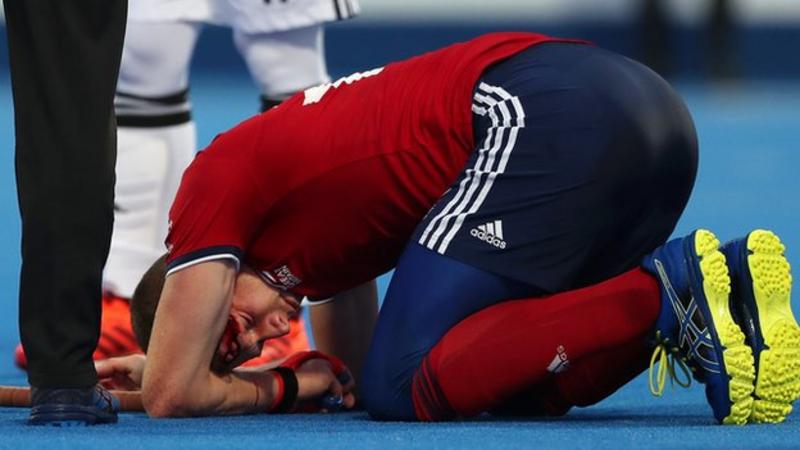 Although he was floored by the blow, Ward was adamant he should return to the field of play and help GB qualify for the Olympics.

Team officials insisted his game was over and after glancing in the window he understood why.

“I couldn’t see out of my left eye, it was swollen, bleeding and then I realised I had no real facial structure down that side of my face,” he said.

“The roof of my mouth also felt like it was moving up and down, which was because the bone in my face was fractured, and that’s when the pain hit.

“It was like severe, aggressive pins and needles in my face, and absolute agony.”

Because of the extent of the injury and facial swelling it was 10 days before extensive corrective surgery could begin.

“They basically took my face off,” said Ward with a nervous smile.

“They cut me from ear to ear across the top of my head, peeled back my face and put four plates and 31 screws inside my face, then stapled me back together.

“The pictures look gruesome, but they did an incredible job.”

‘Surgery was a success – but I couldn’t see’

Eleven days later Ward went for a check-up and although the medical team were happy with his recovery, Ward had an issue.

“The surgeon went ‘yeah you’re done, great’ and I was like ‘erm, but I still can’t see’, which they weren’t expecting.”

A specialist in London later delivered the “devastating” news he had irreparable retina damage.

“That was a tough day,” reflects Ward. “I broke down on the phone to my dad and couldn’t tell my mum.

“Hockey had been my life and at that point I couldn’t see a future for me in the sport.”

Over the following weeks some of his physical wounds began to heal, but the psychological scars took longer to fade.

“I’ve always been a worrier and had problems with anxiety, but to begin with the sound of a hockey ball being hit was horrendous and caused flashbacks,” he revealed.

“I actually had a lot of ‘night terrors’, which are basically really bad nightmares where people tried to shoot at my good eye with darts.

“I’ve worked a lot with psychologists and understand it’s concern about protecting my right eye and part of the grieving process.”

‘I didn’t want to be a car salesman again’

He retains some peripheral vision in his left eye, but sees nothing other than a “large grey blob” centrally.

A hockey comeback carried obvious risks and challenges, but after deciding a return to his previous career as a car salesman did not appeal he reached out to England Hockey.

“My left eye is what it is, but I play in glasses or a mask now because my right eye is the world and I have to do everything to protect it,” stated Ward, who used ‘secret’ brain-training apps to aid recovery before his first game back on 22 February.

“I’ve never been more nervous for a game of hockey in my entire life,” said the forward. “It was five times worse than my international debut.”

With five minutes remaining Old Georgians were trailing high-flying Surbiton 3-2 when they won a penalty corner.

“It was almost written for me and I just knew I’d score,” said the Commonwealth bronze medallist.

“There’s never been a moment quite like it in my career and even though crowds can be hostile in hockey it felt like everyone was supporting me.”

Ward shared an emotional embrace with his father immediately after the game and is “proud” of his return, but has set himself even bigger targets.

‘Reaching the Olympics would be a dream’

He hopes to return to the international stage in time for Tokyo 2020.

“I don’t think there’s anything in the world that would mean more to me, it’d be incredible,” says Ward.

“I’m better than I thought I’d be coming back, but it’s a long way to go from club hockey to the international game and I have to keep working to be the best version of me now.”

If you are feeling emotionally distressed and would like details of organisations which offer advice and support, visit the BBC Action Line.