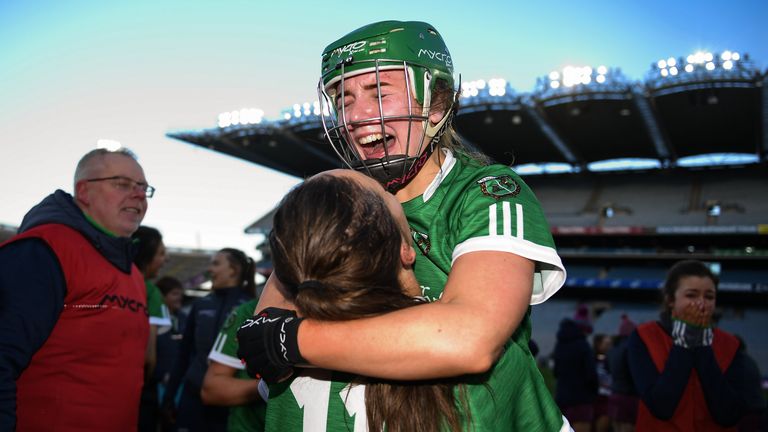 Sarsfields joined the illustrious roll of honour for the AIB All-Ireland Senior Club Camogie Championship, by ending the phenomenal history-making run of Slaughtneil by winning a 1-8 to 0-10 battle at Croke Park.

Having finished second best when their great rivals annexed the first two of their titles, Sarsfields were not short of motivation but neither were the Robert Emmet’s crew either, given their four-in-a-row aspirations.

This was trench warfare, and it was no surprise the three-in-a-row champions were carried out on their shields.

Having been outperformed in the first half, Damien McEldowney’s unit rallied to such an extent they hit the front with an outrageous pointed free from right on midfield by Louise Dorgan with 10 seconds of normal time remaining.

The Derry girls have developed a wonderful habit of seeing out tight games of this nature over the years but on this occasion, they were unable to hold firm and were behind within 30 seconds of hitting the front.

It was the outstanding Orlaith McGrath who played the role of provider for her younger sister Siobhan in the first minute of injury time.

The teenager had been switched to the half-forward line by her father, Sarsfields manager Michael ‘Hopper’ McGrath, in response to Slaughtneil’s total dominance after the restart and did manage to exert some influence.

When Orlaith gathered possession, Siobhan ventured forward to provide the option for the offload, and then the clinical finish, after some tight close control. Suddenly the Galwegians were two points ahead.

Therese Mallon halved that deficit in the third minute of injury time after a classy run and astute pass by Tina Bradley, but Slaughtneil could not create the one last chance to rescue themselves and the four-in-a-row dream was over. They will bemoan their inability to impose themselves in the opening period, although Sarsfields deserve considerable credit for that, with Aoibhe Deeley tagging Bradley and Maria Cooney enjoying the run of Jones’ Road in front of her full-back line.

That ensured a flow of traffic the other way, and the two McGraths flourished, with Orlaith especially, a constant menace, though Siobhan regularly had the alarm bells ringing too.

The Gaeilgoiri will also consider three chances of goals, where they opted to take points, with Bradley twice and Shannon Graham clearing the crossbar when an opportunity to shake the rigging looked to present itself.

There was nothing in it in the opening gambits and the teams split four points, via frees from Dorgan and Siobhan McGrath, and scores from play by Bradley, from a central position on the 20, and Orlaith McGrath.

Sarsfields turned the screw from there though, with Cooney dominant at one end and the McGraths likewise at the other, while the workrate of the entire forward unit without the ball was particularly noteworthy. 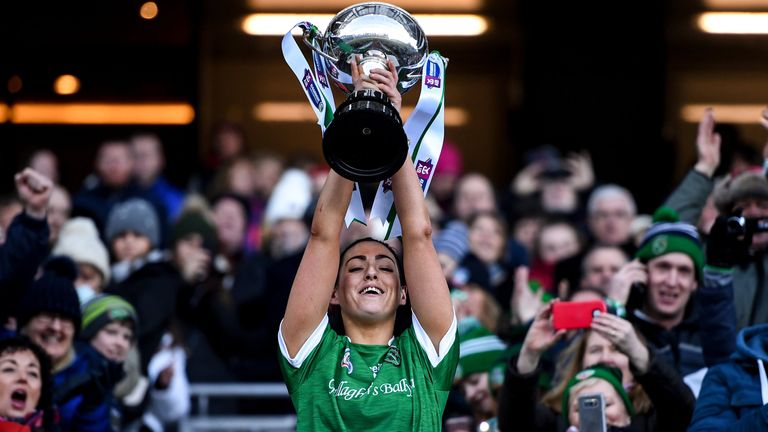 Orlaith fed Siobhan for a neat score and then Siobhan landed a stupendous point from the left. They added another point each in response to a Bradley free and it was 0-6 to 0-3 at the change of ends.

Slaughtneil were a completely different force in the second half, as was to be expected from one of the most dominant outfits in the history of the competition.

Graham took her point after getting free for the first time, again with a goal on, and almost straight afterwards, Bradley slotted over although Josie McMullan was in splendid isolation inside, Laura Ward having been forced to move towards the centre-forward.

Still, there was momentum and having been outworked in the first half, they were back to their fever-pitch best after the resumption, a couple of blocks by Ceat McEldowney and Dougan in the space of 10 seconds illustrating that well.

Points from Tina and Siobhán Bradley, the latter after good work from Aoife Ni Chaiside, who had stormed into the game, pushed Slaughtneil ahead.

It took Sarsfields until the 54th minute to get off the mark for the second half and it was a composed finish by Rachel Murray after a direct run. Orlaith McGrath found the target immediately after but Sinead Mellon equalised within seconds.

When Dougan threw over her monster score with normal time almost up, it seemed like Slaughtneil had done it again and would join Buffer’s Alley as the only team to complete a magical four-in-a-row.

But that was to reckon without the magic of the McGrath sisters, who also siblings Clodagh and skipper Niamh operating in midfield.