When Meghan, Duchess of Sussex visited a school to deliver an inspirational speech for International Women’s Day, she asked if there was a male student in the audience who wanted to share what Women’s Day means to him. A boy came forward and, clearly thrilled to share the stage with the duchess, noted that she was beautiful and gave her a hug following his brief remarks. He followed it up by writing a letter of apology to Prince Harry. 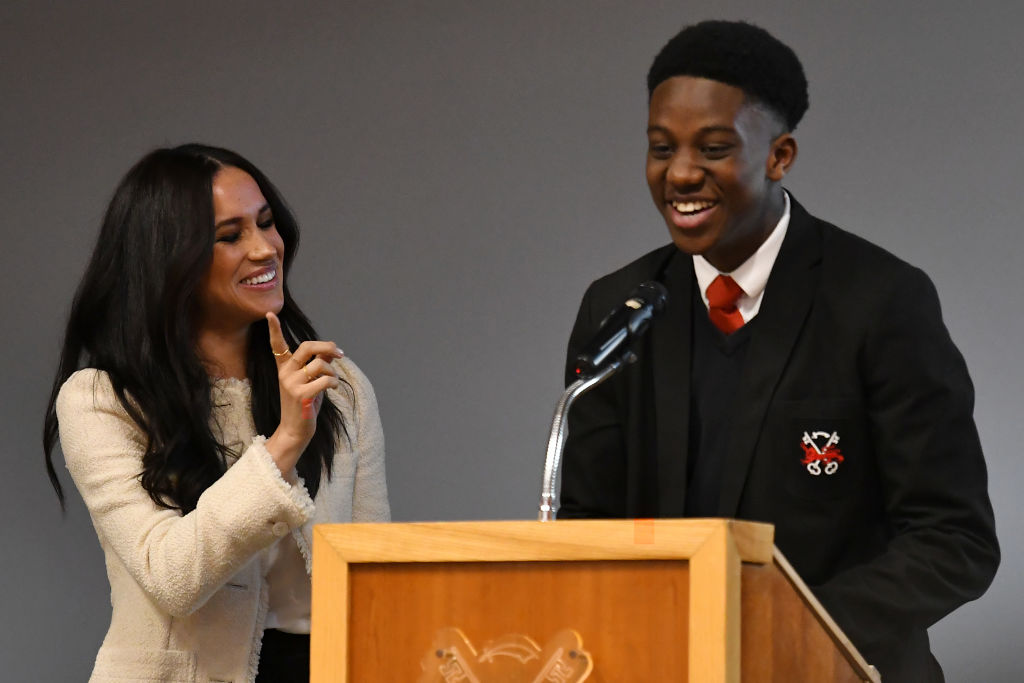 Meghan visited the Robert Clack Upper School in Dagenham, London, where she gave a speech for International Women’s Day, at one point asking if there was a “brave young man” who would like to share some thoughts about Women’s Day.

Schoolboy Aker Okoye took Meghan up on her invitation to the stage, shook her hand and stood at the podium to note that she “really is beautiful.” He then shared how the day reminds him how important women are. After his time at the podium, Meghan gave the excited 16-year-old a hug.

He wrote a letter to Prince Harry

Okoye followed up the interaction with the duchess bywriting a letter to Prince Harry to apologize.

“I’ve written the letter to make sure Harry doesn’t have a problem with it and to say sorry really and that I hope he didn’t mind, he told The Sun. “Meghan didn’t — she found it funny and I’m sure Harry will as well. When she asked which brave young man wanted to do a talk I jumped at the chance. I leapt up there.”

“I thought it would be proper protocol to give her a cuddle. It’s all a blur,” he added.

He explained his apology

His letter was very sweet and funny, it turns out. “Dear Harry and Meghan. Harry, I hope you don’t mind me writing this letter,’ Okoye wrote.

“I hope you didn’t mind me cuddling your wife. I was justoverwhelmed and shocked to see her arrive at my school. It was a pleasure tohear her speech and to speak in front of her as well. She is trulyinspirational,” he continued.

“I nearly met you [Harry] last year when you came to east London to open the Future Youth Zone but I was away with the school. I hope to meet you one day. Good luck for the future. With kind regards, Aker,” he noted.

Okoye chatted with ITV Good Morning Britain about the duchess’ visit to his school, telling Piers Morgan why he came to the stage. “I was passionate about recognizing the strong women in my personal life and really giving them recognition,” he shared.

“I was really embarrassed when I first saw that,” Okoye said of the moment he saw the recording. “I thought ‘oh God, they recorded it.’ I knew they were recording it but I was ugh…”

As for what Meghan said to him after he spoke, he shared that she told him, “You’re very brave, very well said!”

“I didn’t want to cause any more controversy,” the boy saidof the letter he wrote, adding that “There was an Instagram comment on a postthat I was on and they said if I’m dead in the next six months we know who sentthe hit out for me. So I thought, oooh, let me cover myself.”

He also told The Sun how Meghan’s visit was a surprise. “There were rumors a big name was visiting but nobody expected Meghan,” he explained, adding, “It was incredible. She was lovely and down-to-earth.”

He added: “She didn’t seem to mind me kissing her and sayingshe was beautiful. She laughed, along with the whole school.”