Opener Verma,16, has taken the tournament by storm by striking 161 runs in four innings – almost twice as many as any of her team-mates – at an average of 40.25 to rise to top spot in the ICC’s T20 batting rankings.

Her tally of nine sixes and 18 fours has not only spurred India to four wins for four, but has made Harmanpreet Kaur’s side the most potent in the powerplay overs with an average score of 8.25 runs per over.

Two of Verma’s 16 T20 caps have come against England, who lashed 30 off 25 balls in India’s five-wicket victory in the opening match of January’s Tri-Series in Canberra.

But the right-hander fell for just eight the next time the sides met and Greenway told Sky Sports that England must remove Verma cheaply to boost their hopes of winning Thursday’s semi-final, live on Sky Sports Cricket from 3.30am.

“She is unbelievable,” said Greenway, “but it is worth pointing out that she has been doing most of India’s damage with the bat and Harmanpreet Kaur, the captain, hasn’t been in as good a form as they would like.

“She will whack anything full and straight back down the ground. Watching her train today, an area of slight weakness – if you can call it that – is a good length on fourth stump, where she doesn’t seem able to generate much.

“But that’s not a wicket-taking option unless you are going for a soft dismissal. So what they need to do is target the top of off-stump and try to hit the splice of the bat, rather than over-pitch.”

“She’s very naughty, gets so much happiness and positivity to the team, always wants to enjoy it, and when batting with her she’s motivating you and releasing pressure, that’s the kind of player you need in your team,” said Kaur.

“She’s enjoying the moment. Whoever is playing, wants to play for the country and give their best, she’s enjoying for the team. We’re wishing her good luck.

“Now this team has been together for a long time, we learn a lot from each other, learn a lot of cricket. It makes it easier for players such as Shafali because when anybody enters the team, they see everyone is working together.” 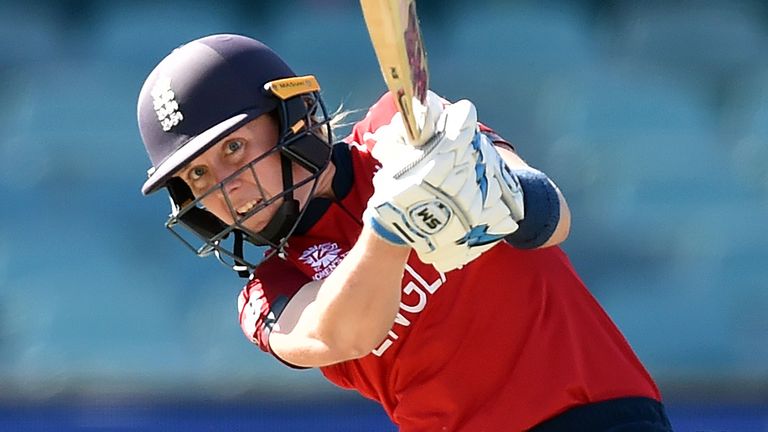 India finished top of Group A after beating Australia in their opening match of the tournament, meaning that they will automatically progress to the final at England’s expense should the heavy rain forecast for Sydney on Thursday materialise.

The teams must contest a match of 10-overs-a-side for there to be an official result and should the weather allow a curtailed contest to take place, Greenway said a shortened game could suit England best.

“It will probably suit England in terms of their bowling attack at the moment,” reflected Greenway. “I think they are at a place where they’ve got five bowlers who they can rely on if it is two overs per bowler.

“In the seam department you have Anya Shrubsole, Katherine Brunt and Nat Sciver – they’ve all been bowling brilliantly – as have Sarah Glenn and Sophie Ecclestone.