The global dominance of the Diamonds has been called into question after the Silver Ferns took out the Constellation Cup for the first time in nine years on Sunday.

Facing another COVID-19 scare and three earthquakes this week, New Zealand became united in support of the Ferns, with the final game of the series attracting a sell-out crowd at Christchurch Stadium. The hosts rode the home support to a 45-43 victory that wrapped up a 3-1 series win. The Diamonds had needed a two-goal victory to retain the Cup in a drawn series. 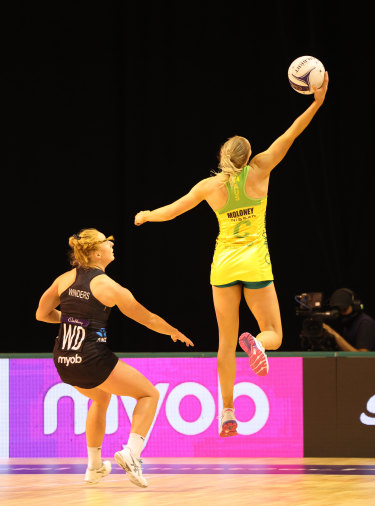 The global dominance of the Diamonds has been called into question after the Silver Ferns took out the Constellation Cup for the first time in eight years on Sunday. Credit:Getty

Both Maddy Proud and Paige Hadley, who are huge figures for the Swifts, failed to have any playing time during the series. Former captain Caitlin Bassett wasn’t utilised at any time during the second or fourth games, forcing current shooting circle Kiera Austin and Cara Koenen to play full games.

The idea of the rotating captaincy from Marinkovich also proved relatively pointless during the series with Liz Watson selected once again for the final game.

Watson took the captaincy off Bassett for the second game, remaining in the role for the final two games.

The first quarter on Sunday was scrappy from both sides with 17 turnovers between them as Australia led 12-6 after the first 15 minutes.

Australia held onto their dominance for a little while longer, managing to keep the scoreline in their favour 22-17 by half time.

Surprisingly, no changes came into the Australia side for the second half. As a result, the Diamonds began to tire and the Ferns surged one ahead of the final quarter, 31-30.

Some changes came into the midcourt, but the effort proved too late, with accurate shooting from the Ferns in the final 15 minutes allowing them to claim a two-goal win.