Sydney to Hobart gets green light after July COVID-19 scare

Save articles for later

Add articles to your saved list and come back to them any time.

Cruising Yacht Club of Australia Commodore Noel Cornish says the Sydney to Hobart race has been given the green light to go ahead after the Tasmanian government announced they would be re-opening the border to NSW from next Friday.

In July, the CYCA feared for the race after two COVID-19 cases were detected at the club. 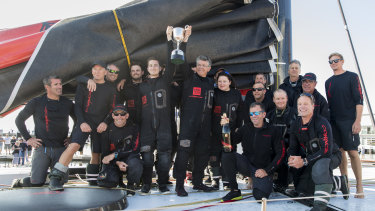 The crew of supermaxi Comanche celebrate line honours in the 2019 Sydney to Hobart.Credit:Getty

"We are very encouraged by that and are probably feeling more optimistic about this race," Cornish said. "The owners of the yachts, the captains and the crew are really elated by this news."

Cornish said the race already has 98 entries which was "a lot more people than we probably expected".

"That is a large group for a year that's not a milestone year," he said.

The CYCA plan to restrict the club grounds to participants only this year for the start of the race with each skipper required to have their own COVID-19 safety plan.

Meetings between organisers and the crew will also occur via Zoom to limit interaction between boats.

End of race parties have also been cancelled for this year with the CYCA limiting the amount of events allowed at the clubhouse during December.

"We've been working really hard to do all the planning necessary," he said. "It will be a lot quieter this year."

There will also not be any international crews racing this year.

"The internationals bring the national rivalry," he said. "There's a lovely atmosphere about the club when you've got internationals there. We will miss them."

Cornish said the hope was that by the time the race rolls around, interstate crews will not be required to quarantine for two weeks.

"Were it is at the moment, we will be guided by whatever the advice of the health officials say," he said. "We are trying to be as cautious as possible."

"We are getting a tremendous amount of sport from the Tasmania government, the NSW Office of Sport and NSW Health. We all want the same thing and that's to have a COVID safe race."

This year's Sydney to Hobart will be the 76th edition of the event.

Sports news, results and expert commentary delivered straight to your inbox each weekday. Sign up here.