The apps that help home-bound workers smarten their appearance

The coronavirus outbreak has meant thousands of workers around the world are now having to work from home, whether they’ve been infected with the virus or not.

The policy is aimed to stop the spread of the virus in areas of the office where the bug can hide, including communal surface areas such as kitchens and door handles.

Global employer Twitter this week told all 5,000 of its workers around the world to work from home because of the outbreak, while major employers including Microsoft and JPMorgan are also encouraging workers to stay away from the office.

Google has also told all employees of its European headquarters in Dublin to go home and the company will also be conducting all Google interviews globally virtually via Hangout, its video call software.

For those who are working from home but still need to make themselves look presentable for conference calls, here are some of the best (and worst) options for artificially smartening-up your appearance. 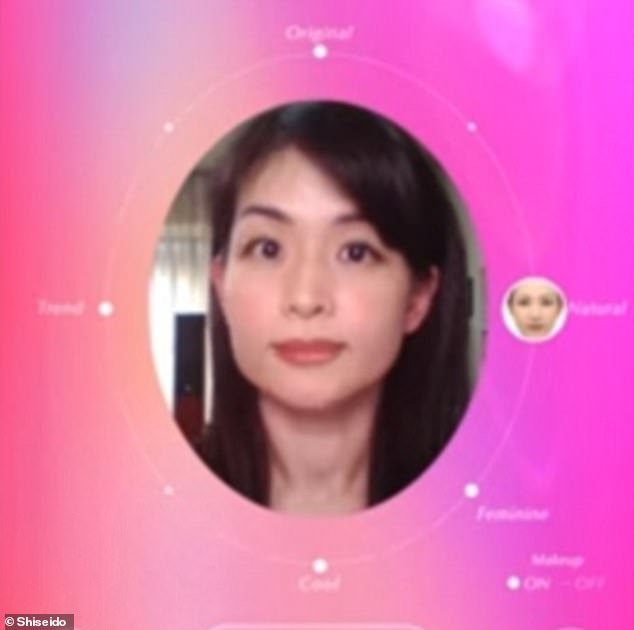 Pictured is the model with the virtual makeup on the TeleBeauty app, which syncs with real-time facial movements, ‘unless the face moves wildly’. Although TeleBeauty markets to females, Koyama says men can also benefit from using the technology

Originally aimed at women who work at home and get a last-minute conference call, the app may see a boost following a surge of companies that are making their employees work from home because of the virus.

Users just have to align their face in the centre of the screen and select one of the four styles of makeup available – cool, trendy, feminine and natural.

They can also select the amount to be applied with a further click before the digital cosmetics sync in real-time with the user’s facial movements.

Shiseido was founded in 1872 but in the last few years it has used smart technology in its products, which also includes an IoT appliance system. 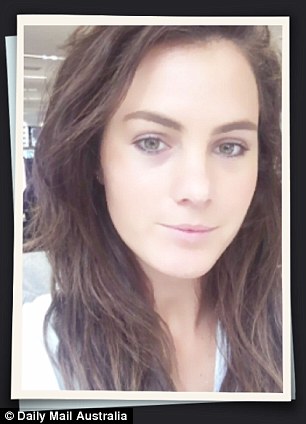 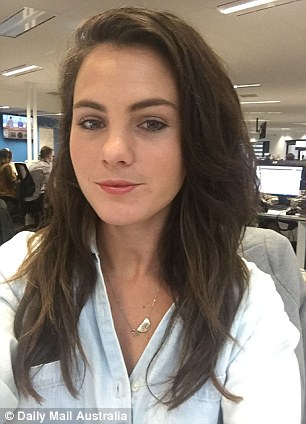 Unconvinced: News reporter, Charlotte, also thought that the app was ‘excessively vain’ – though she did admit that she liked what the app did for her complexion

These features can change your complexion, reduce the glare, fix your oily skin and even thin out your face while you chat.

ChatGame has been touted as ‘a fun and engaging way to connect’ that encourages users to video chat without giving a second thought to their surroundings.

However, MailOnline trials of the app suggest the filters adds an excessive artificial glare to the skin that may simply scream ‘I am using a video filter’ to your colleagues.

At the time of the app’s release, MailOnline news reporter Charlotte called the app ‘excessively vain’.

California-based Zoom Video Communications, one of the leaders in the video conference industry, has also added its own face-enhancing option.

Much more subtle than other appearance-boosting options, the company’s ‘Touch Up My Appearance’ feature ‘retouches your video display with a soft focus’, Zoom says, adding a modest Instagram-worthy tint to a face.

‘This can help smooth out the skin tone on your face, to present a more polished looking appearance when you display your video to others,’ Zoom says.

‘Touch Up My Appearance’ is also fairly hidden in the app – users need to select the Settings cog, followed by ‘Meetings’ to switch on the feature.

On Windows and Macs, users can even select the feature after the participant has joined the conversation – although here’s hoping colleagues don’t notice the change.

Although it hasn’t yet been backed for a general release, a Japanese engineer called Taka Nakahiko has created an AR filter that covers you with a digital suit.

The creation, which is currently listed on GitHub, appears to need a bit of work as it doesn’t completely align with the user’s movements, as shown by Nakahiko’s video.

The skin tones of the filter, which is just a screen shot of a man in a suit, don’t match and contrast noticeably with poor lighting.

However, if the video chat participant were to keep completely still during the call it could possibly fool the more poor-sighted of colleagues.

On the off chance that it does get a widespread release, it could offer a bit of light relief during the epidemic.

For those who like just small touches of make-up for their 9 o’clock one-to-one video call but can’t be bothered to get out of bed, choose Facebook Messenger for a pretty simple lipstick filter that actually looks fairly realistic.

However, avoid pouting to prevent kiss marks from appearing on your cheeks if you’ve selected this filter.

The popular chat app also offers a couple of nice glasses filters, which may give the appearance to your colleagues that you know what you’re talking about when you’d rather be asleep.

To avoid giving your fellow worker a fright, take great care not to select the scary monster filter, or downright weird filter that turns your entire face into a thumbs-up fist.

WHAT YOU NEED TO KNOW ABOUT BEING TESTED FOR CORONAVIRUS

On Tuesday, Vice President Mike Pence announced that any American can be tested for coronavirus as long as a doctor approves it.

The move appears to expand upon previous criteria needed for testing by the Centers for Disease Control and Prevention (CDC).

But how do you determine if you have symptoms of COVID-19 and when you should see a doctor?

We break down everything you need to know about being tested for the virus that has infected more than 120 Americans and killed at least nine.

WHAT ARE THE LATEST GUIDELINES FOR BEING TESTED?

There are three groups of people that the CDC recommends get tested.

1. People with symptoms such as fever, cough or shortness of breath who have been in ‘close contact’ with someone confirmed to have coronavirus

2. Patients with symptoms who have traveled to areas affected by the virus within the last 14 days

3. Those with symptoms who need to be hospitalized and no other cause for their illness is found. They don’t need to have a travel history or exposure to another patient

HOW DOES THIS DIFFER FROM THE PREVIOUS CRITERIA?

When the CDC first began testing, only those with a travel history to China – where the outbreak emerged – or those who had been exposed to a confirmed coronavirus patient were tested.

However, the agency says its criteria for testing is always ‘subject to change as additional information becomes available.’

WHAT TO DO IF YOU NEED A TEST?

Health officials strongly advise that anyone who believes they may be infected not show up unannounced at their doctor’s office in case they expose others to the highly-contagious disease.

Instead, the CDC suggests immediately calling your physician or healthcare provider.

‘Your healthcare professional will work with your state’s public health department and CDC to determine if you need to be tested for COVID-19,’ the CDC’s website states.

If you are suspected of having the virus, you will most likely get tested at a hospital.

The test involves getting a swab of the patient’s nostril and throat. If the patient has a wet cough, a sample of sputum (a mixture of saliva and mucus) will also be collected.

WHY HAS IT BEEN DIFFICULT FOR PEOPLE TO GET TESTED?

There have been multiple reports of people not having accessing to get tested.

The first batch of test kits that the CDC sent to state and local health departments were faulty, which led to a delay.

Secondly, the CDC had strict criteria for testing, which led to missed diagnoses of people who caught the virus from so-called ‘community spread,’ meaning it’s unknown how they were infected.

A third reason is that some health departments did not leave the decision to test up to doctors as the CDC suggested.

For instance, the Massachusetts Department of Public Health initially required doctors to call a hotline to determine if their patients met CDC criteria for testing.

Then, before the test could be administered, it had to be authorized at the State Public Health Lab.

WILL IT BE EASIER TO GET TESTED NOW?

Since the CDC’s testing fiasco, several health departments have either received new kits from the federal agency or made their own.

Additionally, the US Food and Drug Administration expanded its Emergency Use Authorization (EUA) policy so allow more labs can apply for approval to test for the virus.

The CDC that 75,000 test kits are currently available and more are being manufactured.

FDA Commissioner Dr Stephen Han told reporters on Monday that close to one million people would be tested by the end of the week.

But figures from the Association of Public Health Laboratories show that likely no more than 100,000 people would be tested by week’s end.