It’s the breathtaking arts exhibition few in Australia have seen, and may never get the chance to see again.

Illuminating the reputation of a groundbreaking female painter and occultist who believed her art was a “revelation” from higher guides from the spirit world, the survey had been showered with praise by the critics and adored by the few visitors who had made it to the show before lockdown. 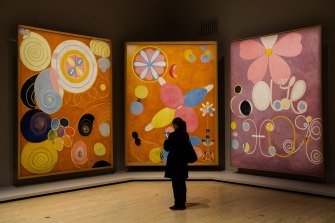 Hilma af Klint: The Secret Paintings at the Art Gallery of NSW. Stored away and scarcely known for decades, the works of Af Klint have been cut short by lockdown. Credit:James Brickwood

Now Hilma af Klint: The Secret Paintings at the Art Gallery of NSW has quietly closed for good after opening to the Australian public for a mere 14 days.

In 2018, Hilma af Klint: Paintings for the Future drew more than 600,000 people to New York’s Guggenheim – more than any other show in the museum’s 60-year history. 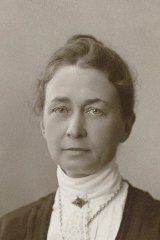 In Australia, pandemic-led lockdowns played havoc with plans to stage the first major survey of the painter’s work in the Asia-Pacific.

The Heide Museum of Modern Art in Melbourne was scheduled to open The Secret Paintings this summer and had to cancel. Its curator Sue Cramer worked with the Art Gallery of NSW to bring the show to Sydney – where the global pandemic slammed its doors shut, too, after a brief two-week opening.

AGNSW director Michael Brand notified art lovers this week that the public health restrictions had crushed any hopes of it reopening. In effect, 129 works, including drawings and notebooks loaned from the Hilma af Foundation in Stockholm, will be packed up and sent to Wellington’s City Gallery in New Zealand.

A celebratory retrospective of the Archibald Prize winners, marking the portrait prize’s centenary year, will also close at the gallery along with an exhibition of this year’s finalists of the Archibald, Wynne and Sulman prizes.

“Our greatest hope is that these exhibitions are able to open at their next venues so future audiences can enjoy them there,” Dr Brand said.

The show had been launched with high hopes and financial backing from Destination NSW to draw interstate and regional tourists to the gallery where visitor numbers were down 60 per cent across the 2020 calendar year.

This masthead’s art critic John McDonald was one of the lucky few to immerse himself in af Klint’s artistic vision.

“On one hand it was great to see a ‘blockbuster’ by an artist whose name wasn’t Monet or Picasso,” he said. “On the other, Hilma af Klint is undergoing a huge vogue because the museum world is looking for important women artists to rediscover.

“The fact that she may have pre-empted Kandinsky and Co. with abstract art is a bonus. The spiritualism also fits in with people’s anxieties about the present day. So she ticks a lot of boxes.

“She got a huge turn-out at the Guggenheim where I saw the show, too, but it would have been wildly optimistic to expect her to take Sydney by storm.”

Af Klint’s posthumous fame rests on a series of spiritualist paintings characterised as abstractions, the earliest of which predate Kandinsky, Malevich, Mondrian, Kupka and Robert Delaunay. The Swedish painter died in obscurity in 1944, having exhibited a handful of times.

McDonald attributes af Klint’s relative anonymity to her associations with spiritualism. She believed her art flowed from higher entities she dubbed ‘the Higher Ones’ through seances with help from a circle of women named The Five.

”Like characters from a pulp novel they called themselves The Five, not to be confused with Enid Blyton’s Famous Five,” McDonald wrote in his review which was to be published for the exhibition’s reopening. “They would experiment with automatic writing and collaborative drawings but it was left to af Klint to take on the grand projet of creating a series of large-scale paintings for a temple that would be built in some enlightened version of the future.” 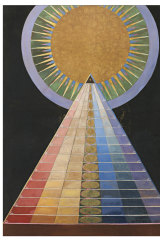 In her will af Klint left instructions that her spiritualist works should not be exhibited for at least 20 years after her death.

Her heirs offered to donate the thousands of drawings, paintings and journal to the Moderna Museet in Stockholm, only to be knocked back by director, Pontus Hulten, who saw it as spiritualist ephemera. It’s a decision the late Hulten, one of Europe’s foremost museum professionals, might have rued.

Af Klint’s large-scale works were impressive no matter how we choose to interpret them, McDonald said. “But this exhibition delves under the surface, incorporating her writings and a cache of late watercolours that reveal much more about the totality of her thinking.

Even allowing for af Klint’s soaring global popularity, this was “the kind of show we don’t normally see in Australia, so the AGNSW deserves credit for taking the risk with an apparent non-blockbuster.”

The Heide Museum of Modern Art led negotiations with Stockholm’s Hilma  af  Klint Foundation for the works to come to Australia. The museum was unable to proceed with a show scheduled for 2021 summer, due to the knock-on impacts of COVID-led restrictions and multiple closures in 2020 that affected the institution’s forward program.

Heide’s artistic director Lesley Harding said the latest announcement by the Art Gallery of NSW was disappointing but not unexpected.

“She was a groundbreaking artist,” Ms Harding said. “It’s always been important for Heide to represent the careers of women artists who historically have been overlooked. That was our original motivation. We are a museum of modern art and she was a precursor to modernist movements in Europe and Australia in the 20th century.”

The Booklist is a weekly newsletter for book lovers from books editor Jason Steger. Get it delivered every Friday.