The IOC has shown it can throw its weight around, but it won’t on China

Closing those velvet drapes on another Olympic Games invariably leaves you somewhat abandoned, even if watching from way afar in Fortress Australis. That feeling is only accentuated, given so many openly (and rightfully) questioned whether these Games should proceed at all. What an incomparable spectacle.

One saving grace is that it’s only three years until Paris, not the usual four. A second? The Paralympics are likewise excellent; in some ways, more so. 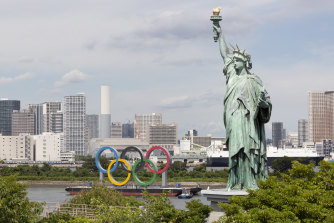 The Beijing Winter Olympics, less than six months away, remain the elephant in the room for the IOC.Credit:Getty

But although three years is a long time to wait, for some it might as well be three millennia. Moves by the International Olympic Committee, while assembled in Tokyo, to amend the Olympic Charter are foreboding.

That the IOC has moved to clarify and codify that the IOC in session (basically, in general meeting) can remove a sport from the Olympic program isn’t a change made for no reason. I promise you; the IOC wants this express power to delete a sport – if for example its governing international= federation radically misbehaves, or acts in a manner likely to tarnish the Olympic Movement – for actual, and very real circumstances.

Squarely in the crosshairs is weightlifting – one of the foundation sports of the Modern Olympics. A discipline which has appeared at every Games since and including Athens 1896. A marriage of sport and theatrics and impossibility without peer.

There are wickedly valid reasons as to why the IOC has made these changes. Weightlifting can be saved as an Olympic sport, but harsh realities must be faced; the most fundamental of paradigm shifts needs to not only happen, but be wholly embraced. Almost instantly. 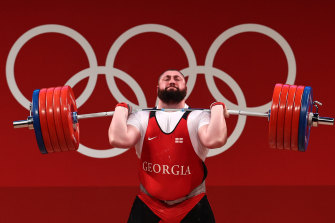 Weightlifting, among the cornerstones of the modern Olympics, will learn its fate within weeks.Credit:Getty

Those radical decisions and the most elemental changes must be made in a fortnight. Closer to then, I will have infinitely more to say. And I reckon that I can speak, with some authority.

For the last 10 months I’ve presided as chairman of the International Weightlifting Federation’s Reform and Governance Commission. It’s me you who’s actually written these proposed new rules and constitution which world weightlifting must embrace, lest the sport be removed for Paris 2024.

In a fortnight it’ll be the eve of the IWF’s Constitution Reform Congress. But for now it’s perhaps worth considering another nasty conundrum which just won’t go away: China.

In 2015, the IOC awarded Beijing the 2022 Winter Olympics. Six months from the opening ceremony there remain deafening calls for China to lose that honour on account of myriad human rights abuses.

There’s no nation on earth more dismissive and destructive of universal human rights than China. Not one.

You want to talk about deleting sports – how about stripping countries of hosting rights? The Chinese Communist Party’s record on human rights is appalling; China’s treatment of its own people is atrocious.

China’s citizens live under the all-seeing gaze of state-orchestrated surveillance systems George Orwell couldn’t have dreamed up. The rampant and never-ending abuses of the ethnic minority Uighur people, who inhabit the Xinjiang region of northwest China, includes imprisonment, abuse and the “reprogramming” of millions.

How many thousands have perished (or been perished by the state) in those same conditions, is incalculable. Moreover and by further example, the CCP’s continued, maniacal crackdown on democracy and freedom of speech in Hong Kong has forever made a mockery of China’s constitutional lie – its “One Country, Two Systems” promise. Free press in Hong Kong is dead.

More than seven million citizens of Hong Kong now live under wickedly different conditions to those that applied when the IOC made its decision regarding the 2022 Winter Olympics. Maybe the easy solution is that the IOC should reverse its awarding of the Games; hosting an Olympics is a high privilege. 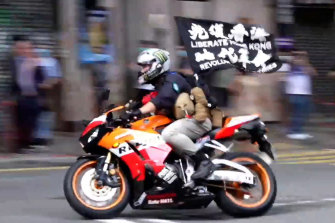 Citizens in Hong Kong today live in conditions dramatically different to those in 2015 when China was awarded the Winter Olympics.Credit:Cable TV Hong Kong

Then again, such questions don’t come with precedent. Is it a sufficient problem for the IOC, that (for example) in 2020 it’s estimated by Amnesty International that China put thousands of its citizens to death, even during a global pandemic? The CCP’s raging appetite for carrying out capital punishment sentences outstrips known cases throughout the entire rest of the world, by a multiple of many. It’s certain that China puts thousands of its citizens to death annually, the exact number is guarded as a state secret.

The Olympic Charter – the same Charter amended to open up the channel to exclude specific sports – operates as the constitutional spine of the Olympic Movement. The Charter requires host cities and countries to guarantee that they, and their applicable public authorities, shall comply with and respect the human rights dignities and principles laid bare therein.

Directly on point, it states that ‘the goal of Olympism is to place sport at the service of the harmonious development of humankind, with a view to promoting peaceful society concerned with the preservation of human dignity’.

When the IOC awarded the Winter Olympics to Beijing in 2015 (and for that matter the 2008 summer Games), it did so contractually requiring the Chinese Communist Party to undertake and guarantee that China and its public authorities would comply with and respect the Olympic Charter.

The IOC reserves and retains the right, at any time and without recourse to compensation, to withdraw the right of a city to organise and host an Olympics. That power hasn’t ever been exercised.

There’s a core putridity in the way the Chinese state treats its people, which sits entirely in breach of the utopian ideals spoken of in the Olympic Charter and the standards of any reasonable person. While it’s difficult to qualitatively analyse whether the situation has deteriorated in China since 2015 it’s impossible to conclude that China’s human rights abuses have abated.

There’s no nation on earth more dismissive and destructive of universal human rights than China. Not one.

The IOC won’t under any circumstances relieve Beijing of the privilege of hosting the Games. The simple fact is that China shouldn’t ever have been awarded the 2022 Games in the first place.

Sports news, results and expert commentary. Sign up for our Sport newsletter.