The last giant of the Country and National parties, Doug Anthony, has died, severing one of the country's last remaining links to the Menzies government.

Mr Anthony, the nation's longest-served deputy prime minister who was a key player in the constitutional crisis of 1975 who also took important steps to modernise the then Country Party, died on Sunday aged 90. 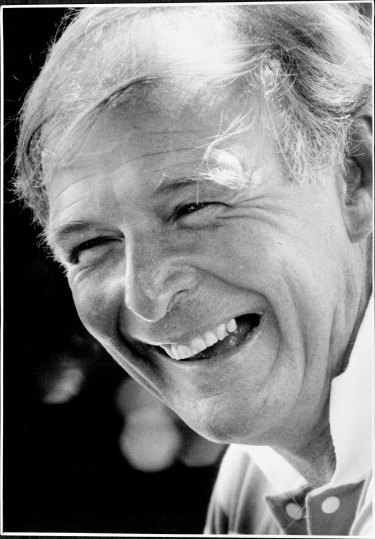 Doug Anthony at his Sunnydale property in northern NSW soon after his retirement. Credit:Peter Morris

His family confirmed in a statement that Mr Anthony died peacefully in the Heritage Lodge aged care home in Murwillumbah on the NSW North Coast which he represented as the member for Richmond between 1957 and 1984.

"Although Doug was privileged to serve the people of Australia in high office, he always considered his family to be his greatest legacy and contribution to the world," the family said.

"He was very much a man of the Tweed region, and it is fitting that he should depart this life from within the community that he loved so much.

"His family is tremendously proud of his legacy. While always very humble, he made a lasting contribution to the nation, and particularly to people in country Australia."

Mr Anthony entered Parliament at the age of 27 after the death of his father, Larry Snr, who had served as postmaster-general in the early 1950s Menzies government.

He was made interior minister in 1964 and became deputy leader of the Nationals the following year to John McEwen. In 1967 he became primary industries minister.

One of his most contentious policy changes involved the wool industry and the creation of a wool reserve price scheme. Popular among growers early, the scheme ultimately fell apart and left the country with a 4 million bale wool stockpile by the 1990s.

When Mr McEwen retired in 1971, Mr Anthony became Country Party leader, deputy prime minister and trade minister in a role through which he sought to expand Australia's trade links with Asia.

Mr Anthony had a poor relationship with then prime minister Billy McMahon to the point they rarely spoke. Mr McMahon refused to reveal to his deputy when the 1972 election would he held at which Gough Whitlam's ALP ended 23 years of continuous Coalition government. 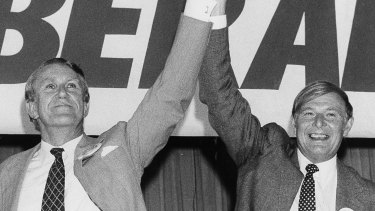 Doug Anthony and Malcolm Fraser at a Liberal Party rally in Sydney in 1980.Credit:Paul Murray

After the 1975 constitutional crisis, Mr Anthony returned as deputy prime minister, this time to the Liberal Party's Malcolm Fraser.

Again as trade minister, he was instrumental in putting together the Closer Economic Relations agreement with New Zealand that would ultimately be signed into law by the Hawke government.

During his time as acting PM, Mr Anthony would often run the country from his caravan at New Brighton in his electorate.

National Party leader and Deputy Prime Minister, Michael McCormack, said everyone in the party recognised the contribution made by Mr Anthony over the years.

"He was a giant of the party. We all stand on the shoulders of giants and Doug was one of those giants," he told The Sydney Morning Herald and The Age.

"He was a man with no pretences who was passionate about regional Australia," he said.

By the time of his retirement in 1984, Mr Anthony had been deputy prime minister for almost 10 years and leader of the Nationals for 12 years.

His son, Larry, won the federal seat of Richmond for the Nationals at the 1996 election. The Anthony family held the seat for a combined 55 years between its creation in 1901 and Larry Anthony's defeat at the 2004 election. It has since been held by Labor's Justine Elliot. 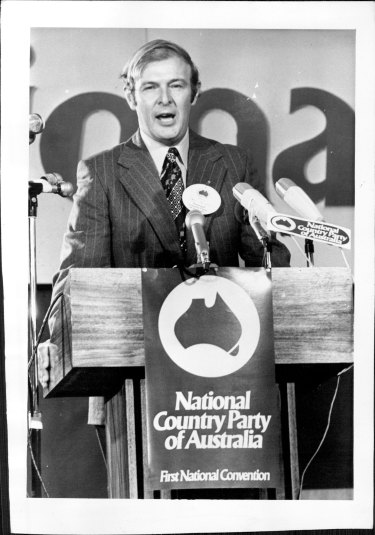 Doug Anthony sought to modernise the Country Party, overseeing the change in its name to the National Country Party.

Ahead of the 1999 republic referendum, Mr Anthony surprised many within the National Party by backing the break from the constitutional monarchy.

"I think the time has arrived for Australia to be truly independent. While we have the monarch as part of our constitution, we are carrying a relic of the past," he told the ABC.

His death means there is just one member of a Menzies ministry, Ian Sinclair, still alive. Mr Sinclair succeeded Mr Anthony as National Party leader in 1984.

He became known to newer generations when his name was adopted by the musical comedy group, the Doug Anthony All Stars.

A member of the troupe, Paul McDermott, noted on social media the death of Mr Anthony.

"Doug Anthony has passed. When Andrew Denton organised a TV meeting between Doug & DAAS, we knew our humour was not to his taste, and we’d hijacked his name. I found Doug generous, kindly and accepting. Vale. I’m thinking of Doug, and his loved ones on this sad day," he said.

He is survived by his wife Margot, his three children and nine grandchildren.