With Roe v. Wade in the balance, a decision on whether a Louisiana abortion law is constitutional will likely come down to Chief Justice John Roberts and Justice Brett Kavanaugh. 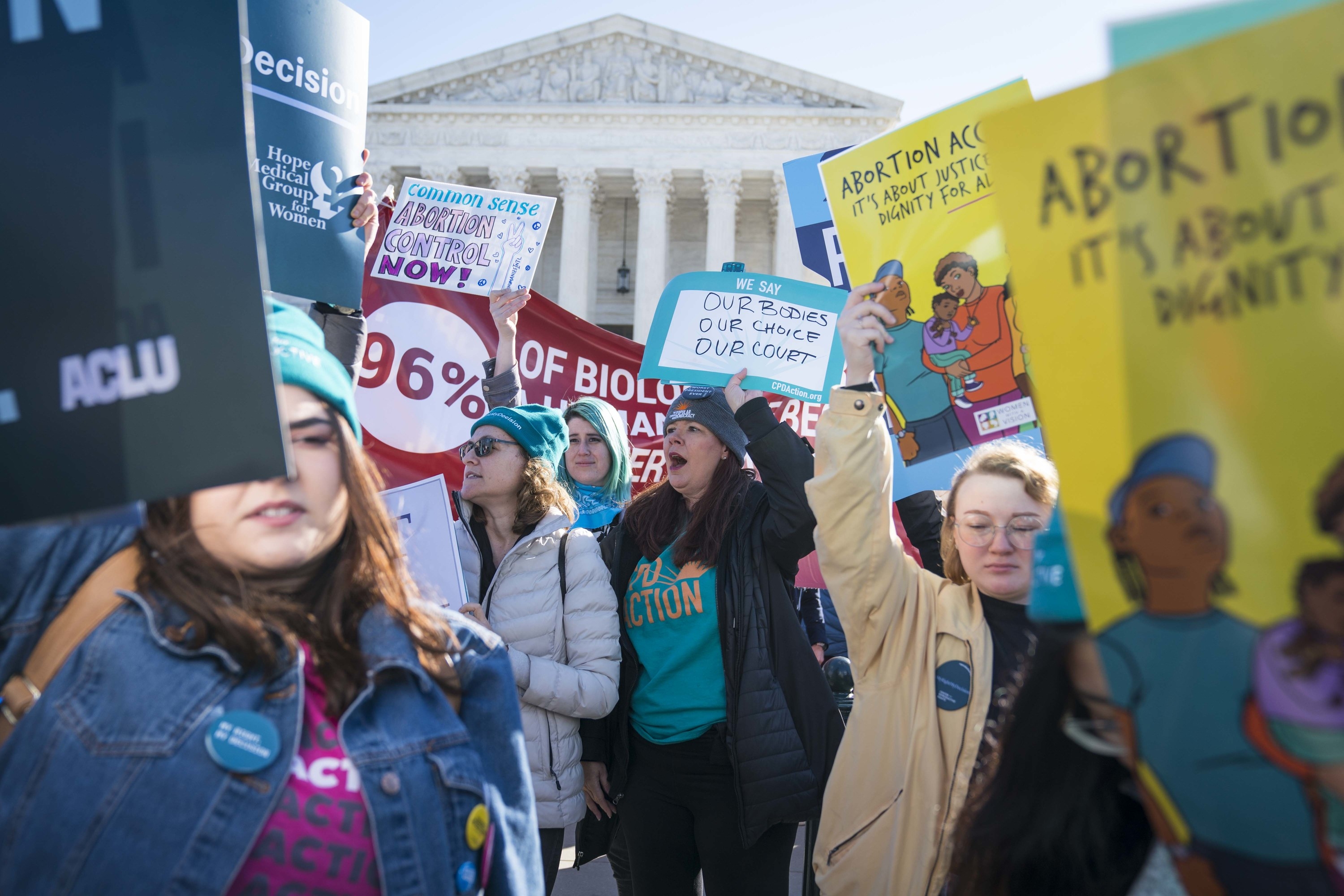 WASHINGTON — The Supreme Court heard oral arguments Wednesday morning in the first major case on abortion rights since President Donald Trump appointed two justices to the court, a case that could threaten the national right to abortion.

As hundreds of protesters gathered on the steps of the Supreme Court, making speeches and yelling pro– and anti–abortion rights slogans at each other, the justices questioned attorneys in the case and focused their questions on precedent and whether laws like the one they are considering should be determined on a state-by-state basis or nationwide.

The case at issue examines whether doctors performing abortions in Louisana should be required to have hospital admitting privileges, a requirement that would likely leave only one doctor able to legally perform the procedure in the state. The case also looks more broadly at whether doctors have the ability to file the lawsuit on behalf of their patients.

The Louisiana law is nearly identical to one in Texas that the Supreme Court overturned in 2016, a decision that was a major win for abortion rights and helped increase access to the procedure in several states. The main issue that was at hand Wednesday was whether that precedent applies in this case, or whether making a different decision in Louisiana would overturn the court’s prior decisions.

“This case is about respect for the court’s precedent,” Julie Rikelman, an attorney for the Center for Reproductive Rights who was arguing against the Louisiana law, said at the very start of the hearing Wednesday. “Nothing has changed that would justify this legal about-face.”

During the arguments, the court appeared divided. Chief Justice John Roberts — who is expected to be the swing vote that decides this case — asked the attorneys on both sides of the case repeatedly about whether the court should undertake a state-by-state review, depending on different facts in each state, when examining a law’s restrictions.

Justice Brett Kavanaugh, who was hearing a major abortion case for the first time in his tenure on the Supreme Court on Wednesday, asked similar questions. Neither justice indicated whether they had made up their minds, but their questioning suggested that the idea of overturning precedent and how broadly it applies will be the determining factor in the court’s decision.

The four liberal justices on the court spent much of their time highlighting the precedent the Supreme Court has already set on the issue and questioning attorneys about whether the Louisiana law was actually intended to make abortion safer, or if it was simply passed to make it less accessible. Kavanaugh’s fellow Trump appointee, Neil Gorsuch, and conservative Justice Clarence Thomas both stayed silent throughout the oral arguments.

The Supreme Court will likely not issue its opinion in the case, called June Medical Services v. Russo, until late spring.

The Louisiana law passed in 2014, and abortion clinics in the state sued over it. Two years later, in Whole Woman’s Health v. Hellerstedt, the Supreme Court struck down the similar law in Texas, which had already gone into effect and caused half of the state’s clinics to close. In the wake of Justice Antonin Scalia’s death, the 2016 vote was 5–3 with Roberts dissenting.

Justice Anthony Kennedy, who has since retired, agreed with the court’s four more liberal justices in that case: Though the state has a legitimate interest in protecting the health of pregnant people, there was no evidence that admitting privileges actually did anything to help them. Further, there was clear evidence that it made abortion much less accessible.

The 2016 decision reaffirmed the idea that it is unconstitutional to place an “undue burden” on access to abortion, a benchmark used by the Supreme Court in every case examining abortion regulations since it was established in the landmark 1992 case Planned Parenthood v. Casey, which upheld the national right to the procedure.

In that case, the court also denied a review of admitting-privilege laws in Wisconsin and Mississippi, allowing the laws to be struck down by lower courts. Like those laws, Louisiana’s was modeled off of the Texas law overturned in Whole Woman’s Health. A district court found the Louisiana law unconstitutional, stating that, if implemented, it would close two of just three abortion clinics in Louisiana, leaving one doctor that could perform abortions.

Then in 2018, in a very unexpected move, the US Court of Appeals for the 5th Circuit reversed this decision, letting the law stand. The plaintiffs in the case rushed it to the Supreme Court to request an emergency stay to prevent the law from going into effect in Louisiana. The stay was granted, and the court agreed to take up the case. Roberts, despite having opposed striking down the Texas law, sided with the liberal justices to grant the stay.

After the Supreme Court took up the petition, Louisiana’s legal team requested a new question be added to the case: whether June Medical Services and its doctors have the ability to challenge the law on behalf of their patients. This point, called the “third-party standing” question, is a legally complex one that could apply to cases outside of the issue of abortion. Justice Thomas brought it up the issue in his dissent to Whole Woman’s Health and anti-abortion advocates have been pushing it for years.

Typically, third parties are not legally allowed to file lawsuits on behalf of other people, but exceptions are made in cases where the plaintiffs have a “close relationship” with the damaged parties, as past Supreme Court cases have put it. The Center for Reproductive Rights argues that this clearly applies to this case, not only because there is extensive precedent of abortion doctors being able to sue on behalf of their patients (which is the way in which the majority of cases challenging laws restricting abortion are filed), but because it would be incredibly difficult for a woman who is pregnant and desperately trying to obtain an abortion to file a lawsuit and go through a full legal case before she is too far along in her pregnancy for her to legally get an abortion.

Louisiana argued that this “close relationship” standard should not apply to abortion doctors because those doctors usually do not see a single patient more than a couple of times, and because there is a conflict of interest for doctors who are being regulated by the law. The law is intended to protect patients from unqualified doctors, Louisiana’s solicitor general, Elizabeth Murrill, argued in the Supreme Court Wednesday, letting the doctors sue on the behalf of the people the law is protecting is contrary to that goal.

Justice Stephen Breyer, who wrote the opinion striking down Texas’s admitting privileges law in Whole Woman’s Health, asked the attorneys questions Wednesday that served to emphasize the importance of precedent in this case.

“How many abortion cases have allowed” third parties to sue on behalf of affected patients in the Supreme Court, Breyer asked Rikelman. “I counted eight,” he said. She agreed.

So we would have to overrule eight prior cases? He asked. Rikelman responded that yes, she believes they would.

Later he asked Jeffery Wall, an attorney with the US Department of Justice who was arguing on behalf of Louisiana, whether he was suggesting that the Supreme Court should overturn precedent that goes back to the 1800s. Wall, sputtering slightly, denied this.

“You just want to go back 40 years then,” Breyer retorted, likely referring to Roe v. Wade.

The Louisiana law, called the Louisiana Unsafe Abortion Protection Act, required doctors to have admitting privileges at hospitals within 30 miles of the facility. This means the doctor must be a member of the hospital’s staff, with a granted ability to admit and diagnose patients.

Liberal justices Elena Kagan, Sonia Sotomayor, and Ruth Bader Ginsburg spent most of their questions focused on the true intent of the law, whether Louisiana’s defense that it was to make sure patients seeking abortions were safe in the case of emergency, was true.

Ginsburg, especially, focused her questions on the necessity of the law.

“Do you dispute that first-trimester abortion” is one of the safest medical procedures there is, “even safer than childbirth?” She asked Murrill. Murill did not give a direct answer.

Ginsburg asserted that, in the vast majority of cases where someone requires hospitalization after an abortion, it is during a medication abortion that she undergoes at home. She asked Murill and Wall that, if this was the case wouldn’t it make more sense for her to go to a hospital near her home, rather than one within 30 miles of the abortion clinic as the Louisiana law requires.

Wall conceded that the majority of complications happen once the abortion patient is at home, but sometimes they happen at the clinic.

Of the conservative justices on the court, Justice Samuel Alito challenged Rikelman the most, asking her questions about whether there was a conflict of interest for doctors to file this suit, which Rikelman denied, and how hard the doctors actually tried to get admitting privileges.

Kavanaugh and Roberts seemed to have similar concerns about the case. Kavanaugh asked Rikelman repeatedly whether she thought that all admitting privilege laws were unconstitutional, even in states where doctors could easily access admitting privileges. She answered that essentially, yes.

Roberts asked a similar question, whether the law should be considered on a state-by-state basis depending on how much it limits access and other facts, or whether it is a nationwide decision, as Whole Woman’s Health was widely interpreted to be. The attorneys arguing on behalf of Louisiana responded that they thought it was a state-by-state consideration, and in the case of Louisiana the benefits of the law outweighed the cost.

On the steps of the Supreme Court after the hearing, attorneys for the Center for Reproductive Rights both told BuzzFeed News they were hopeful — Rikelman used the term “cautiously optimistic,” and her fellow attorney T.J. Tu, who did not argue in the hearing, said he was “elated.”

“I’m feeling great,” Tu said, adding that he was encouraged by Roberts’ and Kavanaugh’s questions. “We have always argued the case that there should be a broad majority on the court to recognize that there is no difference between this case and the case the Supreme Court decided only four years ago, and it seems like that’s true.”