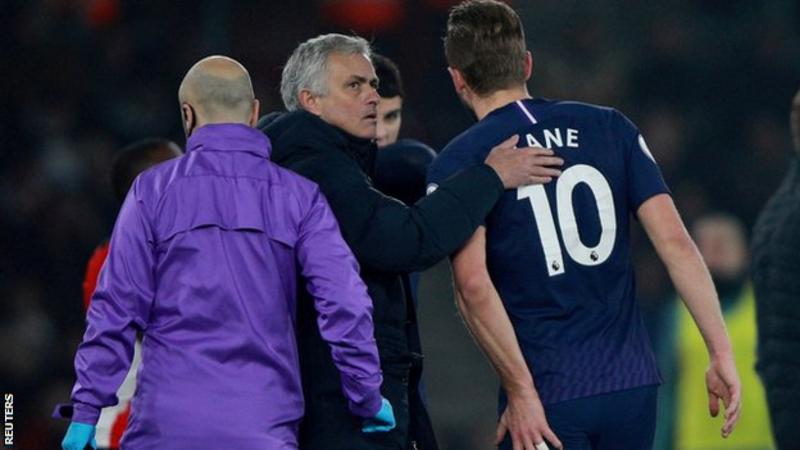 Tottenham manager Jose Mourinho admits changes have to be made to his squad in the summer after a spate of injuries derailed the club’s season.

“We know that we have to build a squad more balanced for next season,” said Mourinho, whose team are five points behind fourth-placed Chelsea.

“You have to be ready to cope with these unpredictable things.”

Spurs saw their FA Cup challenge end this week with defeat on penalties at home to Norwich, their fourth successive defeat in all competitions.

They face Burnley at Turf Moor on Saturday knowing the Clarets would move above them in the table with a victory.

Lloris dislocated an elbow against Brighton in October and having returned in January after surgery, the France goalkeeper has now missed the last two matches with a groin problem.

Talisman Kane, the club’s top scorer for the last five seasons, also needed surgery and has been out since New Year’s Day with a ruptured tendon in his left hamstring.

Influential forward Son sustained a broken arm against Aston Villa on 16 February, while combative midfielder Sissoko has not played since 1 January and is another to require an operation, this time to repair medial collateral ligament damage in his right knee.

“Obviously people are tired of listening to it but the run of injuries this club had this season is something really crazy,” said Mourinho, who was appointed as Mauricio Pochettino’s successor in November.

“We have to prepare ourselves for something similar to happen again and we have to build a squad that protects against this kind of situation.

“But I believe that any club that loses four fundamental players at the same time, doesn’t matter the squad you have, any team would always feel a situation like this.”

Pochettino guided the Lilywhites to four successive top-four finishes and took the club to the Champions League final last season but Mourinho faces a 1-0 deficit from the first leg in the round of 16 tie with RB Leipzig in this year’s competition, while his team are seventh in the league.

The Portuguese had claimed he would have to prioritise either Saturday’s league game at Burnley or Tuesday’s Champions League trip to Germany because of the injury crisis.

He has since relented but is not prepared to find himself in a similar position next term, adding: “We need to give a different shape to the squad to be ready for these unexpected things that happen to us, but we all know that we have to try to win tomorrow and we have to try to win on Tuesday.”