Virginia became the 23rd state to abolish the death penalty Wednesday after Governor Ralph Northam signed legislation that would end the use of capital punishment in the commonwealth.

“There is no place today for the death penalty in this commonwealth, in the South, or in this nation,” Northam said in a speech Wednesday before he signed the bill. He called capital punishment “fundamentally flawed” and noted that it was disproportionately levied against Black people.

Over Virginia’s 400-year history, the commonwealth has executed more than 1,300 people — more than any other state, Northam said. Virginia will become the first state of the former Confederacy to abolish the death penalty, according to the Death Penalty Information Center.

“Virginia has a long and complicated history like other Southern states,” Northam said. “The racism and discrimination of our past still echoes in our systems today and as we continue to step beyond the burden of that past, it is vital that we also change the systems in which inequality continues to fester.”

In the 20th century, more than 296 of the 377 defendants that Virginia executed for murder were Black, Northam said, and since 1976, nearly half of the 113 people executed in the state were Black.

The two men who are currently on death row in Virginia will have their sentences reduced to life imprisonment, according to the legislation. Both men are Black. 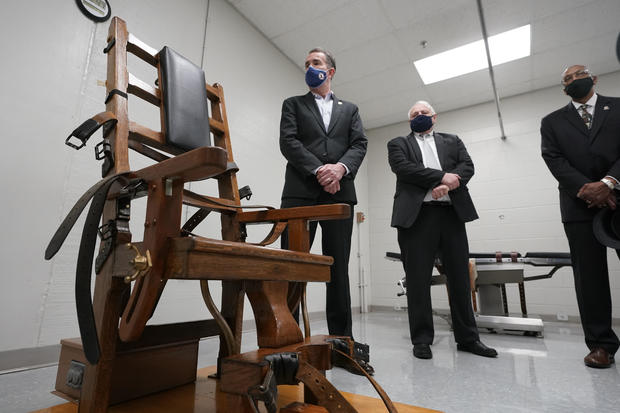 The Death Penalty Information Center — which does not take a position on the death penalty but is critical of its application — says Virginia’s move to abolish the penalty represents a national move away from capital punishment. In the U.S., both death penalty sentences and executions have reached historic lows, the group says.

Virginia’s General Assembly, which has been controlled by a Democratic majority for a second year, approved the legislation last month.

Kristina Roth, the group’s senior advocate for criminal justice programs, said a Black defendant in Virginia is three times more likely to be sentenced to death if the victim is white rather than Black. “Virginia, once a stronghold of the confederacy, now becomes the first Southern state to end the ultimate denial of human rights that is the death penalty,” she said in a statement to CBS News.

“It is a powerful thing to stand in the room where people were put to death,” he said. “It is the moral thing to do to end the death penalty in the Commonwealth of Virginia.”

In the U.S., 42% of those on death row are White, while 41% are Black and 13% are Latinx, according to the Death Penalty Information Center.

Audrey McNamara contributed to this report.