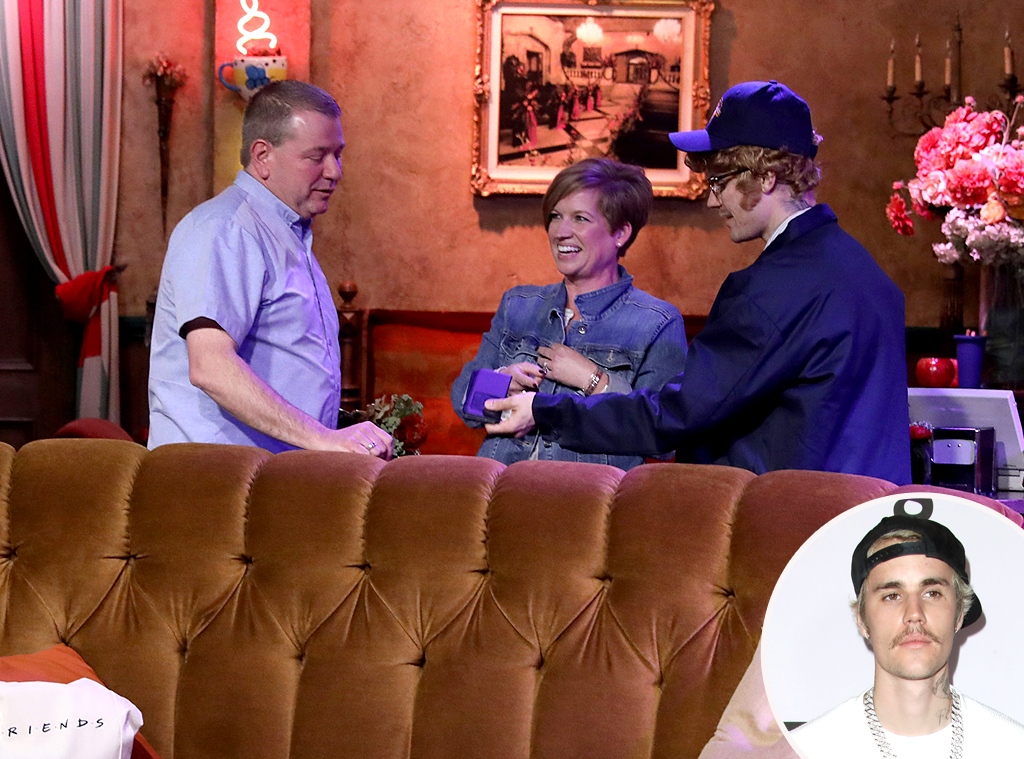 Could this be any more amazing?

On Friday, some unsuspecting Friends fans got the souvenir of a lifetime when Justin Bieber went undercover to the show’s set on the Warner Brothers Studio Tour in Los Angeles with The Ellen DeGeneres Show. Just last month Jennifer Anistondid a similar prank, leaving fans totally stunned when she photobombed their pictures.

Disguised as a tour guide, the “Yummy” singer donned an official Warner Brothers Studio uniform and brought back his mustache to surprise guests as they checked out the iconic orange couch and toured Central Perk. To kick off the epic prank, Justin greeted a pair of fans with a Canadian-inspired accent and asked the tourists questions about the beloved ‘90s sitcom. “Do you have a favorite character?” he asked the fans, who listed Matt LeBlanc‘s Joey. “I’m a Joey guy too…Can you say, ‘How you doin?'”

For the next group, Justin wanted to make sure that the guests felt at home while sitting on the couch.

Taking his job a little too seriously, he dramatically fluffed the throw pillows and did his best to tidy up. “Stand up, check this out,” he said as he beat the couch cushions, revealing an alarming cloud of dust. “Hasn’t been washed a day in its life…This has never been washed.”

Channeling his inner photog, the “Intentions” singer guided a group through their souvenir photograph and gave them pose suggestions. But for the next group, he experienced some camera troubles and had to improvise. To make sure the couple had a memento from their visit, Justin asked if he could take their picture using their phone instead.

“Actually, I can probably—don’t tell anybody. I’m gonna use your phone,” he told the guests. “See, I just can’t have you tell anybody because they’ll have my ass. Seizing the moment, the “Baby” singer also took a selfie with the duo and held an impromptu photoshoot. After making the couple pose for a series of awkward photos, Justin took off his disguise.

Unfortunately for Justin, one group recognized him right away. Trying his best to divert their attention and keep the prank going, the “Sorry” singer asked if they could join him in singing “Smelly Cat” from the show.

After airing the clip on Friday’s episode of The Ellen Show, guest host Demi Lovato revealed that the first couple that Justin met was actually in the audience—and that they had just realized they met the star while watching the video in real time.

Seeing the couple in the audience, Justin asked, “You had no idea until right now? You thought it was just some weird guy? Hey, let me tell you, did you think the guy was weird or did you think he was kind of cool?” The shocked fan responded, “I thought he was both.”

Watch Justin go undercover and surprise some lucky Friends fans in the hilarious video above!