Welcome back, Hollywood, we (sort of) missed you 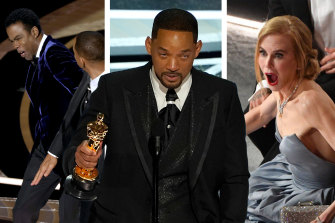 The slap watched around the world.Credit:AP

The pandemic has been cruel to Hollywood; since 2020 the global population has had quite big fish to fry, existentially speaking, and very little opportunity to go to the movies.

Furthermore, as various celebrities have found out the hard way, we don’t care about their problems as much as we used to.

But now that we are easing out of the COVID-19 crisis, it is time for Hollywood to resume its supremacy at the heart of its American story.

What better way to achieve that than with a famed actor slapping a comedian live on stage, provoked by an insult to the former’s wife, and following on from an in-memoriam tribute for Golden Girls actress Betty White, performed by Jamie Lee Curtis and a puppy.

Naturally, the slapper, Will Smith, went on to win Best Actor Oscar, and the comedian, presumably, is now in a bunker somewhere in Calabasas, his agent’s phone running off the hook.

Smith wept as he accepted his gong for his role in King Richard, where he plays the strong-willed father of tennis champions Serena and Venus Williams.

“Richard Williams was a fierce defender of his family,” Smith said.

“I am overwhelmed by what God is calling on me to do and be in this world.”

The nurses, doctors, hospital cleaners and supermarket workers who have risked their lives during the pandemic, surely paused their toils to nod along.

“In this business, you’ve gotta have people disrespecting you, and you’ve got to smile and pretend that’s OK… love will make you do crazy things.”

Smith did apologise, and it was hard to be too cross with him, even though he had just assaulted a man on live television and then turned it into a sentimental speech about God, family and how, when you’re wildly rich and successful, the haters gonna hate.

Social media was aflame with reaction – quite honestly, this is the most exciting thing that has happened to us in years.

Was Rock’s insult an egregious slur on the sick and disabled? Was Smith justified in slapping Rock? Or was it an example of toxic masculinity in an Armani suit?

For many watching it was galling to see a man “defend” his wife by slugging another bloke. The lighting was nice, but it was still ugly male violence.

Some assumed Smith would be escorted off the stage and handed to the LAPD; he had just assaulted a man.

But this is America – never bet against the power of fame.

It hardly matters now because Hollywood has given us this gift, and no one can take it from us.

We can savour it for weeks, and rejoice in the tide of GIFs and memes that will surely flow.

Unaccustomed to social interaction, over-sensitive to insult, hyper-vigilant for threats and all completely crazed in our own special way.