What ‘A Different World’ Taught Me About Love And Sex

Thirty-five years ago we fell in love with Whitley, Dwayne, Freddie, Kim, and Ron on the iconic show, A Different World. I was only two at the time of the show’s debut in 1987 and did not become an avid viewer until its syndication during the late 90s and early 00s. However, it had a profound impact on my life.

Because of A Different World, a sitcom about a fictional historically Black college, I chose to attend Elizabeth City State University, a real HBCU in North Carolina. The series provided me with the most accurate blueprint of who I could be and the kind of relationships I could have as a young Black woman finding her way in the world. Watching the ever-changing saga of Dwayne and Whitley, and how they navigated the ebbs and flows within their circle of friends provided me with great insight and knowledge about things I would later encounter in my college years such as love and relationships, sex, reproductive justice issues, H.I.V./AIDS, sexual assault, contraception and young adult pregnancy.

A particularly memorable episode for me was the H.I.V. and AIDS episode in Season 4. Back in 1991, there wasn’t much mention of H.I.V./AIDS on television, as there was barely much mention of condoms. So when A Different World dedicated an entire episode to addressing the H.I.V./AIDS epidemic, it hit home for a lot of Black kids in the 90s, including myself. There was a lot of miseducation surrounding H.I.V. during that time, as people often associated it with being a “white gay man’s” disease. It didn’t really hit home with many Black people until Black celebrities like Magic Johnson and Eazy E contracted it. The show used prime-time television to dismantle misinformation by dispelling myths about the virus. In the episode, Josie, played by Tisha Campbell, discloses her H.I.V. positive status during class, which creates dialogue about protection and the stigma surrounding the condition. This episode helped me and I’m sure many of my peers rethink what we believed an H.I.V. positive person “looked” like and how it was acquired. 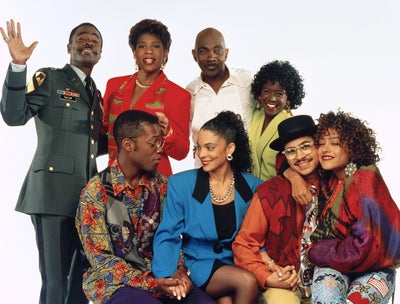 A Different World also taught me about consent. In Season 2’s episode “No Means No,” Freddie Brooks, played by Cree Summer, goes on a date with a star baseball player, who attempts to assault her. This episode cuts away the false narrative that women play hard to get in hopes of not coming off a certain way, but in reality, want a man to “take it.” But no really does mean no. A lot of times, survivors of rape and sexual assault do not always feel that they can report their assault, and sometimes believe that if they consented to some of the things, including the date itself, then the assault was their fault. I learned in the episode that I have the right to say no at whatever moment I don’t want to continue with whatever is happening and that it’s okay. I also learned the biggest lesson of them all, which is that men should be held accountable if they violate my consent, because no means no!

The series also gave me lessons about safe sex being the best sex. I’ll never forget the “Letti Stay Ready Date Pack” and because of it, I kept a stash of condoms always handy in my college dorm room. I was not trying to end up like Kimberly Reese in Season 2, episode 11, when she had a pregnancy scare and was terrified at the thought of possibly having to tell her parents. In that same episode, I also learned about abortions for the first time. Unfortunately, due to Roe v. Wade being overturned, abortions are harder to come by in the present-day, but Kim’s ordeal demonstrated how hard reproductive decision-making can be, and the stress of becoming pregnant when you’re not ready.

Lastly, I learned from watching A Different World that it’s okay to wait. Even though I didn’t do so, I received the message that it was okay if I decided I wanted to. Despite everyone else on the show having sex, Whitley and Dwayne didn’t do so until they were engaged. And then there was the episode with Lena James, played by Jada Pinkett Smith, and boyfriend Dorian, the star basketball player. Even though he was an athlete and very easy on the eyes, his character was saving himself for marriage and was proud about it. The series showed me that sex should not be the most important aspect of a relationship, and if I am refraining from sex, it is equally important that my partner respects my wishes.

It’s pretty obvious that A Different World was truly ahead of its time. Three and a half decades after its initial debut on NBC, it’s still a beloved program. In addition to being entertaining, the life lessons taught and groundbreaking issues covered, educating the audience, have helped it to remain relevant. The messages shared are just as important today as they were then.