Wimbledon will welcome capacity crowds from TOMORROW with 15,000 packing Centre Court, the first full house in a UK stadium since lockdowns began

Wimbledon will welcome capacity crowds on its two biggest courts for the quarter-finals, semi-finals and finals from tomorrow, with 15,000 spectators packing Centre Court in what will be the first time outdoor stadiums to be at full capacity at a sporting event since the start of the pandemic.

Attendances have been capped at 50 per cent since the start of the British grand slam last Monday although next weekend’s finals are to rise to 100 per cent on the 15,000-capacity Centre Court.

After a successful opening week, the Championships have now been given permission to operate at full capacity from Tuesday’s women’s quarter-finals onwards on Centre Court and No1 Court.

Wimbledon is part of the Government’s Events Research Programme, with spectators not required to wear masks while seated in the stadiums. It will mark the first time outdoor stadiums will be at full capacity at a sporting event in Britain since the first lockdown in March 2020.

A statement from Wimbledon read: ‘Following the successful staging of the first week of The Championships, as agreed with the Government’s Events Research Programme and in consultation with our Local Authority in Merton, the AELTC is pleased to confirm that Centre and No1 Court will feature 100 per cent capacity crowds for the quarter-finals, semi-finals and finals. 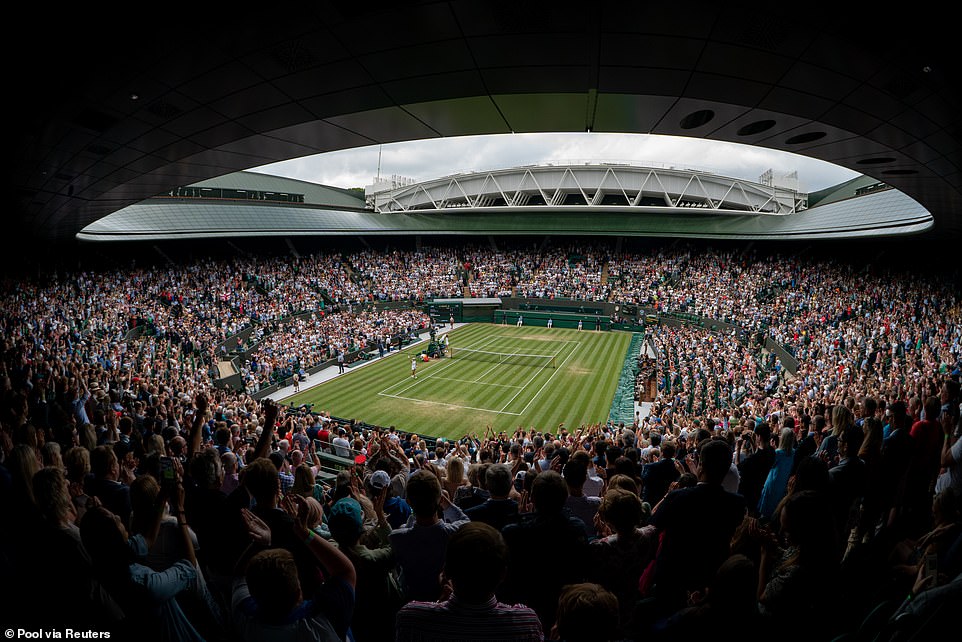 Wimbledon will welcome capacity crowds on its two biggest courts for the quarter-finals, semi-finals and finals tomorrow, with 15,000 spectators packing Centre Court in what will be the first time outdoor stadiums will be at full capacity at a sporting event since the start of the pandemic 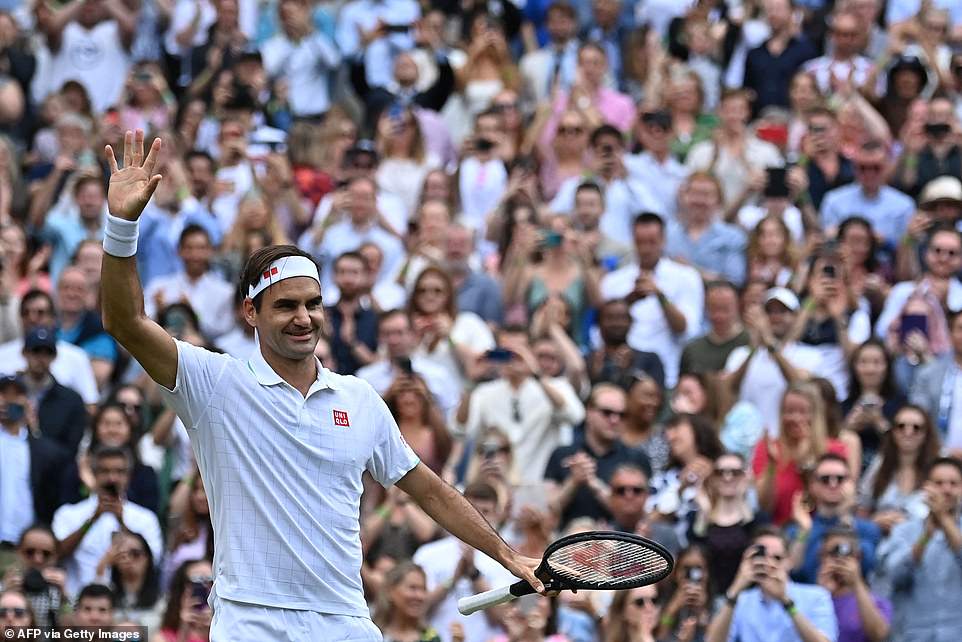 Switzerland’s Roger Federer celebrates his victory over Britain’s Cameron Norrie during their men’s singles third round match on the sixth day of the 2021 Wimbledon Championships at The All England Tennis Club in Wimbledon on July 3, 2021 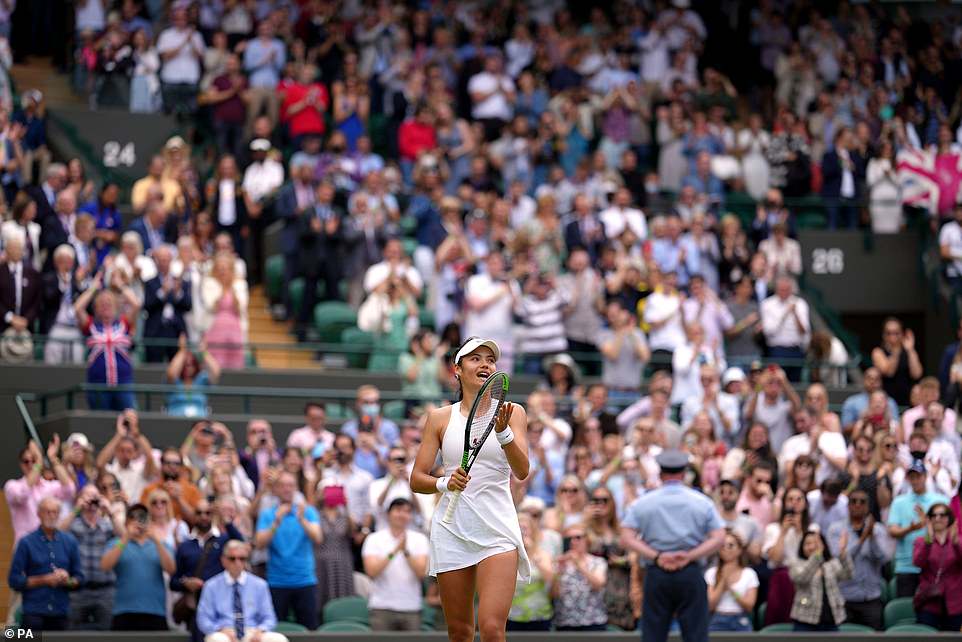 ‘This marks the first full outdoor stadiums at a sporting event in the UK since the pandemic began. Capacity across the rest of the grounds will be reduced according to the number of courts in play.

‘Ticket-holders will continue to be required to show proof of their Covid status on arrival, and are asked to observe the guidance around wearing face coverings on the move and supporting any additional mitigation measures in place.’

Spectators must either be fully vaccinated, have proof of a negative test or natural immunity through a recent infection.

The second week of Wimbledon is upon us and aside from Emma Raducanu mania sweeping across the country, there are a number of other intriguing fourth-round stories to keep an eye on.

Roger Federer has a ninth title at SW19 title in his sights, Karolina Pliskova faces the conqueror of Sloane Stephens and 20-year-olds Felix Auger-Aliassime and Sebastian Korda aim to reach personal uncharted territory at a Grand Slam. 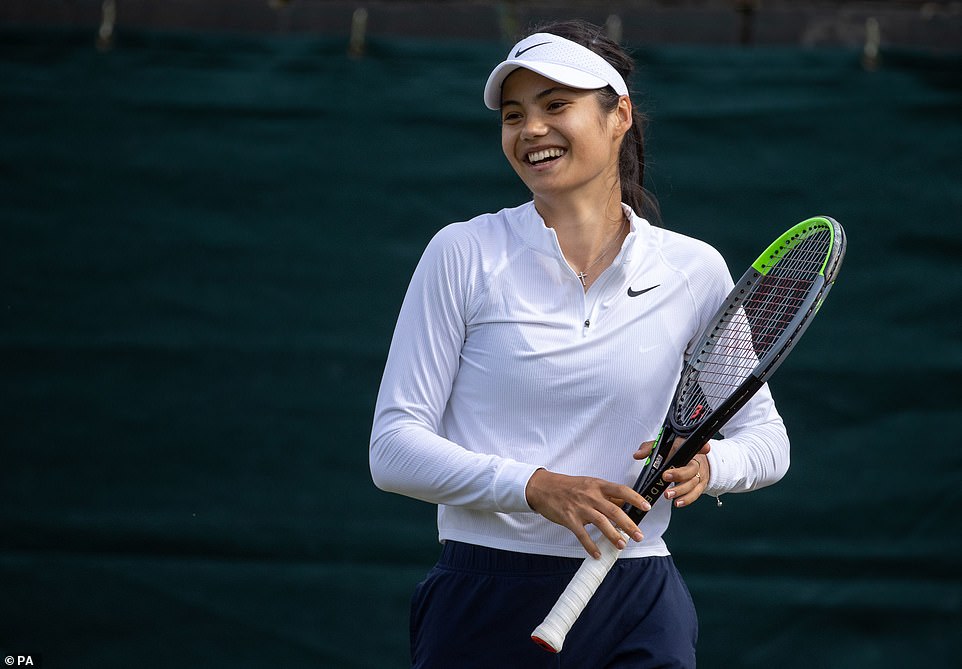 Emma Raducanu at a practice session on the Aorangi Practice Courts on Middle Sunday of Wimbledon at The All England Lawn Tennis and Croquet Club, Wimbledon 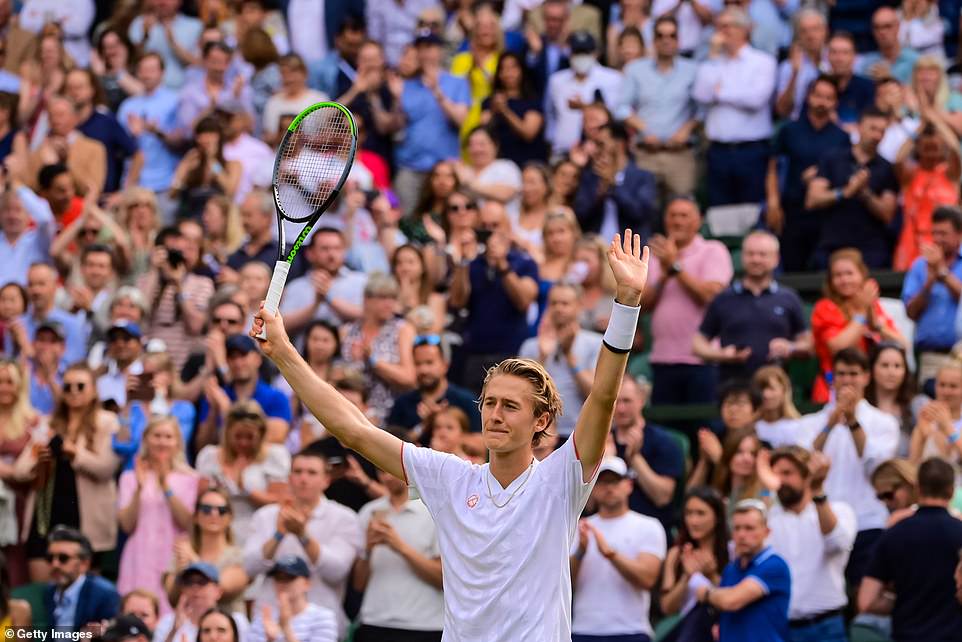 Korda, with the genes of a gifted family, has been in astonishing form at his first Wimbledon.

He has reached the fourth round for the loss of only two sets and has already accounted for a pair of seeds, including Britain’s Dan Evans.

Khachanov is having his best run at Wimbledon but faces a dangerous, unseeded opponent. 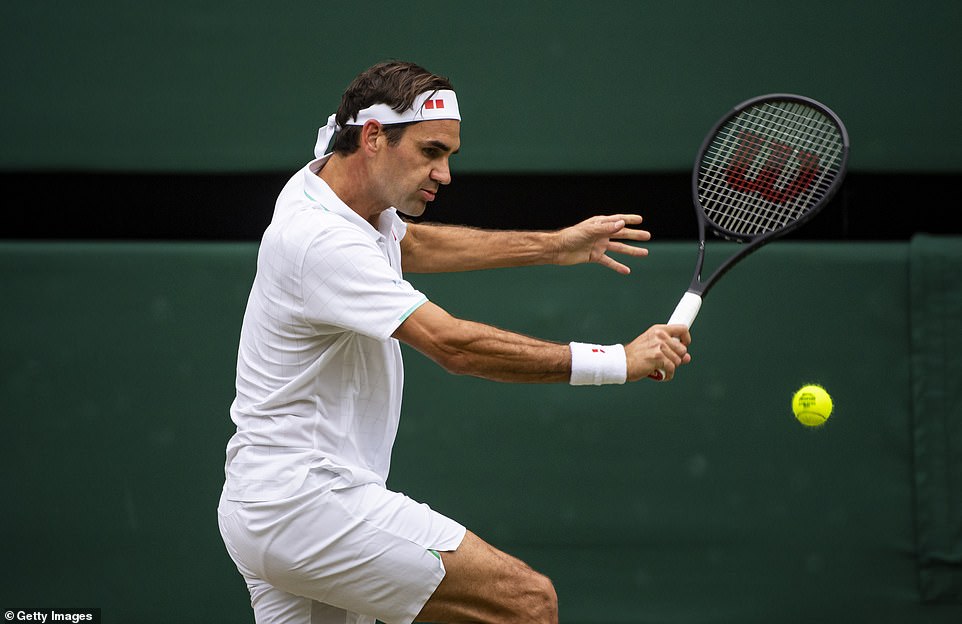 Federer turns 40 next month so all opportunities should be taken to watch him.

But he got a little lucky when Adrian Mannarino retired hurt going into the fifth set of their first-round match — and he was also pushed hard by Cam Norrie. Clearly not the force of old but still moves brilliantly on a grass court.

Zverev has the talent to do damage on any surface and is finally sharpening up on grass by equalling his 2017 best run.

He faces a strong, young opponent who plays well on grass, but benefited from Nick Kyrgios’ injury in the previous round. 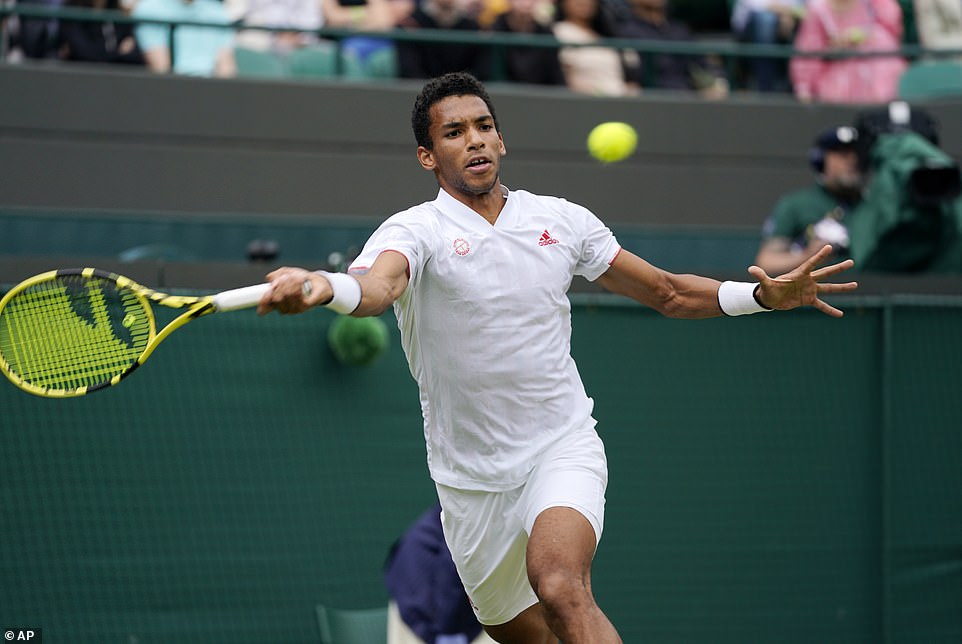 Few players, men or women, hit a tennis ball as hard as No 2 seed Sabalenka.

It is a high-risk style of play, however, so the Belarusian, known as ‘The Tiger’ after her impressive arm tattoo, might need more caution against a Moscow-born opponent, who plays under the Kazakhstan flag.

Rybakina is also a big hitter, so Court Three spectators can expect some high-intensity tennis. 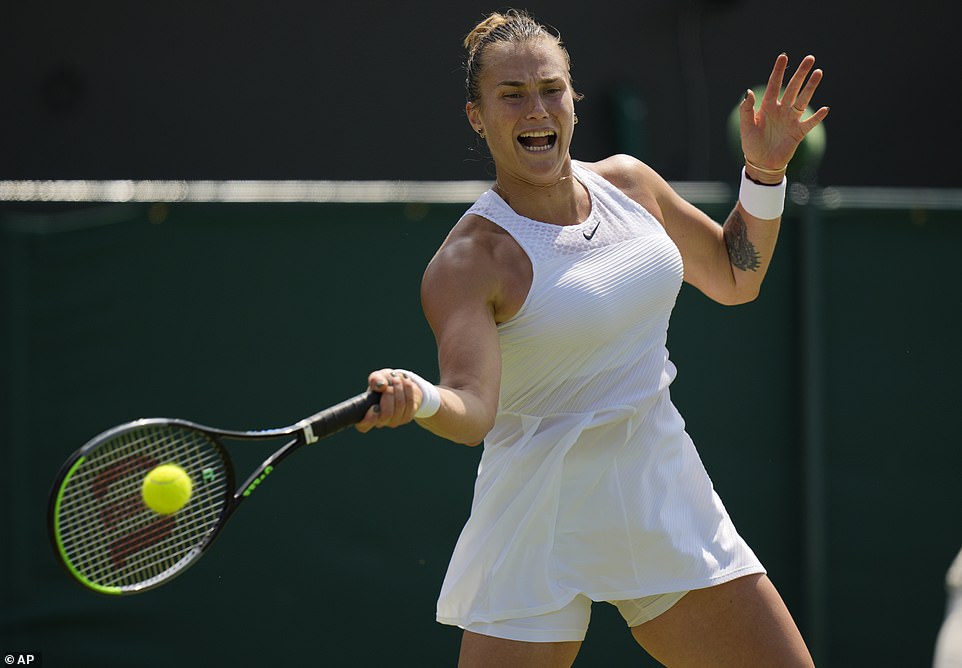 Pliskova is one of the more familiar Czech stars as she prepares for her third consecutive appearance in the fourth round of the women’s singles.

The No 8 seed will start as favourite, but an upset can’t be ruled out in her first-ever match against Samsonova.

The Russian is enjoying a breakthrough season having won the recent Berlin tournament as a qualifier. Her debut run here has justified the world No 65’s wildcard entry.

Tipped as a potential champion here, Keys was a quarter-finalist in 2015. Now 26 and out of the world’s top 20, the American is happy to be on the grass again.

She said: ‘My game suits the surface and I have felt more comfortable this year. I think that’s shown in my tennis.’

Swiss ace Golubic has never been this far in a slam but is establishing a reputation as an expert in breaking serve. 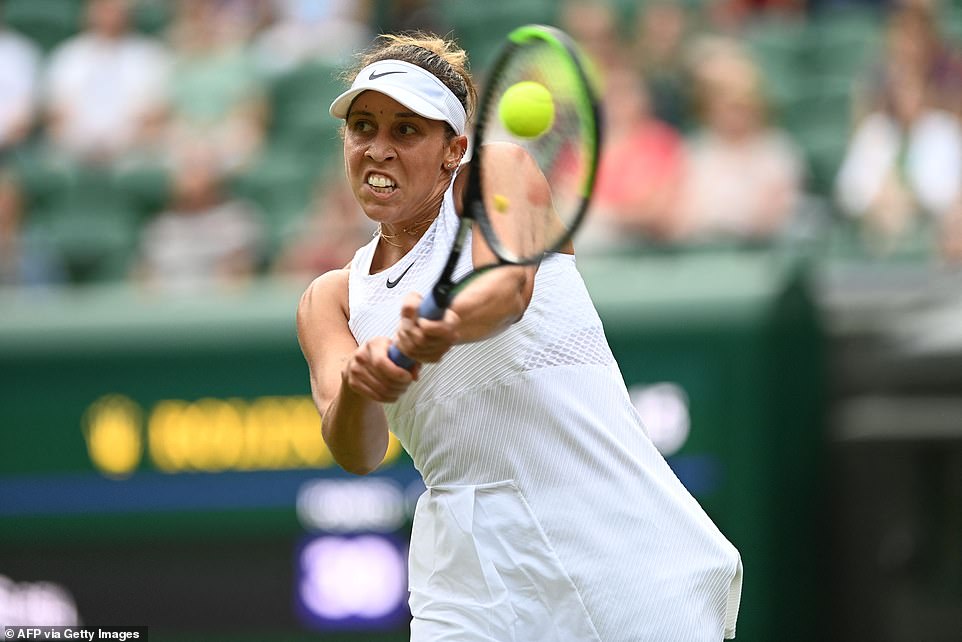