Some television programs are a reflection of the world they are created in, and some are a reaction to it. Zoey's Extraordinary Playlist, an absurdly whimsical comedy about a young computer coder who discovers the power of reading other people's minds via the songs being replayed in their heads, is very much the latter.

"People are looking for joy and hope in the world right now," the show's creator Austin Winsberg says. "And I think that musicals can touch upon deep emotions and can bring about stuff that's sometimes hard to say in words. There has also been a lot of success in the last several years with big-screen musicals; I think people are just drawn to stuff that feels escapist, hopeful and fun, and I think music is a great way to make that happen." 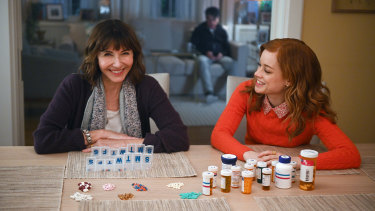 The series pilot introduces the audience to Zoey (Jane Levy), a young woman grappling with the possibility of a promotion at work, and the fact that her father, Mitch (Peter Gallagher), is slowly dying from a rare neurological disease, Progressive Supranuclear Palsy (PSP), which has left him unable to speak.

Fearing she may develop the same symptoms, the timid and anti-social Zoey agrees to undergo an MRI scan but emerges – thanks to an earthquake during the scan – with the unexpected ability to read other people's minds, albeit in the form of rather elaborate song and dance numbers.

"It was important early on in the show to show that this was a character that was not very in touch with the world," Winsberg says. "Part of why we made her a computer coder was because we wanted to make her somebody that saw the world in very binary terms. There were a lot of zeros and ones, hiding behind a computer. 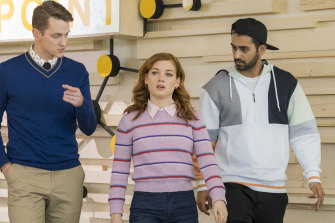 "One of the early conceits was that this shouldn't be somebody who is connected to popular music, [or] connected to pop culture, because part of her journey and her growth and arc over the course of the show is living outside of black and white and starting to see these shades of gray," he says.

Her new power also means she is able to reconnect with her uncommunicative father: within the framework of Zoey's new ability, her dad Mitch is able to express himself in song. That story element has particular poignancy for Winsberg, whose father died from a degenerative neurological disease in 2011.

"For the first few months that my dad had it we didn't know what was going on, and then after about three months he got diagnosed with [PSP] and within the span of nine months after that he was gone," Winsberg says. "So it was all under the span of a year and for the last six months he was very much in the state that Peter is in the show.

"We didn't know what he was processing, he would show us moments and we felt like the brain was still working, but the body was betraying him," Winsberg adds. "Every single thing that Peter goes through over the course of the season are things that happened in my house."

It came from wanting to see my dad sing and dance and see my parents dance again.

When people ask him, why a musical?, Winsberg says it was simply because he often asked himself, "what if we could see what was going on in my dad's head during that time? And because I have a musical background, it all was about that idea of, what if he could see the world as a musical? It came from wanting to see my dad sing and dance and see my parents dance again."

Given the costly nature of music rights clearances for television, Zoey's Extraordinary Playlist is also an unexpectedly expensive show. "Our studio network partners have been very generous with the budget for the music," Winsberg says.

"But it's also a chicken and egg thing," he adds. "Sometimes I will hear a song and say, that's a perfect song. Other times we will come up with the story first and then it will be, we need a kind of song right here that's a song that's encapsulating jealousy or anger, or an expression of true love."

Winsberg credits the show's music clearance team, but admits he has also been forced on occasion to go knocking on doors, cap in hand, asking for songs. "Our music supervisor will say to me, this is a real long shot, or, this one we're going to have to write a letter," Winsberg says.

"There have been four or five times over the course of the season that I had to write a letter to Paul Simon," he adds, noting that letters also had to be written to Destiny's Child, Beastie Boys and Van Morrison. "Those are the first four off the top of my head," he says.

"A lot of artists aren't prone to giving away their rights like that and in every single case we've gotten the song that we've wanted," Winsberg says. "We haven't had a song all season where they have said no to us."

Zoey's Extraordinary Playlist is on Stan, which is owned by this masthead.