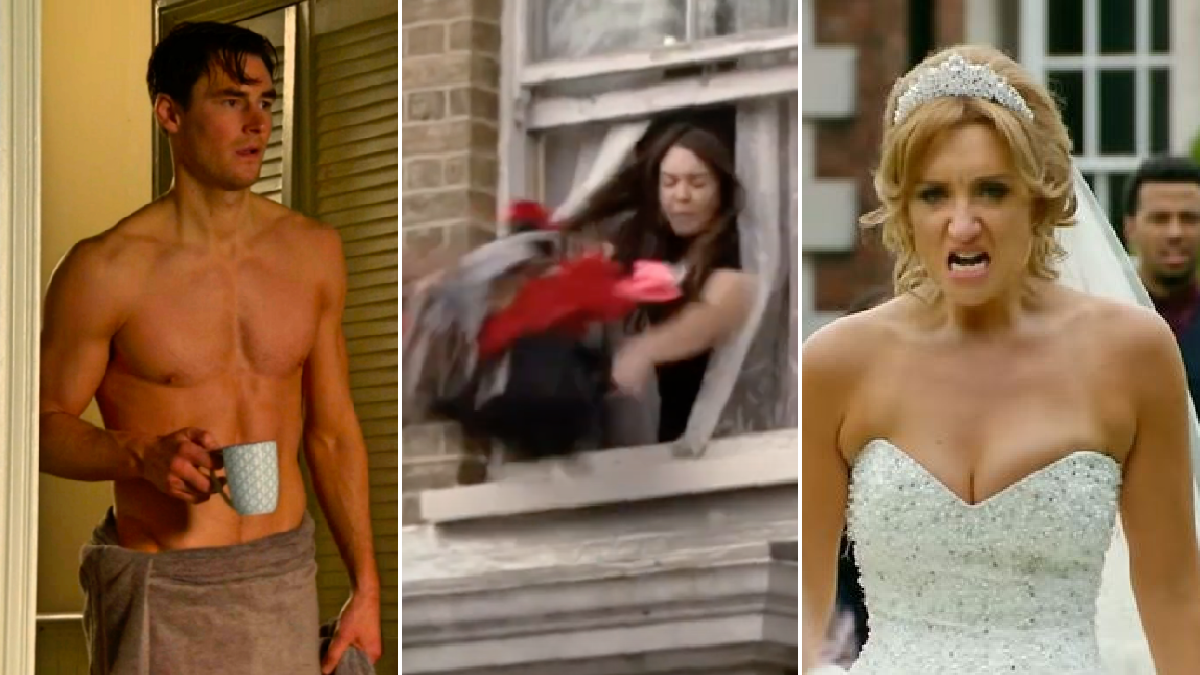 Our beloved soaps may claim to be a representation of the country in which we live, yet have you ever noticed how there are certain things that only ever happen in the likes of Walford or Weatherfield but never in real life?

And, what’s more, they tend to occur time and time again…

How many of the following have you spotted while watching Coronation Street, EastEnders, Emmerdale or Hollyoaks?

Not revealing a serious illness

Why does everyone (yes, Jean on EastEnders, I’m looking at you) decide not to tell their loved ones about the diagnosis of a life-threatening illness? I get the impression that when characters ask what kind of cancer they have, doctors must reply: ‘I’m afraid it’s Secret Cancer. You have to keep it to yourself for at least two months.

And then, if you really have to, confide in just one friend. And, no, you mustn’t tell your partner. At least, not until Christmas Day, by which point you’re free to break down in tears over the meal table. Do come back and see me if you have any questions. Next!’

Hunk in a towel for no reason

Any new male arrival with the merest hint of an abdominal muscle has to be objectified within a week of arriving. The best way to achieve the desired effect is to have them walk through a communal living area after having a shower wearing nothing but a towel.

This happened most recently with Zack on EastEnders, who paraded around semi-starkers for no legitimate reason. But the danger is that towel-wearing can become a hunk’s primary plotline.

For years, all Jason on Corrie did was appear in the living room with his pecs out saying, ‘Mam, where’s the iron? I need to wear this shirt!’

Jinxing your own happiness

Soap characters constantly tempt fate in a way that beggars belief. You’d have thought they’d be a bit more circumspect knowing how danger and disaster are a constant threat in any community. But, no. Instead, they’re forever saying things like, ‘I’ve never been so happy’ or ‘This is going to be the best Christmas ever’ or ‘I just want everything to be perfect’.

Whenever anyone is so naively optimistic, you just know that their child is then going be murdered or a bridal frock will end up covered in pig swill or that a Christmas dinner will descend into a food fight. Has no one ever heard of foreshadowing?

Pack up your troubles in five minutes flat

Anyone who’s moved house knows what a laborious job it is to store possessions, organise transport, issue change-of-address details and give final meter readings. But, somehow, a departing resident in soapland never has to face such onerous, mundane tasks.

Rather, they’ll announce they’re leaving, fit everything they own into a single rucksack and then drive off into the sunset before the credits roll. Luke on Emmerdale managed to do this very recently after his character was suddenly turned from a guy struggling with his sexuality into a conniving catfisher who was covering up his complicity in his own brother’s untimely death. His only option? To exit within the space of a single half-hour episode.

‘And you can take all this stuff and do one!’ Never mess with a woman scorned – a lesson that many a feckless soap fella has yet to learn. Mind you, if the guys would only wise up, we might be spared the cliched sight of a rumbled romeo standing on the pavement while his other half chucks clothes at him from an upstairs window. Has anyone ever seen this kind of spectacle in reality? I thought not. Variations on this are, of course, the cutting of the crotch from a pair of suit trousers, the surprise changing of the locks and the flogging of a love cheat’s prized record collection to his neighbours.

Finally, there needs to be an outright ban on certain phrases that only exist on soap scripts and never in everyday conversation. I don’t want to hear anyone else described as having ‘a face like a slapped backside’ or ‘a bulldog chewing a wasp’.

Can we also not have two people clandestinely discussing a secret, only for the person who they’re gossiping about to appear from around a corner and say, ‘what secret?’. Hard men should be halted from uttering, ‘You don’t know what I’m capable of.’ The same goes for ‘this isn’t over’ being issued as a threat. It’s a soap – we know things are never over. That’s a given.

Oh, and whenever there’s a break-up, can people stop shouting, ‘It’s over and I don’t ever want to see you again’? The same two people then just end up having a lengthy heart to heart in the very next episode, so why bother saying it in the first place?