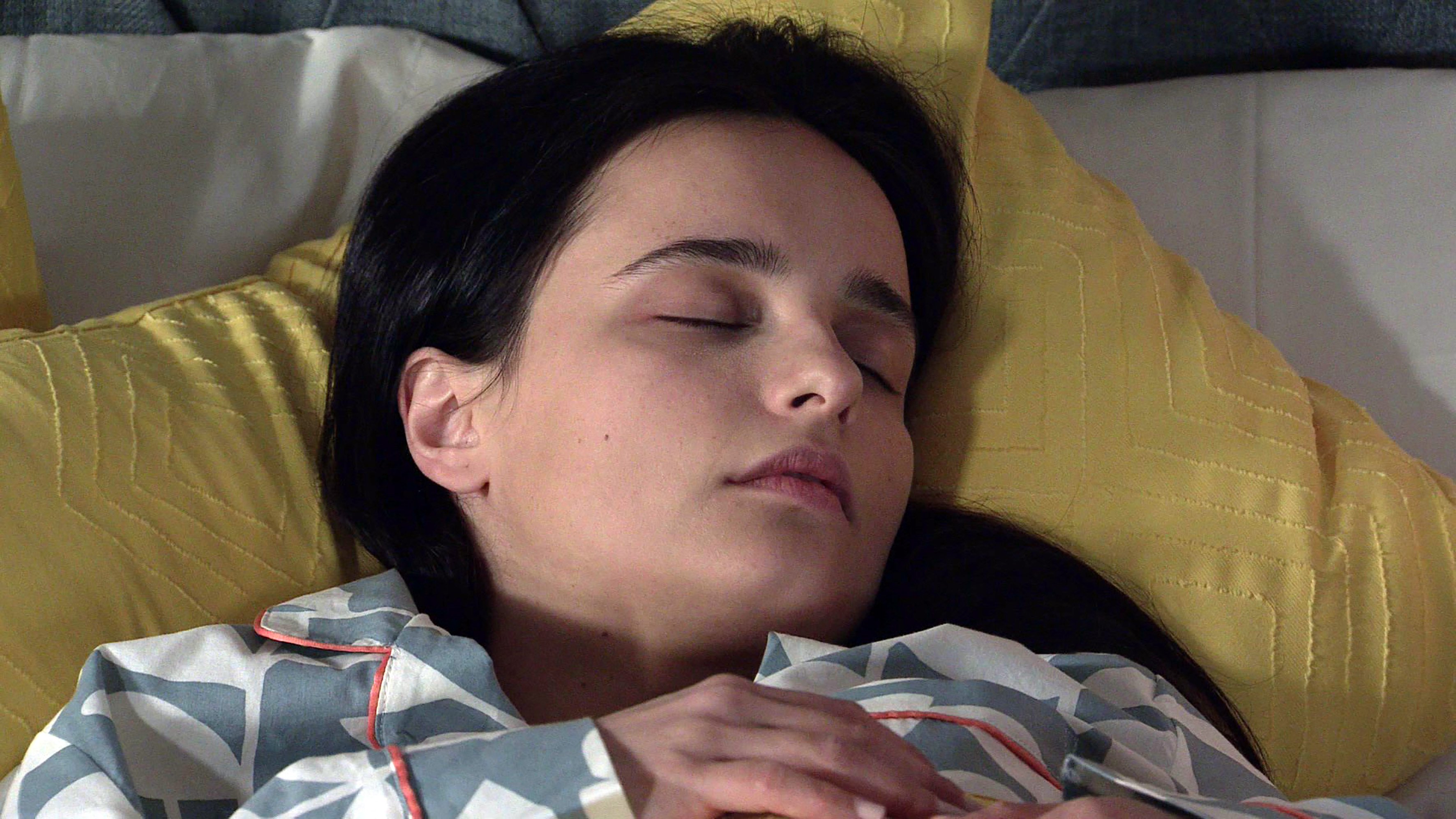 The flames of hatred and love are sparking all over Coronation Street. As Alina Pop and her unborn baby are left to burn in a fire by young Hope, Aadi Alahan is hoping to ignite a romance with Summer Spellman.

This week in Coronation Street

Despite Tyrone’s attempts to make Hope feel included in the plans for the baby, she feels abandoned when he starts planning drinks to celebrate the pregnancy and then rushes off to the hospital with Alina, who has suffered some stomach pains.

At the hospital, the sonographer confirms that the baby is fine. Having collected Hope on their way, Tyrone and Alina return home.

Hope presents Alina with the toy dinosaur for the baby. Alina’s delighted. But as Tyrone and Alina excitedly discuss the fact they’re having a boy, Hope stares at the dinosaur with mounting fury. When Fiz collects her, she steals Alina’s keys.

Sergeant Mitchell calls at Number 3 and explains she has come about James’s complaint. She reveals that they’ve considered the complaint but won’t be taking the matter any further. Michael and James are left disappointed and frustrated.

As James works out in Victoria Garden, he spots Craig and asks him if he reported the fact that he wasn’t driving erratically and there was no need to pull him over. Craig becomes flustered.

In the café, George tells Eileen that Todd spent last night kipping in the funeral parlour and she ought to cut him a bit of slack. Eileen’s torn.

After a Zoom call with Sarah, a puzzled Izzy confides in Fergus that it would seem that the order she’s currently working on is already out for delivery which makes no sense.

Admitting she’s tired, Alina persuades Tyrone that he should attend the drinks he has arranged at the hotel with his friends and leave her to have an early night.

When Hope declares that she wants nothing to do with the new baby and hopes he’s never born, Fiz is shocked and orders her up to bed. Hope sneaks out of the back door and lets herself into the salon flat to retrieve her dinosaur, believing Alina to be out at the drinks. She lets herself back into Number 9 and Fiz is oblivious.

Back at the flat, Alina sleeps soundly as smoke starts to creep under her bedroom floor. On the street, Eileen and Sally are horrified to realise the salon flat is on fire.

Having taken a call from Evelyn, a shocked Tyrone tells Kirk they need to get home. Fiz, Evelyn, Sally and Eileen stand back as Alina is loaded into the ambulance. Tyrone arrives and climbs in with her. Hope watches from her bedroom window – was the fire anything to do with her?

With his disappointment evident, James tells Craig that all he had to do was provide the truth but he let him down. Craig feels wretched. In the police station, Craig questions PC Brody about his handling of James’s arrest, but when PC Brody suggests that Black people are just over sensitive, Craig’s horrified.

Robert, the County Manager, calls at Number 3. When James realises Robert is pleased it isn’t going any further, he reaches a decision and tells Michael he refuses to give up and he’s going to appeal.

A dejected Todd scours the rental property pages and admits to George that it’s all out of his price bracket as he’s still paying Billy back for the stolen heat pump. When Todd reveals that he still hasn’t found anywhere to stay, George insists he comes home with him.

Izzy calls Sarah and Carla and accuses them of lying to her. When Carla admits that they were just trying to protect her, a tearful Izzy kills the call. Sarah and Carla bicker over Izzy, each blaming the other for upsetting her.

When Aadi reveals how much he’d miss her if something happened to her, Summer admits she feels the same about him. Clearly flustered, Aadi heads out leaving Summer confused.

Shaken after her ordeal, Alina sits up in her hospital bed and assures Tyrone that both she and the baby are fine. In the café, Tyrone, Fiz and Evelyn discuss the fire and the possible causes. Hope is quick to point out that Alina was alone in the flat so the fire must be her fault.

Outside the salon flat, the fire investigation officer tells Tyrone that it would seem the fire was started by an aromatherapy candle. Alina’s horrified to think that she caused the fire with one of her candles.

George finds Eileen in the café, and after admitting he’s taken a shine to her, wonders if she fancies dinner at the Bistro. Eileen coyly accepts his offer. But when George overhears her tell Mary that she isn’t sure she wants to go out without someone who handles the dead for a living, George sends a text cancelling the date.

Sally, Kirk and Beth fret about Izzy. Sarah resolves to try and put things right. Carla and Sarah bury the hatchet and call Izzy to apologise.

When Evelyn and Hope clock Craig talking to the fire investigation officer, Hope questions whether the person who started the fire will get into trouble.

Evelyn’s suspicions grow and she suggests to Fiz that Hope might know more about the fire than she’s letting on. Fiz is shocked and immediately leaps to Hope’s defence.

At the salon flat, Alina’s sadness is evident as she realises all the things they’d bought for the baby have been destroyed. Having gone over the fire officer’s findings in her mind, Alina tells Tyrone that in order for the fire to have started in the cot, someone must have moved the candle.

A furious Eileen lambasts George for cancelling their date. But when George reveals that he overheard her telling Mary that he makes her skin crawl, Eileen’s mortified.

Mary hatches a plan to get them back together prompting George to suggest to Eileen that they try again. How will she respond?

Aadi confides in Dev that there’s a girl he fancies. Dev urges him to pluck up the courage and tell her how he feels. When Aadi confides in Amy that he wants to ask Summer out but doesn’t know how, Amy’s thrilled and offers to coach him.

Tracy returns home to find Amy and Aadi clearly enjoying each other’s company. When Tracy suggests Aadi is her boyfriend, Amy puts her straight but Tracy’s not convinced.

Izzy finally opens up to Carla and Sarah and describes the pain, fear and loneliness she suffered during the pandemic. Fergus hugs her and Izzy gives him a grateful smile.

Peter tells Carla that he sees his new liver as a new beginning and fancies a change of career.

Fed up with the parking chaos on the street, Shona produces some homemade parking tickets. When Todd dumps the hearse outside Number 8, Shona slaps one on the windscreen. Todd tells her she is committing fraud and is annoyed to find the hearse covered in shaving foam.

Later, Sarah returns the invoice to Todd and suggests he starts building bridges with the neighbours rather than winding them up.

Alina and Tyrone try to make sense of the fire and are stunned to find out from the police that an accelerant was used to start the fire and it is being investigated as arson.

Realising her keys are gone, Alina says someone must have let themselves in. Bemused by how shaken Fiz is by the turn of events, Tyrone quizzes her about the missing keys. Fiz tells Hope they need to talk about the fire.

As Tyrone and Fiz try to work out how to deal with Hope, Alina is telling Craig that she thinks Fiz started the fire.

Will Tyrone tell the police they think Hope started the fire?

As Amy chats to Aadi outside the shop, Tracy watches, convinced they’re an item. Aadi calls round to see Summer and finally plucks up the courage to ask her out. When Summer agrees and suggests they plan a first date, Aadi’s thrilled.

Tracy is horrified to find Dev putting together a ‘date hamper’ for Aadi and his new girlfriend and reveals that the new girlfriend is Amy, Dev’s stunned.

Later, Tracy and Dev collude to keep the secret of Aadi and Amy’s relationship from Steve. But when Steve finds a text from Dev to Tracy he gets the wrong end of the stick about the pair, forcing Tracy to tell him about Amy and Aadi.

Aadi, Summer and Amy round the corner to see Steve launching an attack on Dev for encouraging his son to have sex with Amy.

Lauren, the witness liaison officer, calls at the café for a meeting with Nina. Nina crumbles at the thought of having to relive her terrible ordeal. When Billy mentions a memorial veg plot left by one of his parishioners, Nina’s taken with the idea and suggests to Roy they could do the same for Seb.

When Ed offers Nina the land next to his builder’s yard for Seb’s memorial garden, she’s deeply touched by his generosity.