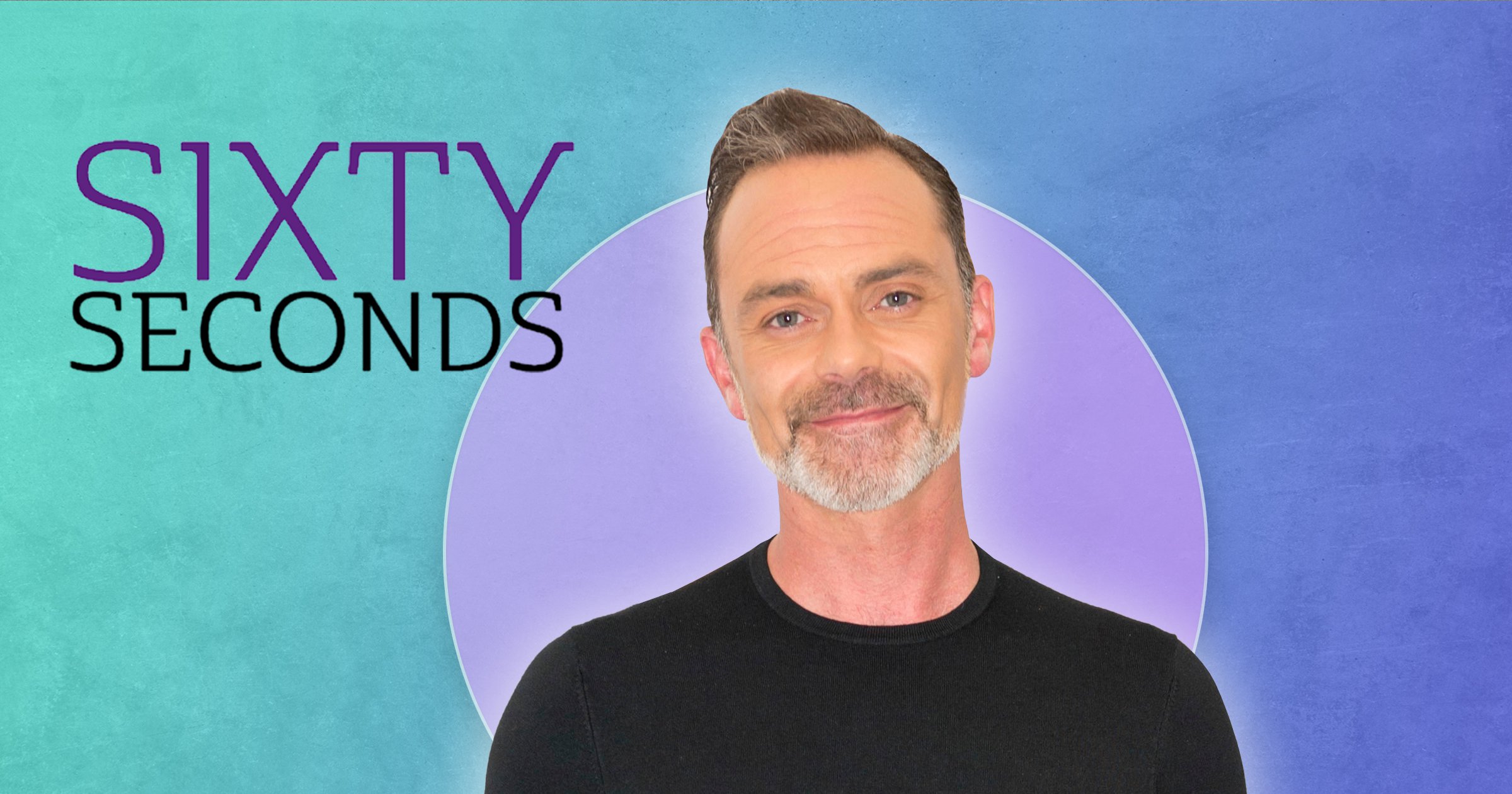 The Corrie actor, 41, on how his dogs kept him sane during lockdown and why he loves playing gay vicar Billy Mayhew.

What was it like meeting the Queen when she visited the cobbles this month?

For the first time in my life I was tongue-tied. It was hard not to swear but I managed it!

She visited the cobbles and also the Rovers Return. We were all lined up and very eager.

We’d been told there was a royal visit but we didn’t know it was Her Majesty herself until we were all there.

The brief was smart casual so I wore jeans, a T-shirt and blazer. To be perfectly honest, with the lockdown weight gain, I don’t think I could fit into any of my bloody suits anyway!

Why have you stayed at Coronation Street for seven years?

I’m so incredibly happy there that I skip into work. Well, not literally skip – that would look weird! But I love it.

For the first 20-odd years of my career I was travelling a lot and always away on jobs. Being at Corrie means I’ve been able to put down some roots.

I’ve been on telly since I was 14 but this is the first time I’ve been able to wake
up in my own bed, shower in my own bathroom and get my pants out of a
drawer rather than an overnight bag.

Your character, Billy, recently got engaged. Did people think it was you, though, when you said on Instagram, ‘He’s put a ring on it…’?

It was unbelievable. I tagged Corrie in the comments so I didn’t actually think for a second that people would think it was me, especially as I’m always bleating on about being bloody single!

I had to put out a story saying it was the character, not me.

So you’re not as lucky in love off-screen, then…

It’s been impossible for me to meet anyone during lockdown with all the bloody rules and regulations. I live alone.

When you were allowed to go out for a drink you could only meet people that you live with – well, that’s me and the dogs, who I see at home anyway.

Is it important for Corrie to feature a character like Billy?

When I was growing up there were very few positive gay role models, they were always very camp, effeminate men.

It is very different for the generation growing up now. Having a character like
Billy in the show provides an opportunity to give people a different point of view.

Did you find lockdown tough?

I’ve got two dogs. They kept me sane. I would have gone utterly nuts without a bit of company and another heartbeat in the house.

I’ve got a little garden and I’m very fortunate that I live in quite a green area, surrounded by fields, but it was a horrible time.

The news was doom and gloom. I’ve not watched it now since June last year.

How did you stay in touch with your cast friends?

Thank God for the internet and being able to video call people. I opened a digital bar during the first lockdown called Dan’s Bar with Sue Cleaver [Eileen Grimshaw in Corrie] and Julia Goulding [Shona Platt] as a way of ensuring that we didn’t have to have dinner on our own.

And then we started theming the nights – a toga night, a black-tie evening and
a summer holidays theme.

Sometimes we’d only be on the phone for an hour, other nights till 4am.

Before Corrie you were in films with some very big stars…

It was brilliant, it gave me a wonderful foundation.

The majority of the people I worked with at that age, such as Judi Dench and Meryl Streep, were so nice
and so unstarry that it gave me a really good grounding of how you should
behave in this industry.

Is Corrie your first soap?

It’s actually my fifth. In Emmerdale I was a bisexual Geordie bin man and in
EastEnders I played someone connected to the Mitchells – they thought I was
Billy Mitchell’s long-lost son.

I also did a soap in Ireland called Fair City and I’ve done a few guest episodes of Doctors.

What’s coming up next?

Todd Grimshaw is caught on camera revealing the lengths he went to in order
to split up Billy and his ex, Paul. Billy is devastated and embarrassed.

He’s very trusting and he always tries to find the good in everyone. He and Todd are engaged and he can’t believe Todd would do this to him.

Has it been hard filming with all the pandemic restrictions?

We shot at a two-metre distance, wearing masks the whole time inside the
studios.

We only took them off for filming – we had to wear them for rehearsals,
which made things very difficult because 50% of my job is reaction.

If I can’t see what somebody’s face is doing, I’m guessing at what I’m reacting to.

What hobbies do you enjoy?

I play the piano and sing. I do that daily. I trained in musical theatre, although
I’ve never worked in it.

I’m quite social so I like to see my family and friends a lot, I enjoy the odd pub visit and I like going out with the dogs.

How to get your Metro newspaper fix

Metro newspaper is still available for you to pick up every weekday morning or you can download our app for all your favourite news, features, puzzles… and the exclusive evening edition!