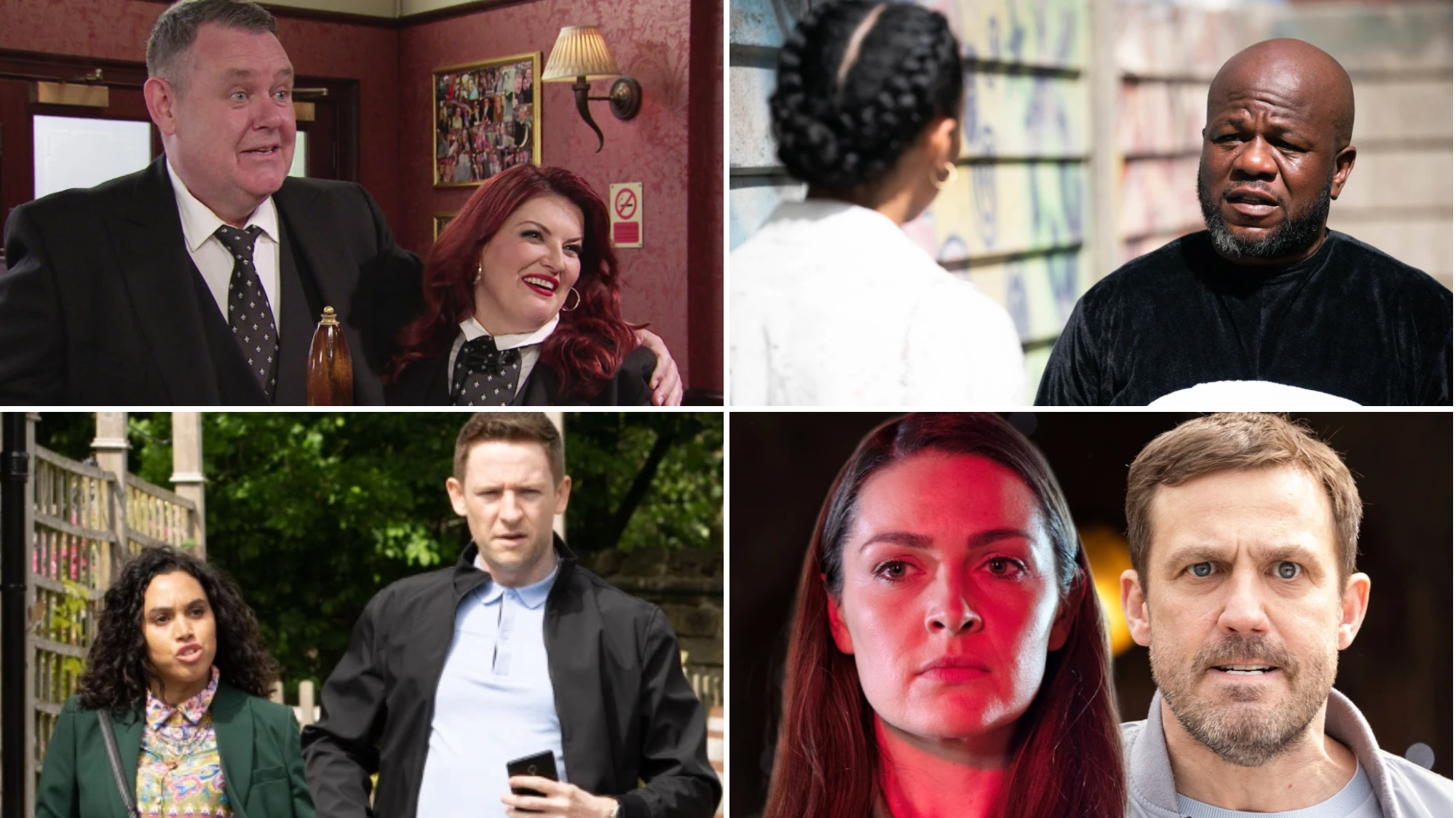 Another week packed full of drama awaits in soapland, and just wait until you find out what’s in store.

Suzy Merton is on a mission in Emmerdale, though she could soon find herself in trouble with the law for a crime she didn’t commit, while Hollyoaks’ Sienna Blake had better watch out.

Why? Well, a ghost from the past is back to haunt her.

It’s all kicking off next week, and as ever, we’ve got all the spoilers you need to tide you over until then.

1. Debbie instructs Ryan to stage a break-in at the bistro so she can make a claim on the insurance. He fuses the electrics, and later assures Debbie that the cash is stashed in his bedroom. Later, Leanne is horrified to discover all the money gone. Debbie orders Ryan to call the police.

2. Craig questions Debbie, Leanne, Nick, and Ryan about the break-in. Ed reveals that the CCTV has a back-up circuit and won’t have been affected by the power cut. Leanne, Nick, Debbie and Ronnie later watch the footage back, and they discover that Ryan is the perpetrator. Ryan is arrested on suspicion of theft.

4. Ken approaches Wendy and invites her for a coffee. At No.1, Ken invites Wendy to share his lasagne and tells her he knows what it’s like to be lonely as he still misses Deirdre.

5. Aaron tells Summer that he’d still like to go on holiday but on condition she gets some counselling and deals with her body image issues.

6. Glenda arrives and clocking George asleep in the back of the funeral car, quickly takes charge of the proceedings. As Glenda, Todd and Sean celebrate how well the funeral went, George arrives.  He’s thrilled to see his sister and introduces Glenda to Eileen.

7. Daniel spends the night at the Rovers, but wakes up at 3.00am and is taken aback to come face to face with Leo, suited and booted. Daniel tells Daisy about how it’s obvious Leo’s hiding something from Jenny.

8. Ben turns to Tez for drugs, but a concerned Sam spots the exchange and tells Ben to pull himself together. Ben heads to a party to find James but as he takes more and more drugs, James sends him home. Realising he’s late for Lexi’s dinner, Ben leaves her an emotional voicemail and says he’s on his way, but he collapses.

9. Kathy, Callum and Jay rush to find Ben and their worst fears come true when they find him with no pulse. The paramedics rush him to hospital but can they save him?

10. Things get worse for Suki when Kheerat announces he’s renting No.41 and he, Vinny and Ash are all moving out. Dotty finds herself caught in the middle but as Suki stoops to a new low to try and convince her children to stay, Dotty awkwardly helps pack up. Tensions simmer and Kheerat has another blow for Suki – he’s buying her out of the businesses.

11. Howie meets with a woman, Delilah, who implores him to tell Kim his secret.

12. Sam is on edge as Phil ignores her calls and she instructs a guilty Zack not to tell anyone about the drugs. Sam warns Jonah the dealing has to stop, but Phil soon confronts her, revealing that he knows all about the drugs!

13. Ravi makes an entrance to the Square and immediately riles Stacey as he flirts with her. As Phil chats with Sharon, he spots Ravi and has an idea.

14. The Taylors recover from the night before but their focus turns to Mia when she’s upset the family can’t afford to take her to a theme park for her birthday. Feeling guilty for losing the money, Finlay comes up with an idea.

15. Leyla is alarmed when Callum turns up at Take A Vow asking her to store drugs in exchange for cash. With Take A Vow’s financial worries growing, Leyla knows she’s crossed a line when she calls Callum to accept his job. The next day, Leyla’s uneasy when Callum turns up with a bag of drugs much larger than she agreed to store.

16. Priya is left gobsmacked when Leyla fires her from Take A Vow.

17. Suzy is stunned to see Callum in the village, and asks him if Leyla’s still taking drugs. Matty, meanwhile, watches from afar, convinced he’s witnessed a drug deal, and later he secretly searches Take A Vow, finding a large holdall of drugs! Determined to make Suzy take responsibility for her actions, he plants the holdall full of drugs in Suzy’s car, and later, he calls the police and reports the drugs.

18. Faith explains to Nate that she plans to take back something that belongs to her from her step daughter’s home, but when a man named Angus – who lives in the house – realises who she is, he kicks her out. Determined to succeed, Faith dresses up in a disguise, and gains entry to Angus’ home, before making off with his stolen bag – much to Cain and Nate’s horror!

19. Dawn is stunned as she finds out who Clemmie’s dad is. It’s Alex! Billy, meanwhile, phones social services and tells them that he and Dawn want custody of Clemmie, much to Dawn’s delight. Alex, however, proves problematic, as he refuses to let them foster Clemmie.

20. Mary opens up about her sexuality to Vanessa but Mary mistakes her kindness for something else and leans in to kiss her.

21. Sienna sets Damon the task of planting evidence that could link Joel to Warren’s vanishing, but he is caught out by Liberty, who demands an explanation. Liberty gets what she’s after, but Damon’s shock confession leaves her at a loss for words, and thus she makes a beeline for Sienna – only to catch her in the middle of dangerous job too! Liberty and Damon resolve to go to the police but, before they can do so, Sienna sees a ghost.

22. Romeo and Prince are all ears when Zain mentions a real-life superhero, who is known to his fans as ‘The King’, who reunites missing people with their families. The King, however, himself proves rather difficult to find, so Romeo enlists Zain’s help in tracking him down, as they throw their impromptu soup kitchen, and a surprise reunion soon follows.

23. John Paul decides to give Lexi a second chance after finding out that she was trying to scare him away from returning to school, but she can’t be as forgiving. Later, he bumps into Nancy and she offers him an olive branch but facing up to all he has done might prove too hard to bear.

24. Zoe has a lot on her plate as she’s still at odds with Felix, and Pearl worries she’s avoiding Sam. Later, a run in with Dave makes her realise how much Sam likes her, but things soon get awkward when she spots a bank transaction that could be new evidence in Maya’s murder investigation.

25. Leela thinks all hope is lost with selling her house, but Grace has a huge proposition for her, and Cindy also has an interesting offer.