Look Inside the Academy Museum, From Rosebud and 'ET' to Studio Ghibli and Midsommar (Photos)

The long-delayed venture will open to the public on Sept. 30 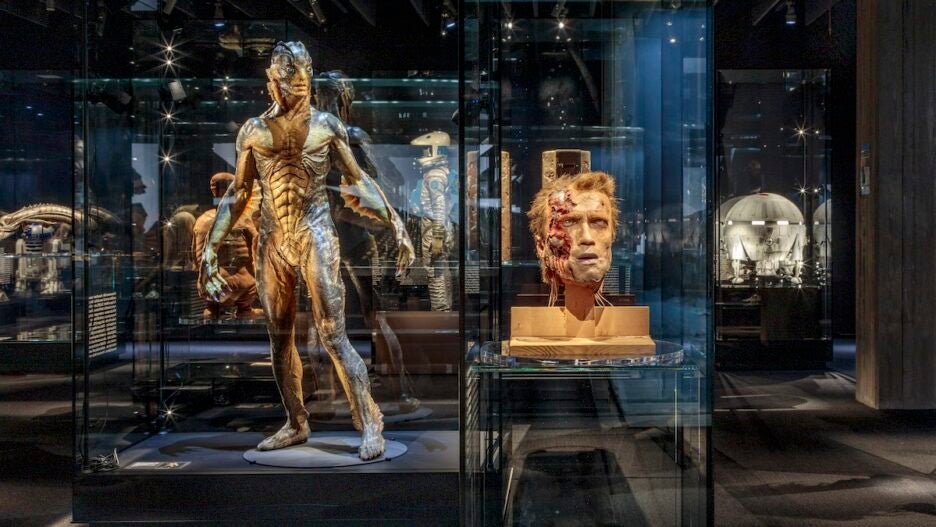 “This museum really has to be the pantheon of such places,” said Tom Hanks when the Academy previewed its Academy Museum of Motion Pictures to the press on Tuesday. The museum, which has been on the fast track since 2011, has suffered delays, cost overruns (the price tag is now close to $500 million) and a pandemic before it will finally open to the public on Sept. 30. But Hanks says it’s ten times better than he imagined it would be, and who are we to argue with him? Here are some looks inside the landmark museum, which sits next to the Los Angeles County Museum of Art in the Miracle Mile section of Los Angeles.

“Don’t call it this the Death Star,” architect Renzo Piano said of the museum’s dome. “Call it a dirigible, or a zeppelin, or a spaceship, or a flying vessel, or, why not, a soap bubble. But this soap bubble will not blow up.”

The museum’s main exhibition, “Stories of Cinema,” begins off the Sidney Poitier Lobby in the Spielberg Family Center, where multiple video screens run through a 13-minute history of cinema

The “Significant Movies & Moviemakers” section begins on an expected note, with a “Citizen Kane” exhibit that includes the young Kane’s sled, Rosebud.

But in an indication of how the museum is devoted to diversity, “Significant Movies & Moviemakers” goes from “Citizen Kane” to Bruce Lee, and from Lee to “Real Women Have Curves,” editor Thelma Schoonmaker and cinematographer Emmanuel Lubezki, among others.

A section devoted to the Oscars begins with a room sporting 20 Oscar landmark statuettes, from the cinematography award for “Sunrise” in 1929 to Barry Jenkins’ screenplay Oscar for “Moonlight.” But one niche is missing its award, because the plaque that Hattie McDaniel received for 1939’s “Gone With the Wind” has disappeared. (Back then, supporting actors and actresses received plaques, not Oscar statuettes.)

Spike Lee has curated a room of his inspirations, which range from a Jackie Robinson baseball jersey to John Coltrane’s “A Love Supreme” album to E.U.’s 1988 hit “Da Butt.”

The museum devotes an extensive section to “The Wizard of Oz,” including the Cowardly Lion’s wig, the Wicked Witch’s hat, Dorothy’s dress and, of course, the ruby slippers.

The costume display runs into one on makeup, which includes life masks of, left to right, Grace Kelly, Clark Gable, Mel Brooks and Don Cheadle.

And next to the life masks are some of the most recent artifacts: wigs worn by Eddie Murphy for “Dolemite Is My Name.”

The “Inventing Worlds and Characters” animation gallery includes sketches, work tools and maquettes from “Frozen” and “Shrek,” among others.

“Inventing Worlds and Characters” continues into a room devoted to sci-fi and horror films, which includes costumes and props from “2001: A Space Odyssey” and “Avatar,” and drew some of the biggest crowds during the press preview.

Tom Hanks said his favorite room was the “Path to Cinema” exhibit, which collects artifacts used to create moving images in the days before movies were made.

Spanish director Pedro Almodovar gets his own room in the “Stories of Cinema” exhibit, with multiple video screens and walls of posters.

Legendary Japanese animator Hayao Miyazaki is the subject of the most lavish temporary exhibit, which covers his entire career and the output of his Studio Ghibli.

Some of the objects in the Miyazaki exhibit have never been displayed outside of Japan.

The “Mother Tree” in Miyazaki’s 1988 film “My Neighbor Totoro” is recreated inside the exhibit.

Up near the top of the former May Co. building that houses most of the museum’s exhibits, the shark from “Jaws” watches over a pair of escalators.

Fundraising chair Bob Iger said he can’t wait to see a Hollywood premiere — “preferably a Disney movie” — inside the 1,000-seat David Geffen Theater, which sits inside the museum’s dome.

The roof deck on top of the David Geffen Theater has already been used to film musical performances for April’s Academy Awards show.