Phillip Schofield, 57, was joined by his This Morning co-host Holly Willoughby for today’s show, where the pair discussed a whole range of topical matters. With the number of coronavirus cases increasing in the UK, the presenter’s held a special call in to speak with ITV viewers about the precautionary measures they should be taking. However, this lead the television veteran to confess he fears he is making mistakes when it comes to trying to stop the spread of the disease.

Both were joined by resident agony aunt Vanessa Feltz, 58, to host the call in which focused on the question on whether people are being unreadable to stockpile antibacterial supplies.

Viewer Claire insisted people need to stop panicking over the outbreak, given shelves are being emptied of sanitisation products.

The cases of coronavirus have reached a total of 87 in the UK, with the Prime Minister announcing his four-stage plan to combat the spread of the COVID-19 virus yesterday.

However, in light of the discussion on the show abut precautionary measures, Phillip expressed his worries about mistakes he may have made to protect himself from catching it. 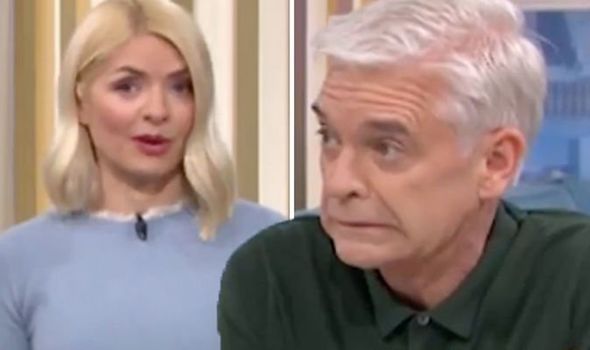 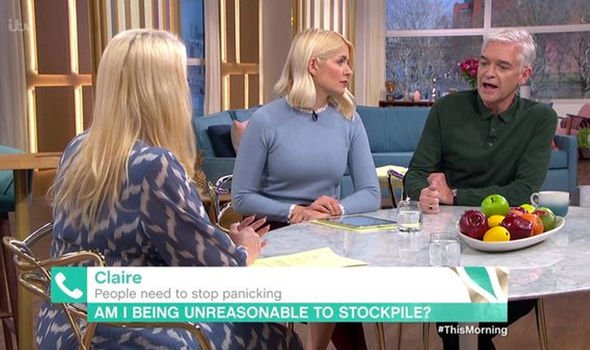 After Vanessa gave her take on the matter, Phillip explained: “Where my heads at – and it just did it then as I was saying it out loud – is the fact, yeah we’re washing our hands, you’re not supposed to touch your face.”

Going on to confess the mistake he made live on the show, the host said: “During what you were saying then, I went like that,” as he mimicked leaning forward and putting his hand to his chin.

He continued: “And thought, ‘Ah, I’ve touched my mouth’. That’s where my head goes at the moment.”

Holly also addressed another error members of the public could be making which would accelerate the spread of the coronavirus. 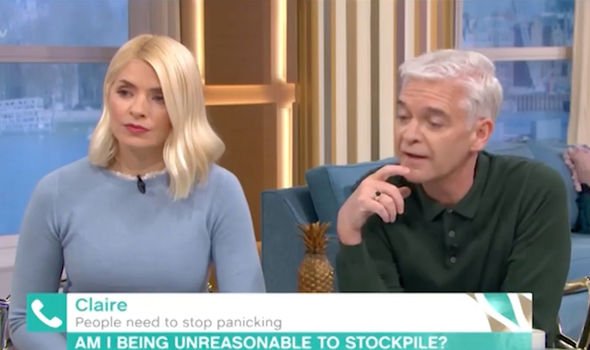 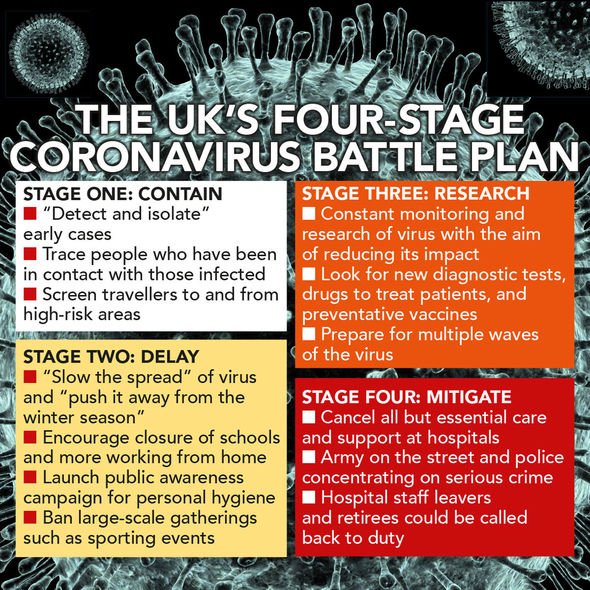 Turning to Phillip, the host said: “So, what I was saying to you earlier was, you keeping washing your hands and then you pick up your phone which you were touching before you washed your hands.

“So you’re transferring it all back on anyway,” Holly declared, to which Vanessa jumped in to add the way to combat the spread of germs would be to swab the screens of devices clean.

“So, we need to stockpile on swabs?” the presenter asked.

The agony aunt responded: “People are doing that, that’s exactly what they are doing.”

Vanessa continued: “And they’re stockpiling on disinfectant spray and wipes and all that kind of thing.

“But if you’re washing your hands and you’re mostly at the home or in the office or somewhere where there’s a loo, you use soap and water and it’s better than gel,” she added.

The past 24 hours have seen the biggest daily jump in the number of cases present in the UK since the outbreak began.

At the start of the week, it was confirmed there were 39 cases of coronavirus reported, with yesterday hitting a total of 51.

Today saw the figure increase to 87, with the NHS declaring a level 4 incident, the highest level of emergency issued by the health service.

Following news of the outbreak last month, Phillip worried whether he should self-isolate in light of a recent family getaway to France.

“Do we shut down this place?” he enquired as he discussed the matter with two guests on the show last month.

Former soap star Nicola Thorp, 31, replied: “It does seem like we’re constantly talking about coronavirus without talking about the implications of it spreading,” but the government’s announcement yesterday seemed to clarify matters where people were concerned.