Former Real Housewives of Beverly Hills star Kim Richards’ — Kyle Richards’ older sister — new book The Whole Truth: The Reality of It All was supposed to be released on April 28, 2020. But, earlier this week, publisher HarperCollins took down the information page for the book from their website. Now, it has been revealed that it will not be released as scheduled. Could Kim’s sisters Kyle and Kathy Hilton be the reason for the delay? 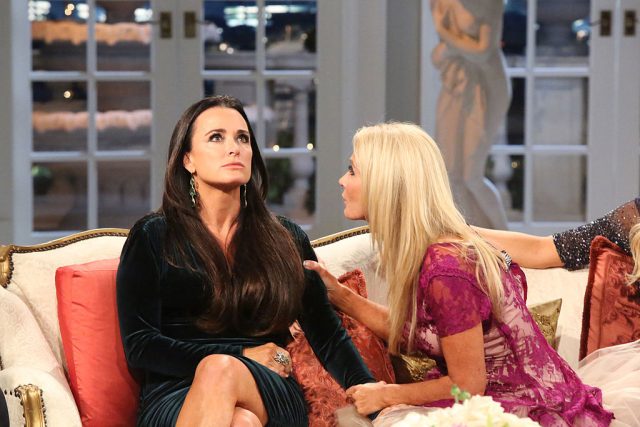 According to Amazon, the release date for TheWhole Truth: The Reality of it All has been pushed back a whopping ninemonths to February 2, 2021. Champagne andShade is reporting that the book is supposed to be a tell-allabout everything from Kim’s career as a child actor to her stint on Real Housewives of Beverly Hills.

The speculation is that she would also have a lot to say about her sisters Kyle Richards and Kathy Hilton. This could be one of the reasons that fans will have to wait so long to read the memoir.

HarperCollins described the book as a“blazingly honest memoir” where Kim “speaks her mind,” and the description alsoindicated that Kim claimed to be “a whipping post as a sister.” Those shockingclaims might be one of the biggest reasons that the release date has beenpushed back.

Kim has already had trouble with herghostwriter, Allison Kingsley Baker, who sued the RHOBH alum for $10,000 in 2019. She accused Kim of not paying herdespite their signed contract and “a job well done.”

If the book has been finished for at least ayear, it’s possible that Dey Street Books – the division of HarperCollinsresponsible for the tell-all – is covering all their bases. They could bemaking sure that Kim’s book won’t cause them any more problems before theyallow it to hit bookshelves.

Kim, Kyle, and Kathy appear to be gettingalong at the moment, and Kyle recently claimed that they were “in a good place”and they would hopefully stay there. The peace comes after some difficult yearsthat saw the sisters feuding.

Kyle Richards is curious about the memoir

At an event in mid-February, Kyle Richardstold People magazine that she reallydidn’t know anything about Kim’s book. Kyle did admit that she and Kathy were“taken aback” by HarperCollins’ description of Kim being “a whipping post as asister.”

“I’m going to have to read it,” admitted Kyle.“I’m very curious, actually.”

Kyle Richards reiterated that she hopes her relationships with Kim and Kathy remain in a good place after years filled with ups and downs. Kyle and Kim’s drama played out in front of Bravo cameras during seven seasons of RHOBH, and Kathy had a serious issue with Kyle’s 2018 Paramount network drama American Woman, which she created and executive-produced.

“All I know is that, you know, every familyhas stories and I was very respectful when I did American Woman,” said Kyle. “And I always had said that, eventhough it caused contention in the family. So I’m assuming my sister, I’mhoping — I don’t know. We’ll see.”

Kyle and Kathy were able to work things out,as were Kyle and Kim after they nearly came to blows at the RHOBH Season 5 reunion in 2015. At thattime, Kim – who is a recovering alcoholic – admitted that she took one of herex-husband’s pain pills. And, Kyle was upset because she believed Kim wasconstantly making her feel like all of her problems were her fault.

“I am tired of being blamed for everything andam at a point in my life where I just can’t do it anymore,” Kyle Richardswrote in her blog after the season 5 reunion. “…I know that whatever I do,she will find fault in. So why even bother trying anymore?”

In November 2019, Kim Richards revealed thatshe had a health scare after going in for a mammogram. Kim said her doctors hadto do a biopsy, and that “tough scare” was a hard time for her, and she thinkssomething like that changes people.

Kim says her family keeps her motivated to stay as healthy as possible, but her health scare forced her to “put everything in perspective.” She also turned to a neuroscientist and spiritual activator, in addition to becoming a rakhi practitioner.

Kim Richards says she now loves herself andhas never been happier. And, maybe after her health scare and resolving theconflicts with her sisters, she had to do a few re-writes before releasing The Whole Truth: The Reality of it Allto the public.

Kyle Richards returns for the new season of the Real Housewives of Beverly Hills later this spring on Bravo.