Calling herself an ‘old dog,’ the ‘West Side Story’ actress admits that she was ‘dismissive of black lives that matter in our Latin community’ when defending Lin-Manuel Miranda against the criticism of the movie.

AceShowbiz –Rita Moreno regrets her remarks which she made in response to the criticism levelled at Lin-Manuel Miranda and his film “In the Heights“. The acting vet has admitted she’s “disappointed” at herself after defending the “Hamilton” creator against the colorism claims regarding his new movie.

Catching the heat, the “Singin’ in the Rain” actress posted a statement on Twitter on Wednesday, June 16 to address the backlash. “I’m incredibly disappointed with myself,” she admitted. Reflecting on her mistake, she elaborated, “While making a statement in defense of Lin-Manuel Miranda on the Colbert Show last night, I was clearly dismissive of black lives that matter in our Latin community. It is so easy to forget how celebration for some is lament for others.”

Not diminishing Miranda and his work, she added, “In addition to applauding Lin for his wonderful movie version of In The Heights, let me add my appreciation for his sensitivity and resolve to be more inclusive of the Afro-Latino community going forward.” She concluded her tweets with a playful remark as writing, “See, you CAN teach this old dog new tricks – RITA.” 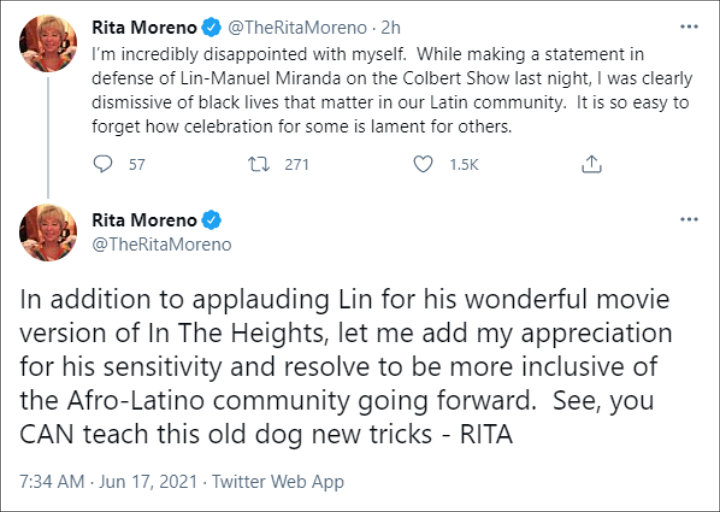 Rita Moreno responded to the backlash over her ‘In the Height’ comments.

Moreno shared her two cents on the “In the Heights” controversy when stopping by “The Late Show with Stephen Colbert” on Tuesday night. The Puerto Rican actress/singer said the criticism, which has focused on the dearth of darker-skinned Afro-Latinx characters in the movie, “really upsets me.”

The 89-year-old, who’s worked with Miranda on her documentary “Rita Moreno: Just a Girl Who Decided to Go for It“, went on elaborating her stance, “You can never do right, it seems. This is the man who literally has brought Latino-ness and Puerto Rican-ness to America.” She continued, “I couldn’t do it. I mean, I would love to say I did, but I couldn’t. Lin-Manuel has done that, really single-handedly and I was thrilled to pieces and I’m proud that he produced my documentary.”

When host Stephen Colbert asked if she thinks that the criticism was misplaced in focusing on Miranda, Moreno doubled down on her remarks as saying, “Well, I’m simply saying, can’t you just wait a while and leave it alone? There’s a lot of people who are Puerto Rican who are also from Guatemala who are dark and who are also fair. We are all colors in Puerto Rico. This is how it is. It would be so nice if they hadn’t come up with that and left it alone, just for now. They’re really attacking the wrong person.”

Miranda himself has apologized for falling short on black representation in “In the Heights”, in which he stars in addition to serving as producer. “I can hear the hurt and frustration over colorism, or feeling still unseen in the feedback,” he said in a lengthy statement posted on Twitter on Monday. “I hear that without sufficient dark-skinned Afro-Latino representation, the work feels extractive of the community we wanted so much to represent with pride and joy. In trying to paint a mosaic of this community, we fell short. I’m truly sorry.”

Promising to do better, he added, “I’m learning from the feedback, I thank you for raising it, and I’m listening. I’m trying to hold space for both the incredible pride in the movie we made and be accountable for our shortcomings.”