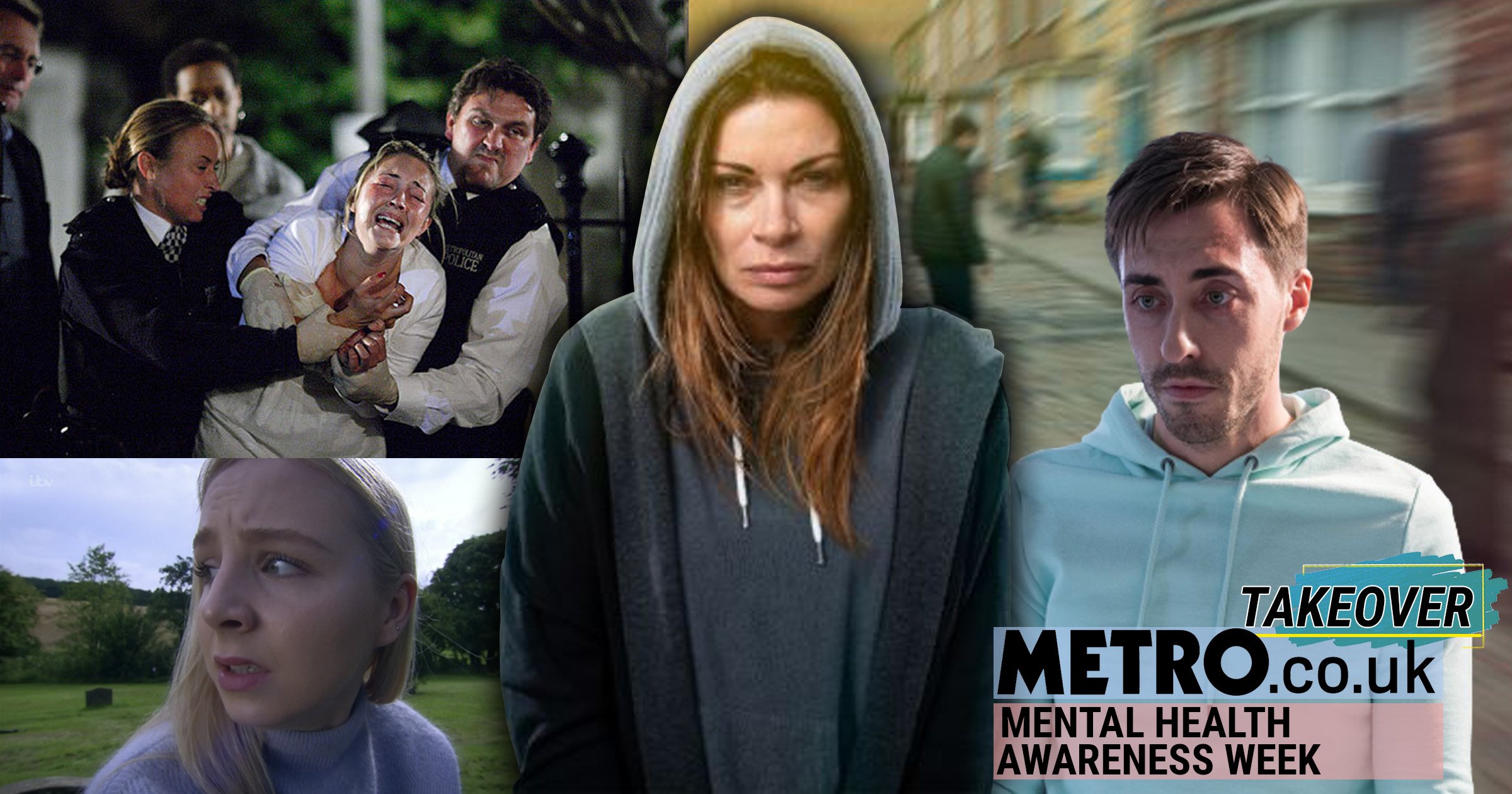 It can often be underestimated the difference a soap can have when it comes to mental health awareness. A collective band of regular millions watch shows like EastEnders, Coronation Street, Emmerdale, Hollyoaks and Casualty – they have a loyal audience who escape into the crafted, fictional worlds.

But, fiction as it is, soaps also have a platform and a responsibility to reflect real life and offer a representation of genuine issues. Working with charities, they make regular efforts to do this and for the majority, the effect is far reaching with soaps triggering online discussions about the issues raised, encouraging others to speak out and kicking off a surge in contacts to charities.

Seeing characters we feel we know experiencing these issues builds an understanding and empathy in those unaware of the issue and for those who share the characters’ mental health battle, it allows them to feel shown, acknowledge that they aren’t alone and give them a way to process and potentially talk about their own life.

Over the years, there have been many soap storylines which fit the bill in raising awareness and creating a dialogue about topics which were previously taboo – from eating disorders to male suicide and self harm to schizophrenia.

With two fantastic actresses in Lacey Turner and Gillian Wright, this ongoing story is one of EastEnders’ best ever. It has certainly portrayed the extremities of bipolar disorders, which can see high levels of mania and even euphoria and deep, dark lows of depression both of which can lead to behaviour of paranoia, suicidal tendencies and behaviour that puts people in danger. What is has also effectively done, though, is shown how Stacey and Jean live with condition day to day – how they are when it’s stable, the eccentricities in behaviour that are less obvious and how life events impact them differently.

Showing a depression in an older male was a rare thing for soaps – especially for hardman Zak Dingle, who fell apart with a deep, psychotic depression. Emmerdale was praised rightly for its choice of character and condition and the portrayal of Zak as a lost soul and shadow of his former self. It took Zak a while to identify that was nothing was going on, a commonality with the condition and with males in particular – but it allowed many men back in 2012 to watch and be able to identify with Zak and recognise themselves in how he was feeling.

One of Coronation Street’s most effective pieces of drama of all time saw a heartbreaking episode in which the body of Aidan Connor was found with a goodbye note. The power behind this story was the signs of Aidan’s despair were hard to spot and weren’t signposted heavily – showing that anyone can be fighting a battle we know nothing about. The waste of life, the broken family and a community in shock made for some hugely talked about scenes and a surge in calls to male mental health charities.

Tortured soul Lily battled with self harm for several years in Hollyoaks, with the situation exacerbating on many occasions. Like many, she was extremely secretive about what was happening to her and in the end, her dangerous addiction which she thought she had control over was the death of her. Along the way, many issues were explored including the hopes and dreams of Lily, parents questioning their role and friends reacting and even forming a pact as if the self abuse were fashionable. A very modern and moving piece of drama for both teenagers and any adult who has responsibility for a child facing the pressures of conforming through social media and celebrity culture. Beautifully performed and with a heartbreaking legacy.

Carla Connor has suffered more tragedies than even the most toughest soap fighters and there came a point where she reached a stage she could no longer control, with her years of PTSD and horrific losses and mistakes manifesting in serious spells of psychosis. Believing herself to be a killer and consumed by self loathing and hatred, Carla’s mental state became the focus of a special episode which played with the formula and showcased as best as possible what was going on in her mind – from voices and paranoia through to visions of the dead.

Back in 1996 and 1997, the illness of schizophrenia had been rarely explored in any form of media and was still something many were frightened of – perceiving sufferers to be dangerous and to be avoided. The story of Joe Wicks shed a whole knew light on this as it explored the life of a vulnerable young lad, done wrong in his upbringing by very weak dad David and who started expressing manic behaviours. He was eventually diagnosed and the show explored the stigma towards him, how his life was impacted by change and the medication’s effects on him. More importantly, Joe was a character fans rooted for, who was likeable and who was the opposite of any fearmongering stories of schizophrenics rampaging violently – he was a young lad with an illness who needed treatment.

A fan favourite of the show, Michael Stevenson was the perfect character to explore male depression with – as a paramedic he was on the front line, seeing horrific incidents, death and loss every day and when he felt to blame for a tragedy which resulted in fatalities, we saw a breakdown and a very raw descent into depression. Casualty weren’t messing around with this one – they really did their research and invested the time – showing everything in Ian’s journey down right through to a heartwrenching suicide – and then exploring his very gradual process towards a light at the end of the tunnel. It was a hard watch but a prime example of using a popular character to remind any viewers going through the same that they are not alone.

Hollyoaks did its first foray into eating disorder exploration years ago with an anorexia storyline ending in a tragic death and this time, Cleo’s condition was bulimia, a deeply secretive illness which brings the sufferer shame and makes them addicted to bingeing and purging food. As someone with an abusive past and who has been let down by many people she trusted, Cleo’s insecurities blended well into a story of this nature and it was sad to watch. Hollyoaks also responsibly showed what the illness can lead to as an exhausted Cleo suffered a heart attack on her wedding day, giving her a wake up call to seek help – while she still can.

Aaron’s entire story arc has been dominated by his self hatred and lack of confidence, triggered initially by an abusive childhood at the hands of his father. When we first met Aaron, he was forever lashing out and the general consensus was he was a badly behaved teen who needed discipline. But what we eventually discovered is that Aaron was a young man suffering and with few outlets for his emotions, it became violence and self harm – he needed love, not isolation. His battle with his sexuality further cemented this as he hurt both Paddy and Jackson to try and keep the fact he was gay under wraps and it was only when he started receiving genuine warmth and love that he was able to deal with things a lot more easily. That said, Emmerdale are good at not forgetting Aaron’s troubles and he has had relapses of self harm and anger issues.

A slow burning storyline initially focusing on panic attacks and stress, EastEnders captured how frightening these moments could be as Mick collapsed and was hospitalised. But Mick, determined to always be the strong one, would keep this a secret for a long time to come. His situation spiralled further when his childhood abuser suddenly came back into his life and as she gaslit him into self loathing and blame, it culminated in a seriously effective episode involving a Samaritan’s phone call, with a throwback to what his own son Lee went through himself.

Belle is another character whose history is seeped in tragedy and her schizophrenia has been re explored many times. When she first started showing troubling signs, the Dingles were powerless over what to do and after Belle accidentally killed Gemma, her demons came back – including in the form of Gemma herself. Emmerdale is consistent with Belle’s mental health, with the family always conscious of how things might impact her – and we’d be surprised if it wasn’t revisited again. Eden Taylor-Draper does the scenes justice and is always able to remind us of Belle’s vulnerability.

A very effective form of telling a mental health story is showing that it doesn’t discriminate. ‘What has he got to be depressed about’ is a prevalent attitude and Scott fitted the bill to shatter these illusions. A bright, happy, outgoing, funny, joyful character who sees the best in anyone, no-one could see or expect the demons consuming his inner self. But Ross Adams played a blinder, showing Scott’s fading façade and the darkness of his depression becoming more and more in control.

Two characters who are synonymous with realistic and achingly good portrayals of alcoholism are Phil and Peter and both long running characters have their entire arcs dominated by the demon drink. Peter is currently suffering from it once again, knowing that he could die this time if he ever relapses again and Phil’s initial storyline from 1997 is playing out on repeats, showing raw and effective performances from Steve McFadden. Both he and Chris Gascoyne portray the destructive illness in its full ugliness – and they both have lost everything more than once because of it.

The alpha male from a family dominated by mental illness and a bad home life, Sean usually dealt with his problems through aggression, bullying and violence. But a sean who returned recently was much more solitary and empty and it soon became clear that he had come to say his goodbyes.

It took a hugely effective scene between Sean and long suffering mum Jean to convince him his life was worth battling for and we left Sean with a bittersweet ending of sorts and on the start to his hardest battle yet – finding his self worth. It was a deeply effective return story, very fitting for Sean, Jean and Stacey and a great portrayal of the root of the original character and where his explosive flaws came from.

With a brilliant team that includes Alex Beresford, Russell Kane, Frankie Bridge, Anton Ferdinand, Sam Thompson, Scarlett Moffatt, Katie Piper and Joe Tracini, each of our guest editors have worked closely with us to share their own stories, and also educate, support and engage with our readers.

If you need help or advice for any mental health matter, here are just some of the organisations that were vital in helping us put together our MHAW Takeover: