A version of this review originally ran in January during our coverage of the 2021 Sundance Film Festival.

If you had walked up to Harlem’s Mount Morris Park, on just about any given Sunday in the summer of 1969, you’d have run in to a crowd. There would be vendors selling food, kids running around, families grilling meat, folks lounging in the sun. You’d hear laughter, and chatter, and the sound of a good time. You’d smell what one resident recalls, decades later, as the combined scent of “Afro Sheen and chicken” wafting through the air. You’d probably catch someone climbing up on a tree, trying to get a better look at the stage set up in the middle of the grass. Tony Lawrence, a local mover and shaker who’d been recruited by New York City’s Parks Department several years earlier to organize outdoor events in the neighborhood, would be up on that platform, introducing the next act. He was the official M.C. of the Harlem Cultural Festival, an ongoing series of free concerts that, in its third year of existence, was just hitting its stride.

Which means that you could wander into the throng and possibly catch a comedian (Moms Mabley, Willie Tyler and Lester), or a gospel group (Professor Herman and the Voices of Faith), or anyone from B.B. King to the 5th Dimension, Mahalia Jackson to Mongo Santamaria, Stevie Wonder to Sly and the Family Stone. This was the level of talent that was coming to the Cultural Festival on the regular, to entertain and enlighten and empower anyone who was uptown and around. You’d see what one attendee described, with a sense of awe and pride, as ” a sea of black people.” You’d see a community.

Summer of Soul, the documentary from Ahmir “Questlove” Thompson about the series of once-in-a-lifetime lineups dubbed “the Black Woodstock,” lays all of this out for those of us who weren’t there to witness it firsthand. (It opens in theaters today in New York and Los Angeles, and goes wide on July 2nd.) About that nickname: It was called that by Hal Tulchin, who was brought on to chronicle as much of the ’69 festival as possible. Cameras were rolling every time a performer stepped onstage (which had to be set facing the sun, he says, because they couldn’t afford a massive light rig) and they captured the crowd singing, dancing, and digging the scene. Roughly 100 miles away that same summer, another big happening was in progress on a farm upstate, and the movie that ended up documenting those three days of peace and music had been a hit. Tulchin thought the comparison could help him sell his project as a companion piece of sorts. No one bit. Put it this way: The “Woodstock” half of the nickname wasn’t the part that potential buyers had an issue with.

It tells you why the extraordinary footage of those gatherings in Mount Morris Park sat in Tulchin’s house for close to 50 years, until the Roots drummer discovered that yes, the footage did exist, it had been preserved and lo, it was good. If Summer of Soul were nothing but a labor-of-love rescue mission from a soul-music scholar, it would still be a first-rate concert film. What’s captured here is a vibrant, vital, essential look at a handful of performers in their prime, and then some. A 19-year-old Stevie Wonder jumping in front of his keyboard before banging out a manic drum solo. Nina Simone turning “Backlash Blues” into the equivalent of a boxing match. David Ruffin, fresh from leaving the Temptations, holding a single note for 20 seconds before immediately going into a soul-man scream. Sly and his multiracial band at their peak, reminding you that funk is both a noun and a verb. Gladys Knight and the stop-on-a-dime-hand-you-back-nine-cents-change choreography of the Pips. Mahalia and Mavis Staples together, taking everyone to church. 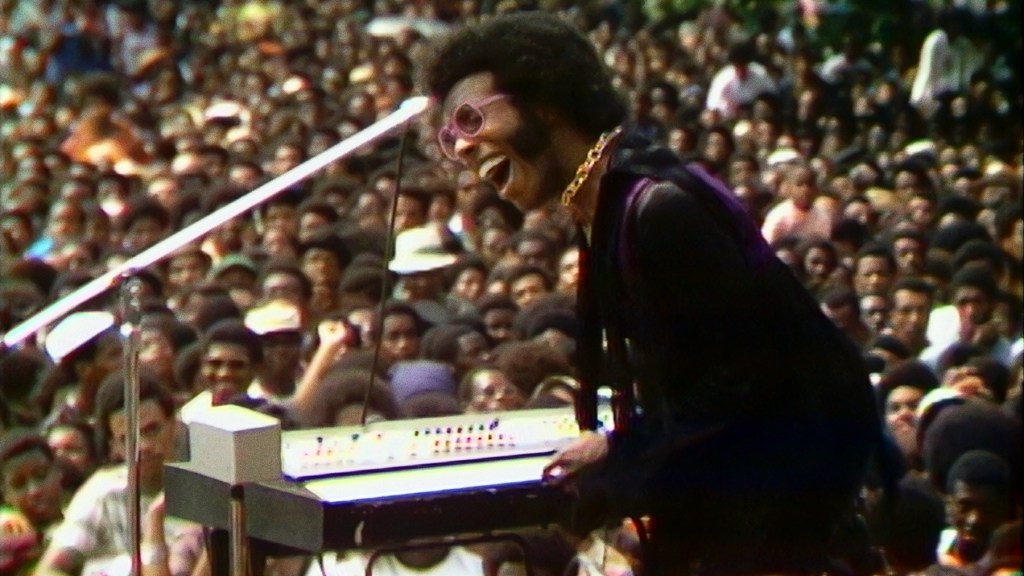 Sly Stone, performing at the Harlem Cultural Festival in 1969.

This is black music at the end of a turbulent decade filled with rights gained and leaders lost. It’s Motown, the blues, R&B, Afro-Latino jams and praise-the-lord hymns — songs that are loving, healing, spiritual, carnal, buoyant and enraged. Thompson knows this music well, and he’s trying to preserve all of this, to save these lost performances from the ravages of time and the racist tastemaking that originally left the film cans gathering dust in a basement. Indeed, the musician-turned-documentarian has said that he’d originally intended to do something closer to a greatest-hits revue, cherrypicking the best moments from the festival’s eight-weekend run.

What was happening outside his — and everyone’s — door during 2020’s summer of rage galvanized Thompson to go a little further, however, and Summer of Soul not only fleshes out the story of how the Harlem Cultural Festival peaked but provides a necessary context around it. It’s also a testament to the rich culture of the neighborhood in the late ‘60s, during the era of Black power and beauty. And it’s a portrait of a moment of violence and anxiety, riots and volatility, inner-city drug epidemics and a divide created by the advocating for non-violent protests vs. any-means-necessary self-defense. Montage after montage demonstrate how the era was faced with “White America at its worst” vs “neo-super-blackness.” Or, to use another quote from someone recalling one of those Sundays in the park, how “the concert was like a rose coming through cement.” You understand what people were up against, which makes the scenes of folks coming together that much more poignant and joyous. They’re not just citizens. They’re survivors. This is the soundtrack to a struggle, but also a hard-won, celebratory day in the sun.

There are no direct parallels to those struggles and the ones African-Americans face today embedded into the movie’s mix here, no Ferguson or BLM footage used to collapse time — Thompson knows that we’ll recognize this on our own, like he did. (The closest he gets is the movie’s referential subtitle: “…Or: When the Revolution Could Not Be Televised.”) Summer of Soul is both a tribute to the artists and, just as importantly, their audience — which is what makes it not just a great concert film but a great documentary, period. When a now-grown attendee watches old footage of those shows, he declares that he’d wondered if he’d dreamed the entire thing: “Now I know I’m not crazy.” His memories, and the memories of several generations, have been kept alive, thanks to Questlove. It’s a hell of an act of reclamation. And it’s damn near a masterpiece.