‘The Hunt’ Director Craig Zobel Fights Back Against Fake News, and Wins

Donald Trump tweeted about “The Hunt” in August 2019; the next day, Universal canceled the September release. Director Craig Zobel knew the concept was ludicrous — liberal gun nuts hunt conservative rednecks for sport — but he also believed that it would be seen for what it was: a satire designed to skewer both ends of the political spectrum. However, the release came as the country reeled with the tragedies of mass shootings in California, Texas, and Ohio, creating a perfect time for Trump to pluck some Fox News talking points and declare an impending “liberal fantasy” engineered by Hollywood “to inflame and cause chaos.”

As usual, the leader of the free world had no idea what he was talking about. “I felt like it had been colossally misunderstood,” Zobel said, months later. “My first instinct to make sure people would see the movie.”

That proved tricky. Zobel said there was a point when “The Hunt” could have been shelved permanently, even as rival distributors approached Universal about the potential to acquire it. “I liked this movie, I was proud of it, and wanted people to see it,” Zobel said. “It became something that had even less to do with the movie business in a weird way and more about the culture of making a movie for a big corporation. They have different needs than I do as a filmmaker.”

“The Hunt” will finally hit theaters March 13, with a campaign that leans into its controversial past. The trailer says it all: “The Most Talked About Movie of the Year Is One Nobody’s Seen Yet.” Truth in advertising never felt more real.

And yet, for those of us who have seen “The Hunt,” nothing about the discourse surrounding it should come as a surprise. A nimble, energetic update to “The Most Dangerous Game,” the movie resurrects the grotesque thrills of “Hostel” by way of the acerbic social commentary of “Get Out,” yielding the most incendiary form of escapism produced on the studio dime since that button-pushing crossover hit.

The script, co-written by Nick Cuse and “Watchmen” showrunner Damon Lindelof, mocks the lunacy of right-wing conspiracy theories and the extremist rage of politically correct liberals, and the result is one gruesome punchline after another about a country that has decimated its middle ground. “Partisanship has gotten to a certain place where it feels like everybody is picking one side to be on,” Zobel said. “I feel like we have all done that culturally. Politics is not even the conversation anymore.” 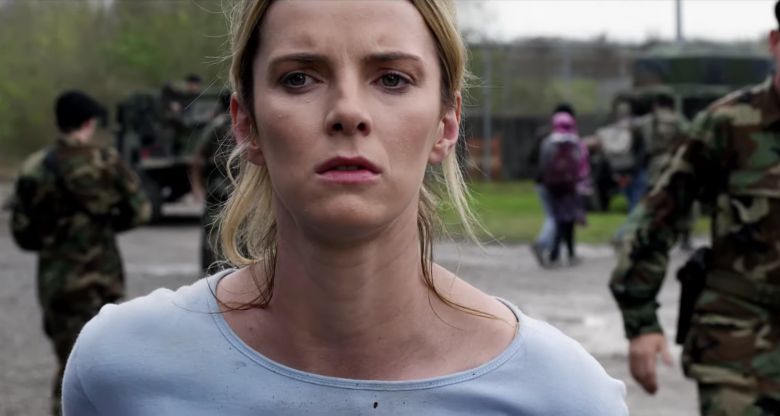 Betty Gilpin in “The Hunt”

In fact, “The Hunt” envisions a world in which political inclinations have devolved into tribalistic acts of war. From its opening minutes, a group of kidnapped southerners dodge bullets and mines across a mysterious countryside. As the body count rises, the small of set of survivors realize they’ve been drugged and dropped into “Manorgate,” an internet conspiracy theory made real. The lefty killers treasure the opportunity to win their debates: “Climate change is real,” says one man, pulling the trigger. Two gun-wielding geriatrics debate whether it’s appropriate to use the term “black people” or “African Americans,” and a right-winger expresses delight as he envisions recounting his experience to Sean Hannity.

Finally, “The Hunt” settles on a survivor with no apparent political agenda. That’s Crystal, played by Betty Gilpin as a no-nonsense woman whose stern commitment to overcoming every new assault makes her look a lot saner than everyone else. Crystal epitomizes the perils of a moderate America as she transforms into a one-woman Rambo and faces a grisly showdown with the Manorgate overlord played by Hillary Swank.

“She’s a person who has been plunked into this thing who doesn’t have big stakes in the conversation,” Zobel said. “You know, a lot of people don’t think about politics all day. To me, it was important that that voice was a part of the conversation.”

Zobel’s own voice has been marginalized in stories about “The Hunt” controversy. When initial reports surrounding the movie’s release first broke in Variety and The New York Times, only producer Jason Blum and Lindelof (who shares a producing credit) weighed in. When “The Hunt” was first canceled, Zobel provided a written statement to Variety expressing a desire “to entertain and unify, not enrage and divide.” These days, he remains diplomatic in the way he discusses his relationship with the studio, but the frustration keeps sneaking in. “It’s my movie, and I definitely feel some ownership over it,” he said. “I think we made something cool, and was constantly trying to remind everybody that it wouldn’t break the world for it to exist.”

Zobel’s passion means he tends to take public scrutiny in personal terms. He contended with a microcosm of “The Hunt” backlash with his 2012 thriller “Compliance,” a dizzying look at the real-life experiences of a Kentucky restaurant manager (a pre-“Handmaid’s Tale” Ann Dowd) tricked by a demented prank caller into administering a strip-search on one of her employees.

But while that movie instigated contentious Q&As at Sundance and beyond, Zobel said working in the bubble of smaller-scale productions left him and his peers blindsided by “The Hunt” fallout. “A lot of people were not prepared to deal with how loud it got, and how fast,” he said. “I was constantly making a case for what I thought the plan of action would be. I was also trying to work with all of the different stakeholders.”

Meanwhile, he contended with a media narrative spiraling out of control and death threats on Twitter. He disputed reports, including one in IndieWire, that “The Hunt” performed poorly at test screenings. “We did some right before everything blew up,” he said. “We had just done two back to back in one night. It tested really well. People laughed at it, they were excited by it. That’s why this was so surprising later.”

Zobel said the most frustrating aspect of summer mayhem was that he couldn’t correct the record. “The film became something that it never was,” he said. “These kind of things became truth.”

“The Hunt” never became a liability for Universal on the level of “The Interview,” the 2014 Seth Rogen comedy on North Korea that led hackers to virtually destroy Sony Pictures from the inside out. Nevertheless, both cases reveal what can happen when satire becomes so astute that its intentions spill off the screen and into real life.

“The Hunt” also illustrates this phenomena in its plot, and though it would be a spoiler to explain exactly why, the movie’s narrative arc turns on what can happen when fake news inspires the real deal. To that end, the hysteria surrounding the release of “The Hunt” registers as accidental marketing, a means of piercing through the noise of our dense media culture.

Zobel acknowledged that “The Hunt” plays with blunt caricatures to make its point. “I felt that it was inherent in the premise,” he said. “To make a movie about people misunderstanding what the other side believes, and assuming the worst of people, just doesn’t work in a wildly humanistic Dardenne brothers movie. You have to use more satirical story language to make that work. You have to have these archetypes.”

However, he insisted that he and the movie’s screenwriters engineered “The Hunt” with bipartisanship in mind. “That greatly informs my relationship to this movie,” he said. After directing the lyrical post-apocalyptic drama “Z for Zachariah” in 2015, Zobel made inroads with television gigs, including “American Gods” and “The Leftovers,” where he worked with Cuse and Lindelof.

“When Damon and Nick first called me, they like, ‘Hey, what if we made something that was literally palatable to multiple groups?’” Zobel recalled. “I said, ‘Yeah, that sounds like the hardest movie to do. Let’s try.’” I didn’t want it to be washed out. There’s a way to make a movie that doesn’t hold any politics in it that everyone can enjoy.”

If “The Hunt” solely reflected the sensibilities of the guy who made an understated, minimalist chamber piece like “Z for Zachariah,” it might look like a random tangent. However, Zobel has been developing a blend of edgy and perceptive cultural insight in his other works. (Of note: He co-founded the Flash animation “Homestar Runner” while in college.) Along with his fellow North Carolina School of the Arts classmates David Gordon Green, Jody Hill, and Danny McBride, Zobel’s work careens through a range of genres and tones while attempting remarkable inquiries into American identity.

His 2007 debut “Great World of Sound” plays like an unusual blend of Arthur Miller and Sacha Baron Cohen, as it follows two salesmen drawn into a song-sharking scheme and uses hidden cameras as they trick a range of unsuspecting targets. “Compliance” also pulls from real life: The scenario is so unnerving and unbelievable that many viewers will struggle to accept it as a true story — and thereby prove the dynamic that created the circumstances in the first place.

After “The Hunt,” Zobel has come around to the big picture. “Prior to all this stuff happening, I would’ve pushed back and said, ‘I just tell stories,’ Zobel said. “Now I can’t deny that this movie is on a continuum of questions. But this isn’t a giant psychological treatise on partisanship. That’s not what we need right now — that would turn people off. What we need is for everybody to calm down, laugh, just have fun.”

“The Hunt” does that, at least for audiences willing to engage with its wavelength. Zobel said that, until “The Hunt” became a liability, he found himself largely satisfied with his first bonafide studio project. “I am not just paying lip service when I say that making this movie was incredibly easy to work with a studio on,” he said. “On an independent film, sometimes you have to interact with some investment group to see if they can get you some of the money. I didn’t have to do that with the studio. They appreciated me.”

Well, until last summer, anyway. “The parts about it that have been hard is that the studio has a lot of stakeholders, and the movie got canceled,” he said, and chuckled. “Until then, it was awesome.”

Zobel is currently shooting the miniseries “Mare of Eastwood” with Kate Winslet, and hasn’t had time to fully process the last eight months of mayhem. “I’m still in the end of all this and not one hundred percent sure what my takeaway is,” he said. Then he paused, and found it: “I would say that I am more acutely aware of the appetite for risk not being incredibly viable in certain scenarios,” he said. “Usually I’d think everybody talking about the movie would be a great thing. But here it was enough to get the movie canceled. That is just literally the way it works when dealing with a bigger corporation. So I guess I’ve learned that.”