Steve Coogan and Rob Brydon reunite for fourth installment that airs March 3 on the BBC and as a film in the U.S. in May 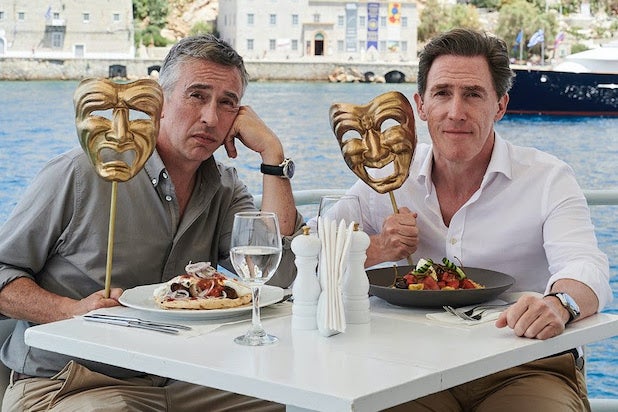 Ten years and four seasons in the making, Michael Winterbottom’s “The Trip” franchise of comedies starring Steve Coogan and Rob Brydon is coming to an end, and Winterbottom admitted that this time around “felt final” for the team.

You’d think that with a premise that involves two guys traveling around Europe, eating gourmet food, talking about nothing in particular and doing Michael Caine impressions, it wouldn’t be hard to keep doing these stories forever. And yet, the fourth and final season, “The Trip to Greece,” airs on BBC on Tuesday and will hit theaters in the U.S. as a film in May.

Because this latest season is set in Greece, the same location as Winterbottom and Coogan’s latest film “Greed,” Winterbottom says “The Trip to Greece” is framed like the journey of Odysseus in the Odyssey, with Coogan and Brydon finally retiring and coming home after years on the road.

“It felt like that shape, that story, we could borrow a little bit for the arc of the character’s story,” Winterbottom told TheWrap. “That felt kind of final.”

The movies have attained something of a cult popularity in America for their simplicity, and Winterbottom has said in interviews that whenever he’s attending film festivals or doing other press, he always gets asked when the next season is arriving.

“It’s been a very enjoyable thing to do, and it’s very simple, in some ways very silly, but this gives us a chance to talk about whatever we want to talk about. It’s just conversations,” Winterbottom said. “Now we get to talk about other stuff.”

One thing that has kept “The Trip” series so enduring is how it has stuck to the same formula: two guys traveling, eating and talking. TheWrap asked Coogan and Winterbottom if they would ever have considered adding a third member to their party, and that, they said, would defeat the purpose.

Including “The Trip” movies, Coogan and Winterbottom have done eight films together dating back to 2000. And while they don’t know what’s next on the horizon, they’re confident something will emerge.

“I’m sure there will be something else that will come along that will present itself,” Coogan said. “Something will emerge that’s different enough but still has the DNA of the stuff that Michael and I do together.”

“The Trip to Greece” airs Tuesday in the UK, and the film was just added to the Tribeca Film Festival lineup and will premiere there in April.