'Zola': Inside the Journey From 148 Tweets to Summer's Must-See Movie

Zola knows you’re ready for her. The anticipation has been there since it was first announced that her viral 2015 Twitter thread would be made into a movie, reaching a fever pitch after its premiere at the 2020 Sundance Film Festival, where Zola was the talk of Park City. And then a global pandemic pushed its release to some far-off future date while we were stuck inside for a year. But the wait is finally over. “I feel like it’s the most anticipated film of the summer,” she shrugs. “And I love that for us.”

For A’Ziah-Monae “Zola” King, she’s been waiting even longer. Zola (“A’Ziah is reserved for family”) has been waiting since she lived it. Iconically known as #TheStory, her saga began with a single tweet: “Y’all wanna hear a story about why me & this bitch here fell out?????? It’s kind of long but full of suspense.” Over 148 tweets, she regaled the bird app with a tale of “hoeism,” killer pimps, suicidal simps and madness in the state of Florida.

As Zola tells it, she was working as a waitress at Hooters when she hit it off with a customer and was invited on a road trip to dance at the clubs in Tampa. Over the next 48 hours, she became an unwitting bystander to prostitution, attempted kidnapping, attempted murder and attempted suicide. #TheStory was instantly everywhere, the entire internet hanging on her every word.

“I didn’t go viral on purpose, obviously,” Zola tells me over Zoom. It wasn’t long before Hollywood came calling. “I wasn’t nervous. I was actually, like, anxious. Like, how are we going to go about this? ‘Cause it had never been done! You take something from Twitter and you make it a movie. Yes. That’s a great idea, and I would love to do that. But how?”

How, it turns out, was with Janicza Bravo. “I didn’t get to see it unfold during the day, but I read it that night,” the writer and director recalls of how she’d come to the thread. “After I read it, I did a bunch of my own dramaturgical digging, because I wanted to know everything there was to know about her. I was just sort of obsessed with it.”

Bravo wasn’t the first person chosen to take Zola’s story from tweet to screen. In 2016, James Franco was hired to direct the project from a script by Andrew Neel and Mike Roberts. Taylour Paige, who would star as Zola, remembers that adaptation being “inherently racist and sexist.” When that version fell apart the next year, Bravo found herself once again in Zola’s orbit.

And she wanted to do it her way. “I will say that I fibbed a little bit about what my intention was because I also wanted the job,” Bravo confesses. “So, I was like, ‘I just want to change this one thing and this one thing. I don’t think that they were expecting to do a full rewrite of the script.”

“They needed to,” Zola adds under her breath.

“The other iteration of the script was using the source material as a jumping off point. It had more invention in it,” Bravo says. “I know it sounds like that means the script that Jeremy and I wrote together has no invention. It does. But she built the house and we’re building inside the house. The previous iteration was building on the land, but outside the house.”

“They was neighbors,” Zola offers, “but across the street.”

At the time, Bravo had cut her teeth on a series of award-winning shorts and made her feature directorial debut with the cringe-comedy Lemon, which likewise debuted at Sundance. She was hired to helm Zola in 2017 and given the go-ahead to choose a co-writer to make a new pass on Zola. Her choice? The playwright Jeremy O. Harris, who had a lauded off-Broadway production, Slave Play, but was still an MFA candidate in the Yale School of Drama.

“I thought, ‘How could I tell the producers that I want to work with a college student?’ It’s my second movie! Everyone’s going to be like, ‘Miss, you’re already Black. You have a lot of things going against you. And now you’re working with a college student?'” Bravo protests. “My ex-husband was like, ‘I don’t know, just tell them exactly how you want it.’ And I was like, ‘But of course!’ I globbed onto his white male confidence, and then I did it. And it happened.” 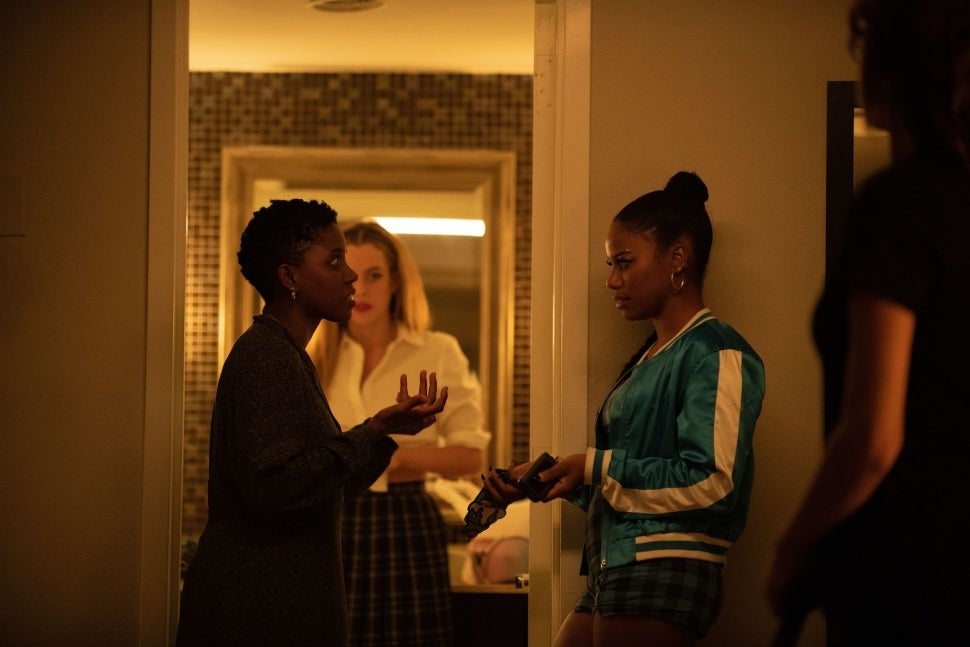 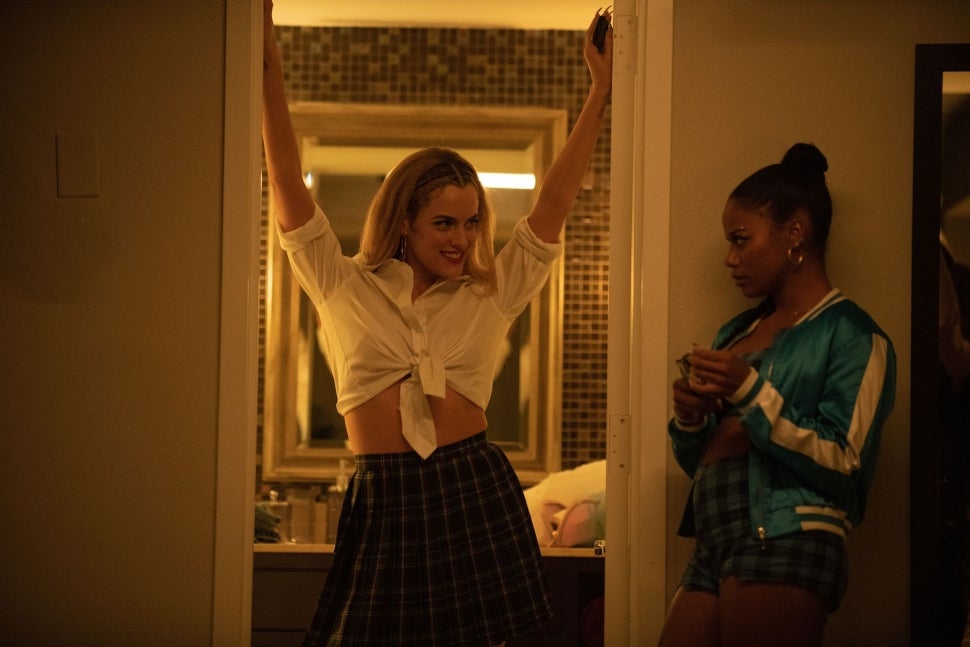 When Zola’s Twitter thread went viral, in its wake came fact checking and further reporting and questions of whether its author was a reliable narrator. (Zola has admitted to exaggerating and embellishing certain details in her Twitter retelling.) Then there was the discourse: On sex work, on agency, on violence, on victimization.

“I’m a student of the theater,” explains Bravo of her approach. “And I am not a journalist. So, facts? That’s not my journey. I was adapting the source material. If I were adapting Chekhov, August Wilson, Lorraine Hansberry, I wouldn’t be asking a question of facts. I would be treating the material like it was sacred text. And so that’s what I did here. The material was the sacred text, and it was true because it was true.”

Still, Zola makes a point to address the conflicting accounts that came from the other players in the story. Bravo read Stefani’s (as Zola’s frenemy is called in the film) version of events on Reddit and her then-boyfriend’s (Derrek) on Facebook. “Basically, each person had presented themselves a little bit differently and also each person made themselves the star of their own movie,” she says. “The best version of all three of those stories were told by our writer, Zola.”

Bravo includes an interlude from Stefani, in which she monologues to the camera that what you’ve heard up till then is opposite of what really happened and Zola is the antagonist of the story. The filmmaker calls her approach to this segment “Brechtian,” breaking the film’s mold and taking the baseline hyperbole to a place of almost parody.

“I thought there is a percentage of the audience that either consciously or unconsciously will arrive at this movie feeling that our white protagonist has not had a fair shot,” Bravo explains, “and they will inherently root for her, even though she’s a villain. And I mean, she’s a delicious villain that you want to root for anyways. Like, I totally get it.”

Bravo cast Riley Keough as Stefani opposite Paige’s Zola, with Nicholas Braun along for the ride as Derrek and Colman Domingo as Stefani’s menacing pimp. One person you won’t see in the film is Zola herself, who had hopes of visiting the Florida set and maybe even making a cameo. “That would have been cute, right?” she says in a rare moment of displeasure. “That was actually a huge miscommunication that kind of upsets me.” She was pregnant. Messages weren’t relayed. Schedules weren’t sent. “But I’ve healed since.”

“The next one,” Bravo promises her. 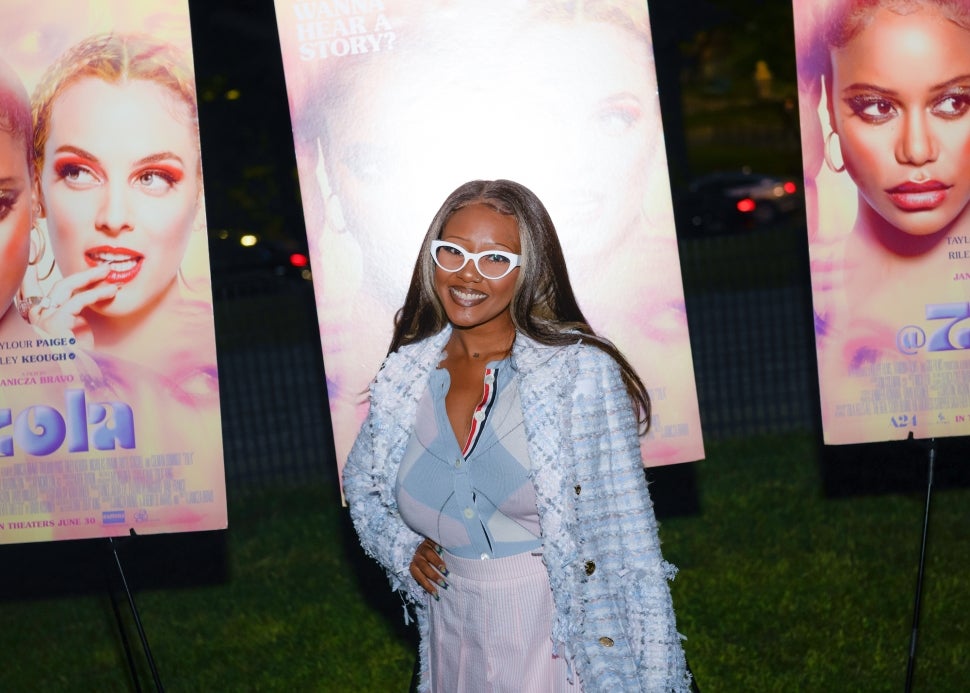 Like the thread that birthed it, Zola, the movie, is often outrageous and riotously funny, with a sobering undercurrent of profundity. Zola’s story concludes with her returning to Detroit, only to get a call from Stefani four days later. She’s in Las Vegas, using her jail call to phone Zola. “I said, ‘Florida? Murder? U have the wrong number!'” Zola writes, before delivering a final twist.

The movie ends a little earlier and a little differently than #TheStory.

“I really like ending in an ellipsis,” Bravo says. “The story I wanted to tell was a story about friendship. I wanted to tell a story about these two women who fell in love and experienced something chemical that was sexual and non-sexual all at the same time. And that first tweet tells it to you: Do you want to hear a story about how me and this bitch here fell out? And we heard it. That was the story. It was done.”

And still, “A part of me thought, you’re going to walk away from this going, ‘But I don’t want it to end.’ Right?” And if you ask Bravo, it doesn’t need to. “You’ll go seek out the original source material. You’ll read it. And you’ll get a sort of loop close on that.”

As for Zola, the person, the release of Zola is a new ending to her story. Something traumatic that happened to her became something she reclaimed, 140 characters at a time, and is now something she can’t wait to relive with the world.

“That particular experience I’ve processed so, so many times. Every time I watch the movie, it feels less like something that happened to me and more like an experience, you know what I mean?” she asks, looking into the middle distance. “I’ve healed from it. Me writing about it was me healing from it. Me sharing it was me healing from it. For me, it was one of those things where it’s like, ‘I’m going to laugh about this later.’ And so now I can laugh.”

Zola is in theaters on June 30.