A Titian exhibit to open in London is daring, says DAISY DUNN

Titian is X-rated? That’s just tosh! One of the most daring art exhibitions for years is about to open in London. But as these masterful nudes are banned on Twitter, female classicist DAISY DUNN says they are not just gratuitous images of naked women

Scenes of abduction, killing and rape. Naked women flaunting their fleshy thighs and dimpled bottoms. A young beauty chained to a rock.

A new exhibition of the Renaissance artist Titian, soon to open at London’s National Gallery, may be the most daring in years.

At a time when galleries and other institutions are becoming increasingly jumpy about offending the public with ‘sensitive’ material, Titian: Love, Desire, Death represents an admirably bold undertaking. For the six pictures at its centre – some of the greatest ever painted by the 16th-century master – feature subjects flagrantly at odds with today’s social mores.

In Danaë, a princess lies on a bed while a shower of gold falls suggestively between her legs. She is nude, her breasts and gently rounded stomach exposed and her complexion glowing milk and roses. 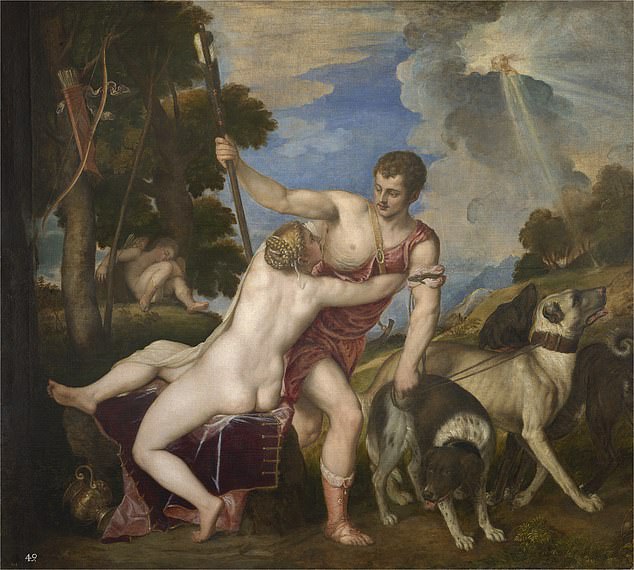 Her father has imprisoned her. The stream of gold represents Jupiter, king of the Roman gods, entering her cell through a hole in the roof to impregnate her. Indeed, the scene is so graphic that Twitter this week decided that users who post images of the painting are in breach of its nudity rules.

Another painting, The Rape Of Europa, shows a girl being abducted by Jupiter in the guise of a bull. Her clothing unravels to expose her flesh, the fabric becoming entangled between her thighs. As a pair of adorably plump cherubs frolic above, she holds up her shawl as if to call for help – but it is no good. She is carried off against her will.

And then there’s Diana And Callisto. Another victim of Jupiter’s lust, Callisto is stripped before the chaste goddess Diana and her fellow nymphs. Her beautiful belly is swollen, pregnant with the god’s child. Jupiter’s jealous wife will transform her into a bear.

Titian was at the height of his powers when he painted these pictures. The stories he depicted are thousands of years old and set in a mythological realm. They were seldom intended as straightforward parables. The artist stopped short of graphic representation. Yet had they been exhibited for the first time today, there would be cries of outrage. 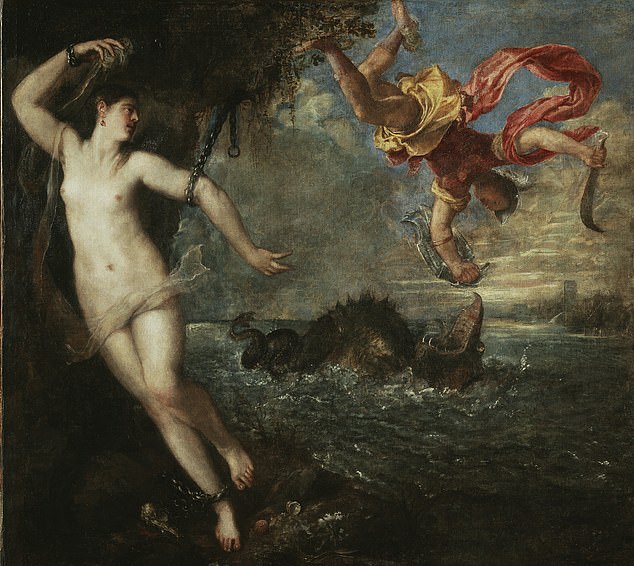 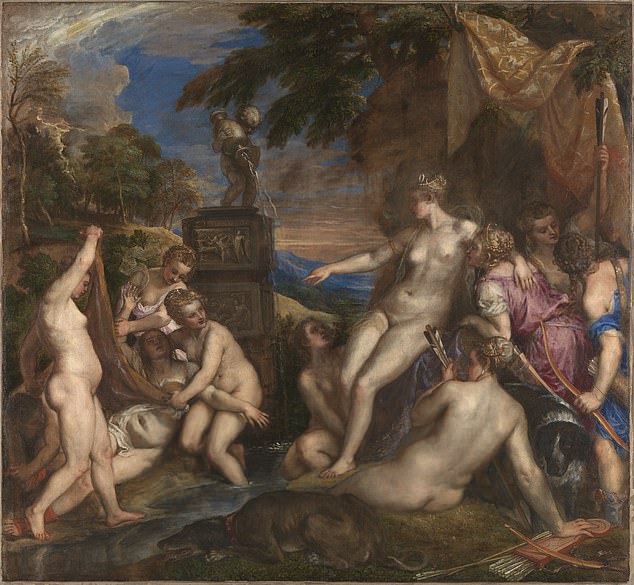 In the age of MeToo, the female nude has become ‘problematic’. Just last year, the Royal Academy mounted an exhibition in which curators sought to display an equal number of naked men and women. For some, even this did not go far enough.

Alice Procter, who runs so-called Uncomfortable Art Tours highlighting the role that colonialism is said to have played in the creation of our gallery collections, tweeted: ‘How many of these male nudes are going to be described as ‘ideal/heroic/classical’ aka white/ enabled/cisnormative?’

In an era when images of naked men and women are available at the click of a mouse, when commentators constantly warn about the ‘pornification’ of culture, it seems that even Renaissance art isn’t immune to the censors’ black pen.

Happily, the National Gallery has so far resisted calls for ‘trigger warnings’ alerting visitors to the presence of difficult themes. Other galleries have gone to town with these. At Tate Britain, for instance, a sign last year warned that William Blake’s mythology-steeped pictures from the 18th century contain ‘strong and sometimes challenging imagery’. The English artist’s scenes of fiery hell are certainly arresting. But nightmare-inducing? No.

Back at the National Gallery, a spokeswoman states: ‘Customer feedback will be monitored closely and decisions over signage reviewed, if necessary.’ Far more useful, revealing and uplifting than such labels is an understanding of what Titian’s pictures, which stopped short of graphic representation, signify. 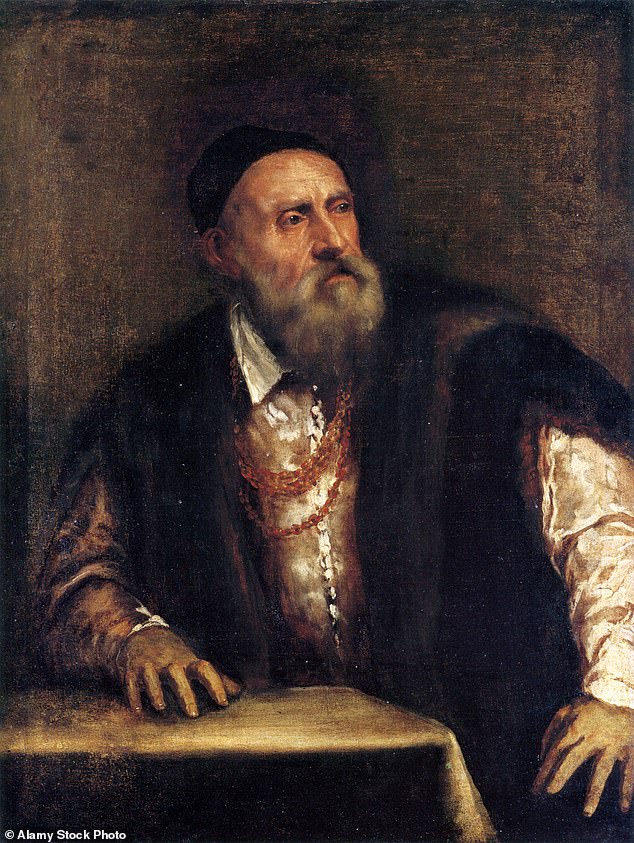 Pictured: Tiziano Vecellio, self-portrait, to be on exhibit at the London Gallery this year 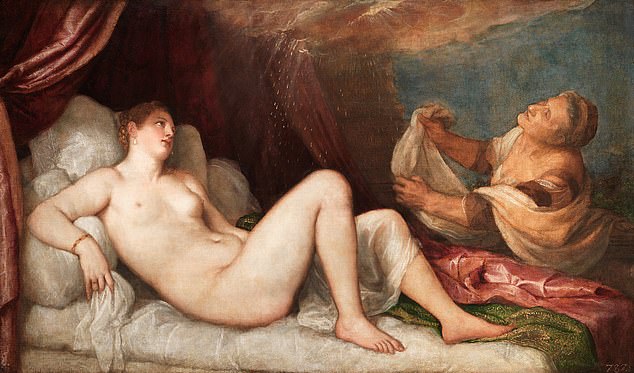 His Poesie paintings – six stunning mythological scenes inspired by the poetry of the ancient writer Ovid, and united for the first time in centuries in the National Gallery – are neither celebrations of brute force nor gratuitous snapshots of naked women.

They have a profound spiritual lesson to teach us, symbolising human powerlessness in the face of forces beyond our control. They are at heart about religion, and the fear that God and gods have inspired in us, in Christian and pagan times alike. Yet such considerations are unlikely to pacify the perpetually outraged.

Metamorphoses, the poem by Ovid on which Titian based his pictures, has already been cited by some students as offensive or, as they so often put it, ‘triggering’.

Titian: the painter who became one of the Renaissance’s greatest and most important Venetian School artists

He was one of the most accomplished and versatile artists of his generation, adept with portraits, landscapes, and mythological and religious subjects.

Titian’s painting methods, particularly in the use of colour, had a huge influence on other Renaissance painters, as well as future generations of Western-inspired artists.

His career was successful from the start, and he became sought after by patrons, initially from Venice and its possessions, then the northern Italian princes, and finally the Habsburgs and papacy. Along with Giorgione, Titian is considered a founder of the Venetian School of Italian Renaissance painting.

Some passages, it is said, could prove upsetting to read if you haven’t had prior warning of their contents. When students at Columbia University in New York made the case for applying ‘trigger warnings’ to the poem in 2015, they acquired a following in Britain.

One of the passages the students were concerned about describes a god chasing a girl who is transformed into a tree, which the god then ravages.

It is understandable that many feel uncomfortable or even anxious when confronted with images or descriptions of sexual violence – especially those who have been victims of such crimes.

But neither Ovid’s poem nor the Titian paintings it inspired deserve to be censored or frowned upon because they broach the subject. To represent something isn’t to endorse it.

It is clear from Titian’s paintings that he empathised with many of his female subjects. Just look at how he portrayed Europa’s eyes: they are full of fear, rolling back into their sockets. So who was the man whose works are provoking such furious debate?

Known as Tiziano Vecellio in Italy, Titian was born about 1490 in the small town of Pieve di Cadore. He trained in Venice, which was vulnerable, thanks to its trade links, to plague. Titian himself would die from the disease aged about 85.

But a libertine culture developed. Prostitution was ubiquitous. According to a contemporary diarist, about 12 per cent of Venice’s 100,000 residents were prostitutes in 1500.

Titian almost certainly used prostitutes as models for some of his nudes. An astute businessman, he cultivated as patrons wealthy dukes and the Holy Roman Emperor, Charles V, the most powerful man in Europe.

Charles was so taken with Titian that he appointed him a court painter and made him a ‘Knight of the Golden Spur’. While Charles had conservative artistic tastes, favouring portraits and religious scenes, his son, who became King Philip II of Spain, had more sensual interests.

Philip must have been delighted by the portrayal of the human form in these masterpieces. Yet this classical flesh going on show in London is not there to be ogled – but admired.

Snowflakes who threaten to melt before Titian’s steamy nudes should remember that even they were born without clothes.

Daisy Dunn is a classicist and the author of Of Gods and Men: 100 Stories From Ancient Greece & Rome (Head of Zeus). Titian: Love, Desire, Death is at the National Gallery in London from March 16 to June 14, 2020.