Kabul: The Afghan government is already objecting to elements of the peace deal signed by the United States and the Taliban.

At a news conference Sunday, Afghan President Ashraf Ghani contradicted several aspects of the deal, including the timeline for a controversial prisoner exchange. 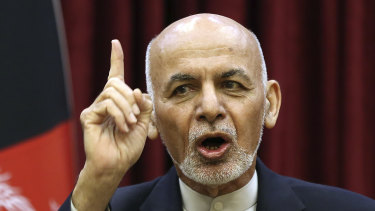 Ghani's comments, less than 24 hours after the signing of the deal, highlight the difficulties that lie ahead for Afghanistan as the conflict enters a new phase.

Specifically, the conditions surrounding the start of talks between the Taliban and the Afghan government and future levels of violence nationwide.

The US-Taliban peace deal charted a path for the full withdrawal of all US troops from Afghanistan and stated that intra-Afghan talks must begin by March 10. 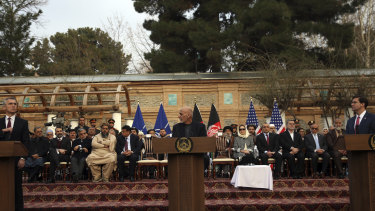 By that date, the deal stipulated, the Afghan government and Taliban must complete a prisoner exchange.

The Taliban has long demanded the release of 5000 of its fighters held by the Afghan government, but officials in Kabul see the prisoners as a key piece of leverage to be used during their talks with the militants.

"Freeing Taliban prisoners is not (under) the authority of America, but the authority of the Afghan government. There has been no commitment for the release of 5000 prisoners," Ghani told reporters gathered inside the palace in Kabul on Sunday.

Ghani said the prisoner swap could be discussed during talks with the Taliban but could not be a precondition.

The text of the US-Taliban deal released by the State Department clearly said the exchange of 5000 Taliban prisoners for 1000 people held by the Taliban would occur "by March 10, 2020, the first day of intra-Afghan negotiations."

The peace deal with the Taliban has been a critical foreign policy goal for President Donald Trump, who campaigned on ending the war. But the deal signed on Saturday came under renewed criticism from fellow Republicans back home.

The deal is "reminiscent of the worst aspects of the Obama Iran nuclear deal," said Representative Liz Cheney, in a statement on Saturday. Cheney, a member of the House Republican leadership, warned the deal "could threaten the security of the United States."

Cheney also asked for the State Department to make "verification mechanisms" and "any other side deals or annexes, public."

"The American people deserve to know precisely what deals have been cut in our name with the terrorists who harboured those who attacked us on 9/11," she added.

Outside the palace walls in Kabul, Afghans expressed apprehension and elation about the peace deal.

"I'm not optimistic about the deal," said Qasima Khuram, a 22-year-old student working in a cafe in downtown Kabul. Khuram, who said she has dreams of being a business owner after completing her master's degree, said she was most concerned about how women's rights will change if the Taliban assumes a formal role in any future Afghan government.

"We know their background, we know their history. So looking back at this, we know what they would do in the future," she said.

Just across the street a 57-year old man selling almonds said he would have danced once the peace deal was signed "if I knew how to dance," he said laughing.

"This government guides people to hell," said the man, who declined to give his name for fear of reprisals.

He said he lived through Taliban rule in Kabul and said during that time he never witnessed the levels of corruption, petty theft and crime that he has seen under the current administration.

"Hearing about the peace deal, it energised me," he said.

Ghani, however, said on Sunday that the reduction in violence would extend and eventually transform into a cease-fire.

"The reduction of violence will continue and our goal is to turn (it) in into cease-fire," he said. The top US commander in Afghanistan "has made it clear to the Taliban that this is part of the (peace) deal," Ghani continued. "If they back away from it, then (the Taliban is) openly violating the condition set for them."

Responding to a question about the status of the reduction in violence agreement, General Austin "Scott" Miller said, "The expectation is Taliban violence continues to stay down and does not go back up."

So far the reduction of violence has continued to mostly hold, according to Afghanistan's acting minister of interior Massoud Andarabi.

But Andarabi said that he has received four reports of the Taliban abducting Afghan police officers within the last two days – something he believes the Taliban may be doing to exchange them with the Afghan government.

A US official, speaking on condition of anonymity due to the sensitivity of the issue, said he believes the new kidnappings are intended to bolster Taliban bargaining power in the upcoming prisoner exchange.

A deepening political crisis in Kabul also had the potential to complicate the next steps after the signing of the peace deal. Ghani's main rival, Abdullah Abdullah, called the deal signing an "historic event," and said he hoped for the formation of "an inclusive, national and countrywide delegation to take part," in talks with the Taliban.

Abdullah has threatened to set up a parallel government after declaring the recently announced election results invalid. If these divisions persist they have the potential to undermine Ghani's ability to form a representative team to negotiate with the Taliban.

Over the past year leading up to the signing of the peace deal, Afghanistan's conflict has intensified resulting in record high civilian casualties. Since the US invasion in 2001, the conflict has cost over $US2 trillion and killed tens of thousands.