Anyone but Bernie: moderate Democrats unite behind Joe Biden

Washington: Since the Democratic Party's presidential nomination contest officially began in Iowa, Bernie Sanders has had a big advantage over his rivals.

With Massachusetts Senator Elizabeth Warren's support declining, Sanders has had the bulk of progressive Democrats unified behind him. Meanwhile, moderate voters have been fragmenting their support across several candidates.

Now those days are over. 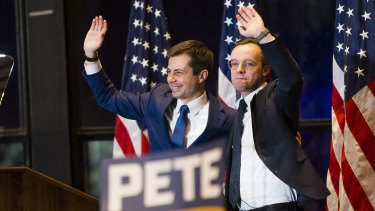 “By every conventional wisdom, but every historical measure, we were never supposed to get anywhere at all,” said Pete Buttigieg, pictured with his husband Chasten, bows out.Credit:South Bend Tribune/AP

So did former presidential contender and Texas congressman Beto O'Rourke.

The rush towards Biden is not driven by enthusiasm for the 77-year-old, who remains a flawed candidate in many ways.

It's driven by fear of Sanders, a candidate many Democrats believe is a uniquely risky choice for the November election. They fear he will cost them not just the presidency but drive down the Democratic vote in crucial Senate, House and state races across the country. 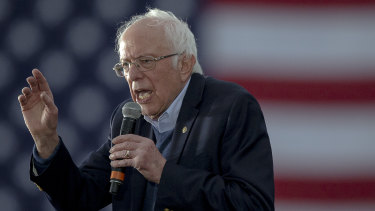 This will come as a shock to the mostly black and working class voters of South Carolina, who handed Biden a thumping victory there at the weekend.

Voters like Elizabeth Bellamy, a 74-year-old black woman The Sydney Morning Herald and The Age met at a church in Charleston last week, aren't part of a powerful political elite.

But they are pragmatic, desperate to beat Donald Trump and unimpressed by calls for a political revolution. They know from their own lived experience that political progress is hard-won and can be easily taken away.

"He says he wants to make college free: is that for real?" Bellamy said of Sanders. 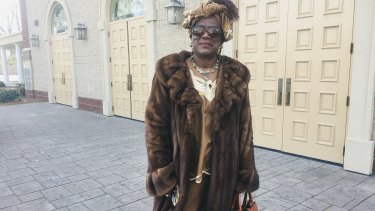 As for the current and former members of Congress who are backing Biden, they can certainly be described as part of the political "establishment".

But while raging against the machine is smart politics for Sanders, there is nothing nefarious about political elites endorsing a preferred candidate.

Sanders, for example, has been happy to tout his endorsements from congresswoman Alexandria Ocasio-Cortez and New York City Mayor Bill de Blasio.

The Democrats who are backing Biden may be making a miscalculation: nominating Sanders would be a risky move, but so would not nominating him.

Sanders has a fired-up base of younger supporters who won't necessarily turn out to vote unless he is on the ticket. And Biden remains uniquely prone to gaffes – like falsely claiming he was arrested in South Africa.

A two-person contest between Biden and Sanders would make it easier for Democratic voters to assess the pros and cons of nominating either man.

Sanders doesn't want the nomination process rigged against him, and that's fair. But moderate Democrats aren't going to hand it to him on a platter either.