APRIL Fools Day is just a bit of harmless fun, right? Tell that to the screaming masses fearing the world is about to end or the wife quite literally frightened to death.

Some pranks end up having horrific unintended consequences and there have been calls to cancel the day this year after the coronavirus lockdown sparked a wave of poor taste jokes. 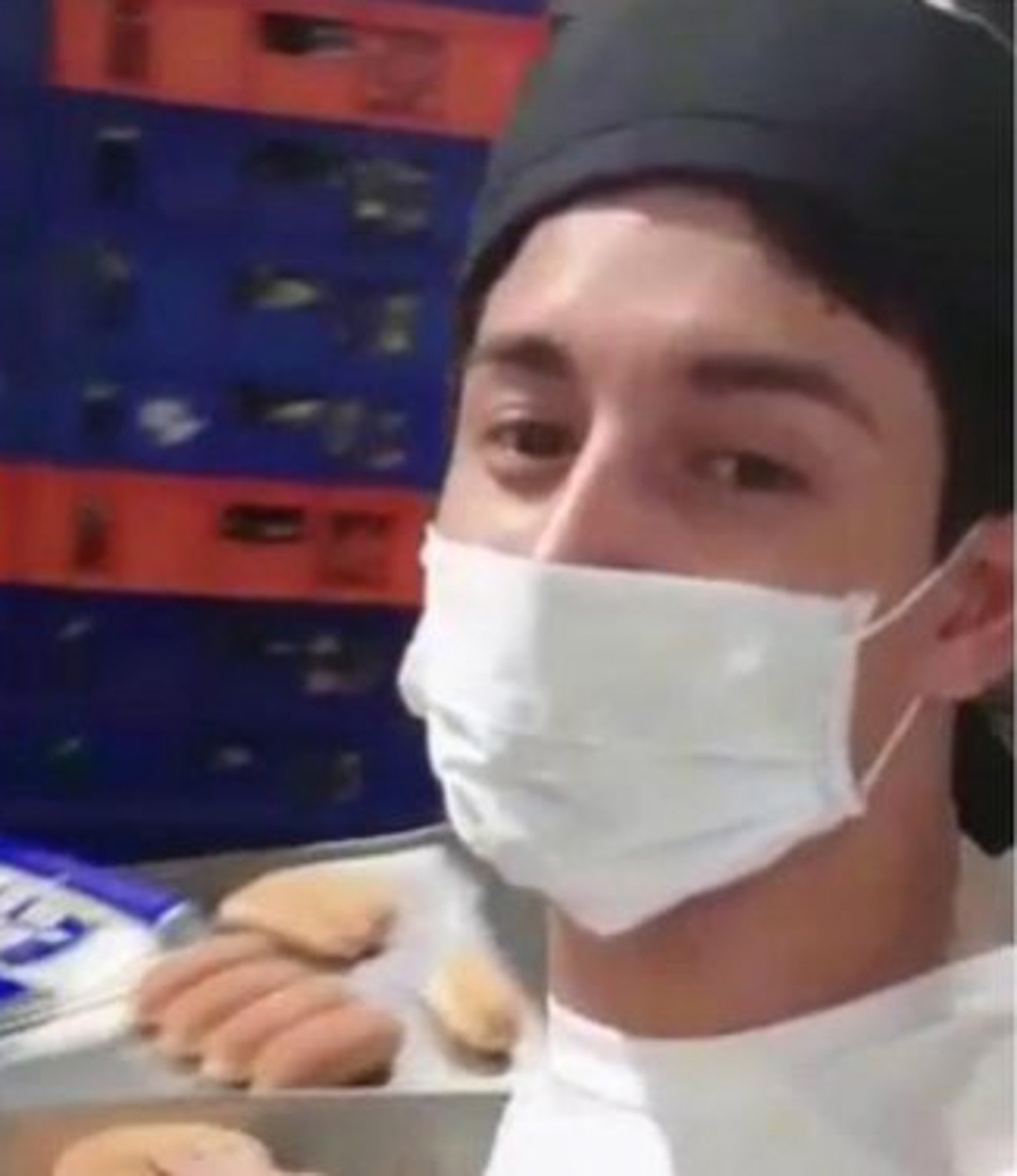 An Ecuadorian baker was accused of having committed a "terrorist act" after filming himself scratching his nose and then rubbing loaves of bread for sale.

And a Canadian Instagrammer got himself chucked off a plane after joking mid-flight that he was infected with the killer bug.

But over the years there have been countless pranks which have ended up with truly disastrous consequences.

From an inflatable UFO scrambled by Richard Branson to a fake volcano eruption, here are some of the worst. 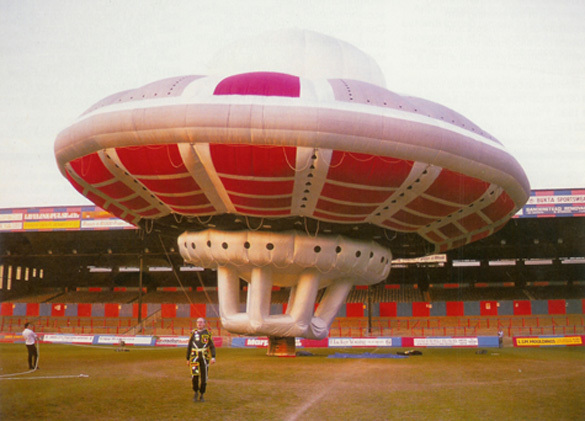 Richard Branson is now at the forefront of British space tourism — but his extra-terrestrial interests haven't always been so serious.

In 1989, the Virgin boss thought it'd be hilarious to fly a UFO-shaped hot air balloon over London.

"By the time we’d reached the motorway it was beginning to get light," he said.

"We could see every single vehicle grinding to a halt and hundreds of people looking up at the UFO flying over them.

"It was great fun watching their reactions."

But not everyone on the ground saw the funny side, responding to the UFO with panic and terror.

Branson added: "What we didn’t know was three police forces had been mobilised, the army had been alerted and radio and TV stations had all gone on the air about a UFO flying low over London!" 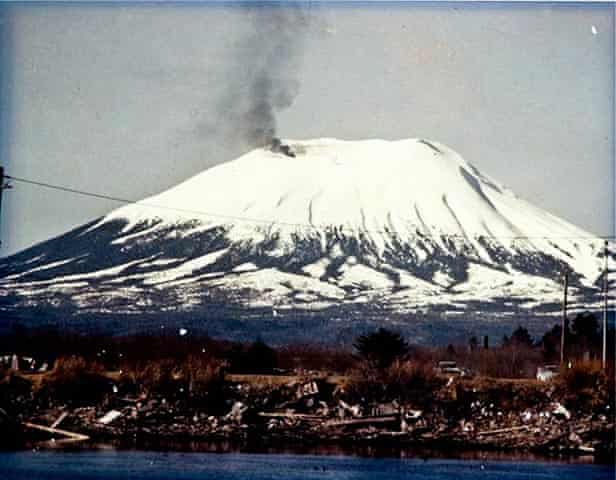 Residents in the Alaskan city of Sitka woke up to a terrifying sight on the morning of April 1, 1974.

Mount Edgecumbe, a volcano which had been dormant for 400 years, had an enormous cloud of thick black smoke rising from its crater, threatening to destroy the city in a hellish eruption.

A Coast Guard helicopter was urgently scrambled to investigate the fire as worried locals ran for their lives.

But the chopper pilot found a pile of tyres burning on Edgecumbe's summit next to a giant message in the snow reading: "APRIL FOOL".

It turned out to be one of the most elaborate pranks of all time, devised by local Oliver "Porky" Bickar.

He'd enlisted the help of a private helicopter pilot who agreed to fly the tyres to the top of the mountain and set them on fire for the ruse.

Bickar later revealed: "On April Fool's Day, I hired a chopper and flew 70 old, kerosene-soaked tires on top of the dormant volcano, Mt. Edgecumbe, that looms over Sitka.

"I set the tires on fire, and the billowing, black smoke created one hell of a commotion in Sitka.

"I dare you to top that April Fool's joke." 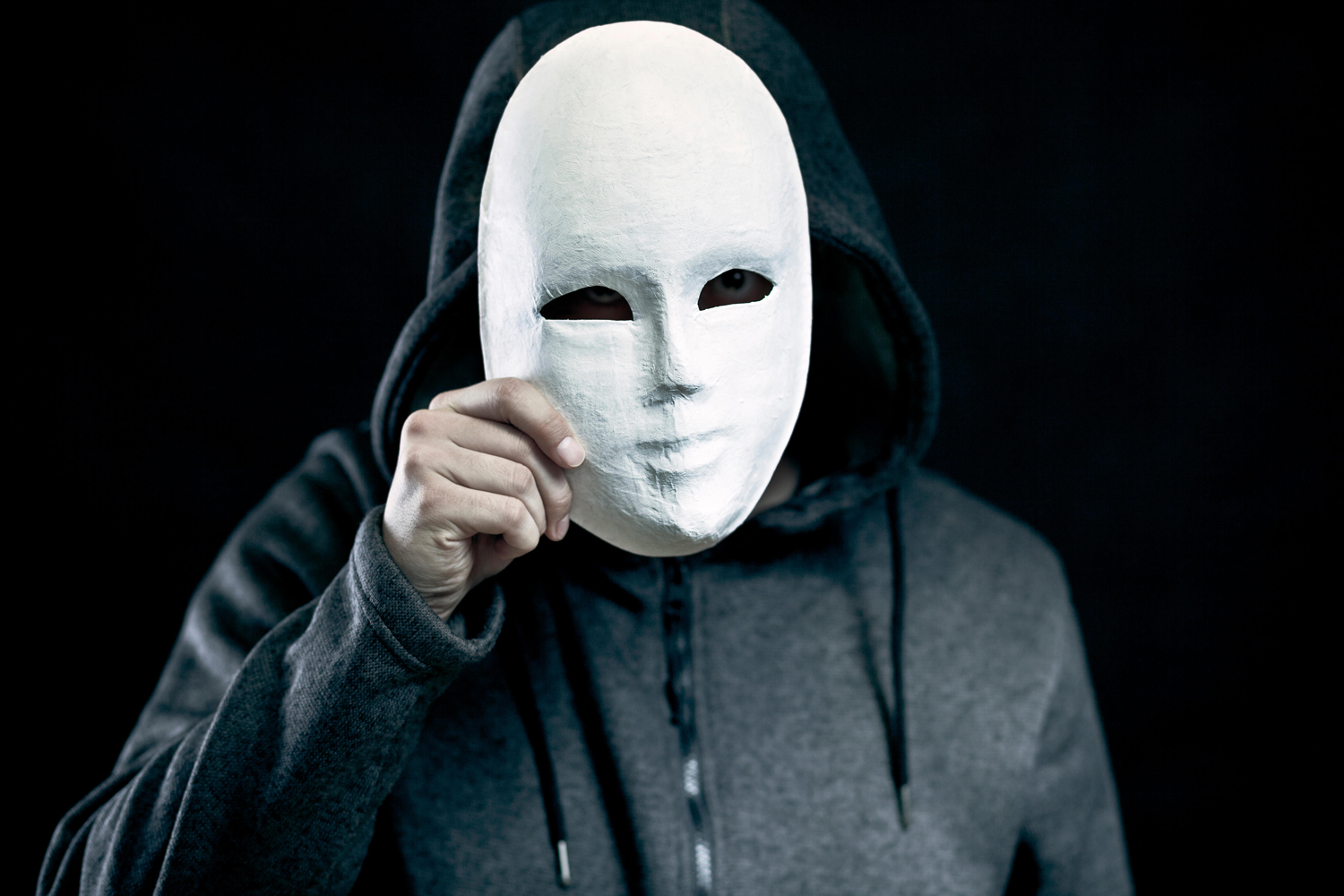 A husband was said to live his life in unending grief after he scared his newlywed wife to death in Tennessee.

In 1896, John Ahrens decided to dress up as a tramp and donned a white mask to scare his newlywed.

He knocked on the front door of their home to ask Mrs Ahrens to cook dinner and she fainted from fright.

She was dead within an hour.

Death do us part 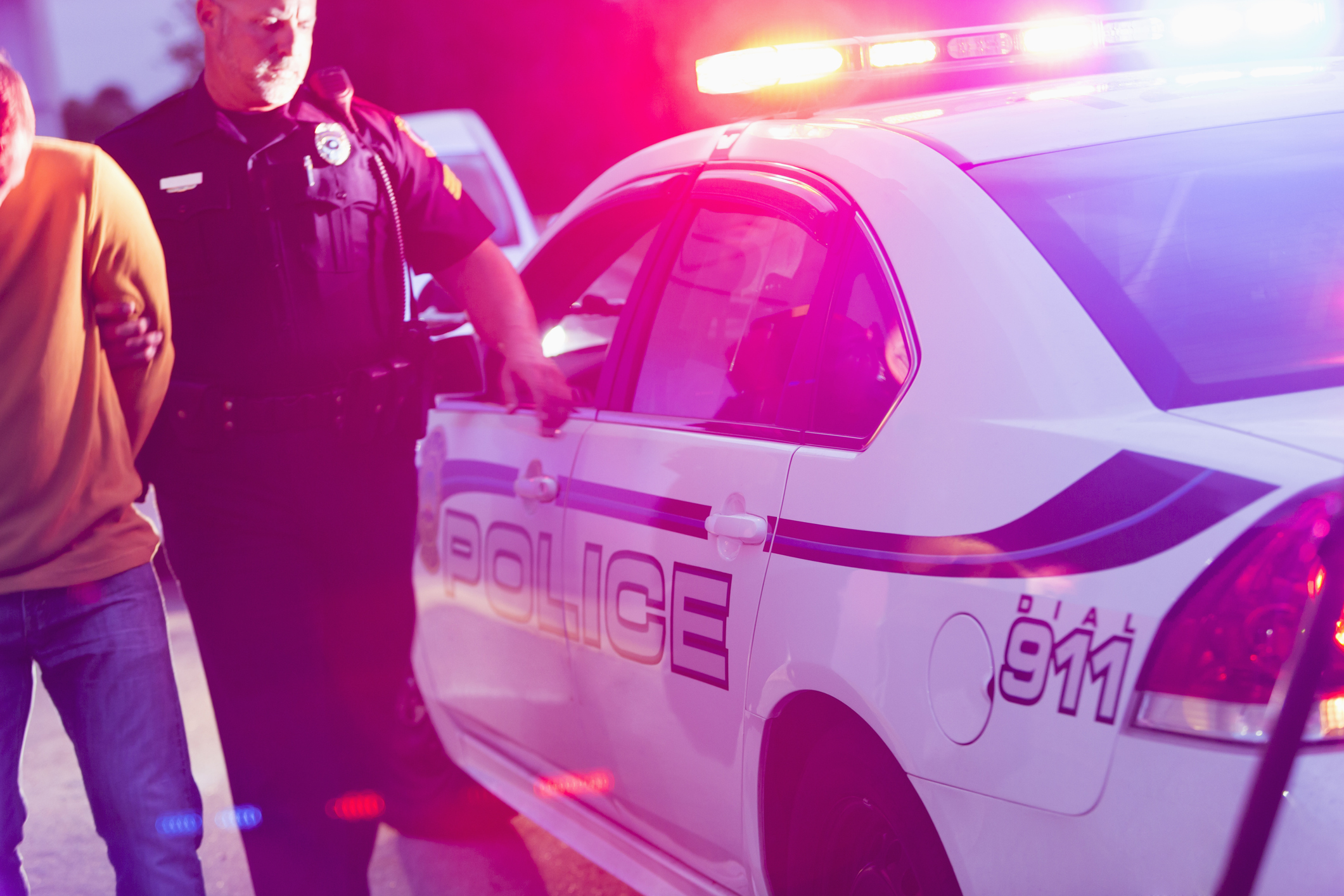 Randy Wood thought it would be hilarious to have his ex-wife believe he'd killed himself  by staging a suicide scene on his own lawn in 2004.

The alleged "prank" led to his ex making breathless 911 calls which led to police cars and ambulances racing to the house in New York.

But when the emergency services got there they found Wood very much alive.

The relief didn't last long though — he was arrested for falsely reporting an incident. 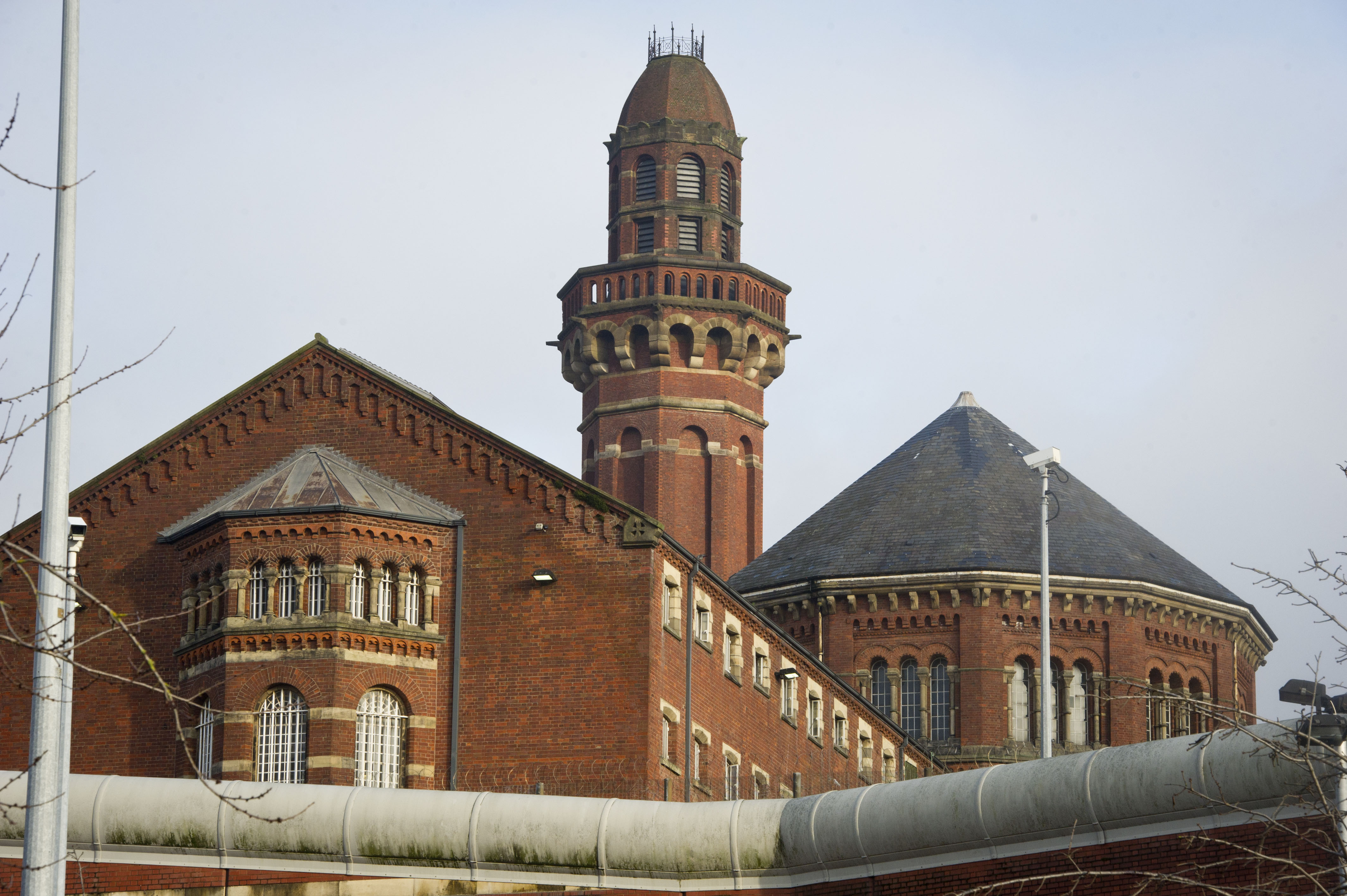 But cops themselves have been responsible for some wildly misjudged pranks.

Greater Manchester Police probably had the worst of them when, in 2015, they ran a "joke" public vote for which prisoner they'd most like to see released.

They added that the winning lag would also be given a free holiday.

But the jape enraged many people, including the families of victims of violent criminals.

Sylvia Lancaster, whose daughter Sophie was battered to death in 2007, told the Mirror: "It's a bit silly really, and shows a bit of a warped sense of humour." 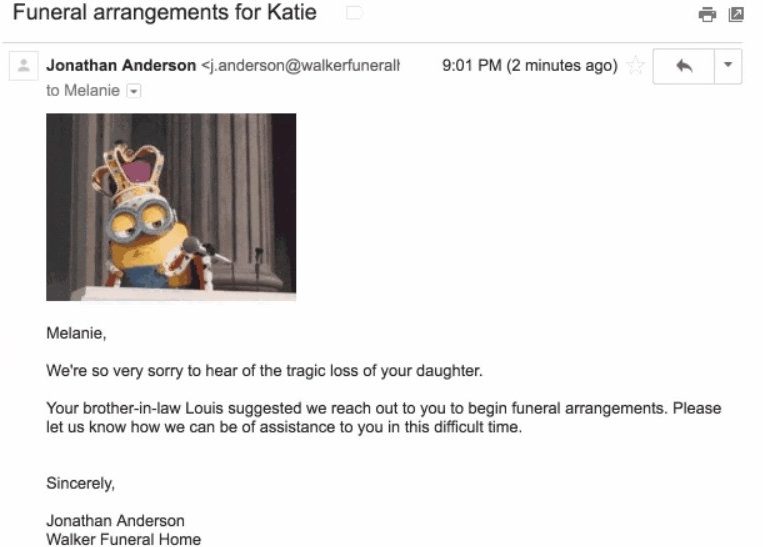 In 2016, Google ended up admitting: "Well, it looks like we pranked ourselves this year."

The internet giant had released an April Fool's feature called the "Mic Drop" which let users add an animated GIF of a minion from the film Despicable Me dropping a microphone to the end of emails.

Once it was used, the email chain would be disabled as if the user had dropped the mic and finished the discussion.

On the face of it, the feature was just a bit of lighthearted fun — but because the Mic Drop feature was next to the send button, many people added them into emails by accident.

That led to some wildly inappropriate messages being sent, including to future employers from recent interviewees or to bereaved families from undertakers. 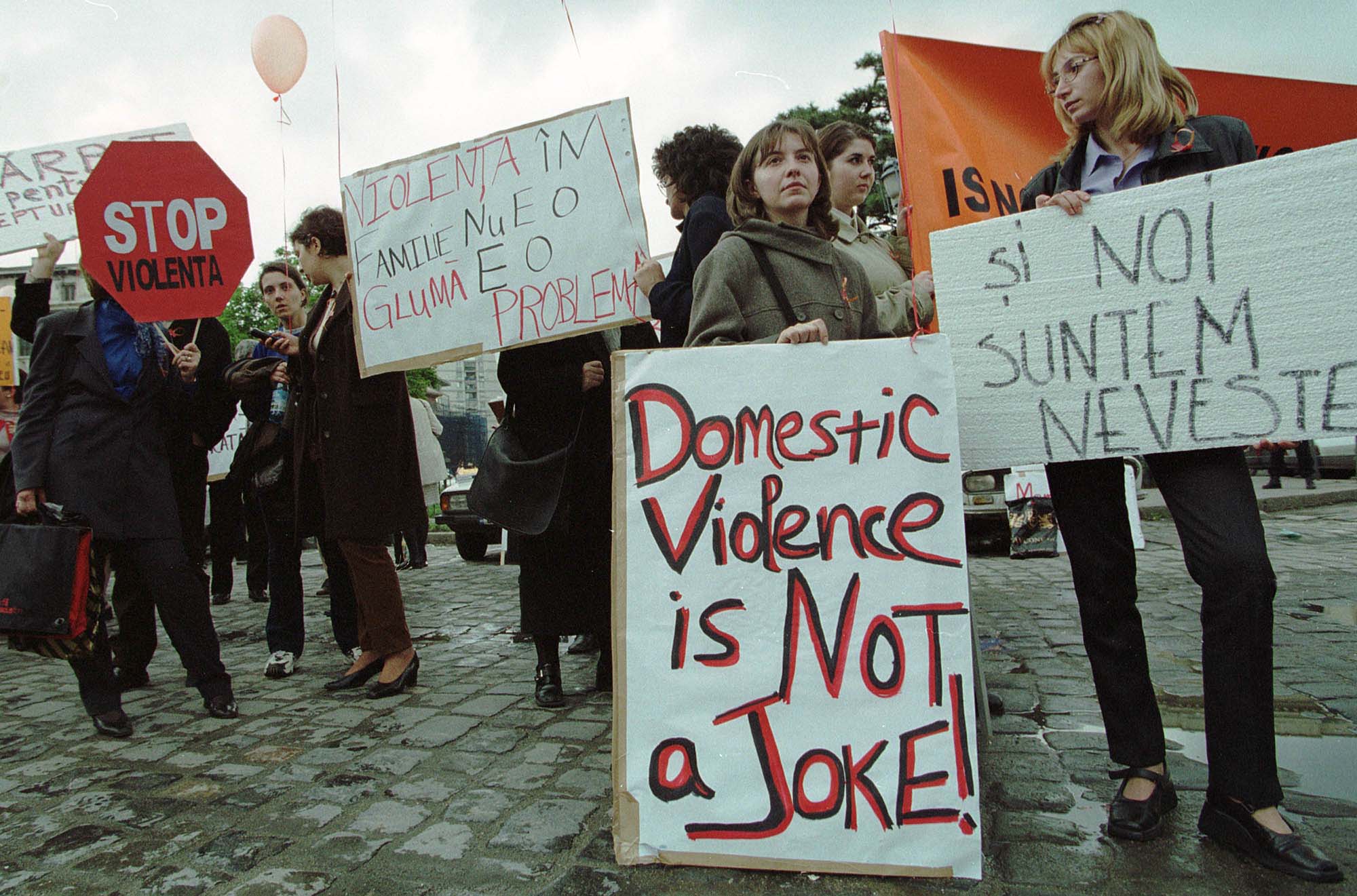 The Romanian version of Playboy magazine published a horrific article in 2000 headlined: "How to beat your wife without leaving traces".

They claimed the article was a joke — but it was taken extremely seriously by many and the uproar sparked nationwide protests.

Playboy later apologised and was said to have promised to give money to anti-domestic violence programmes as well as publishing articles which educated men about domestic violence.

Boxer Billy Joe Saunders is currently facing a year-long ban from the sport after releasing a video on social media which appeared to promote violence against women.

He later apologised for the vile clip, claiming his "sense of humour is not everyone's cup of tea", and donated £25,000 to a charity dealing with domestic violence. 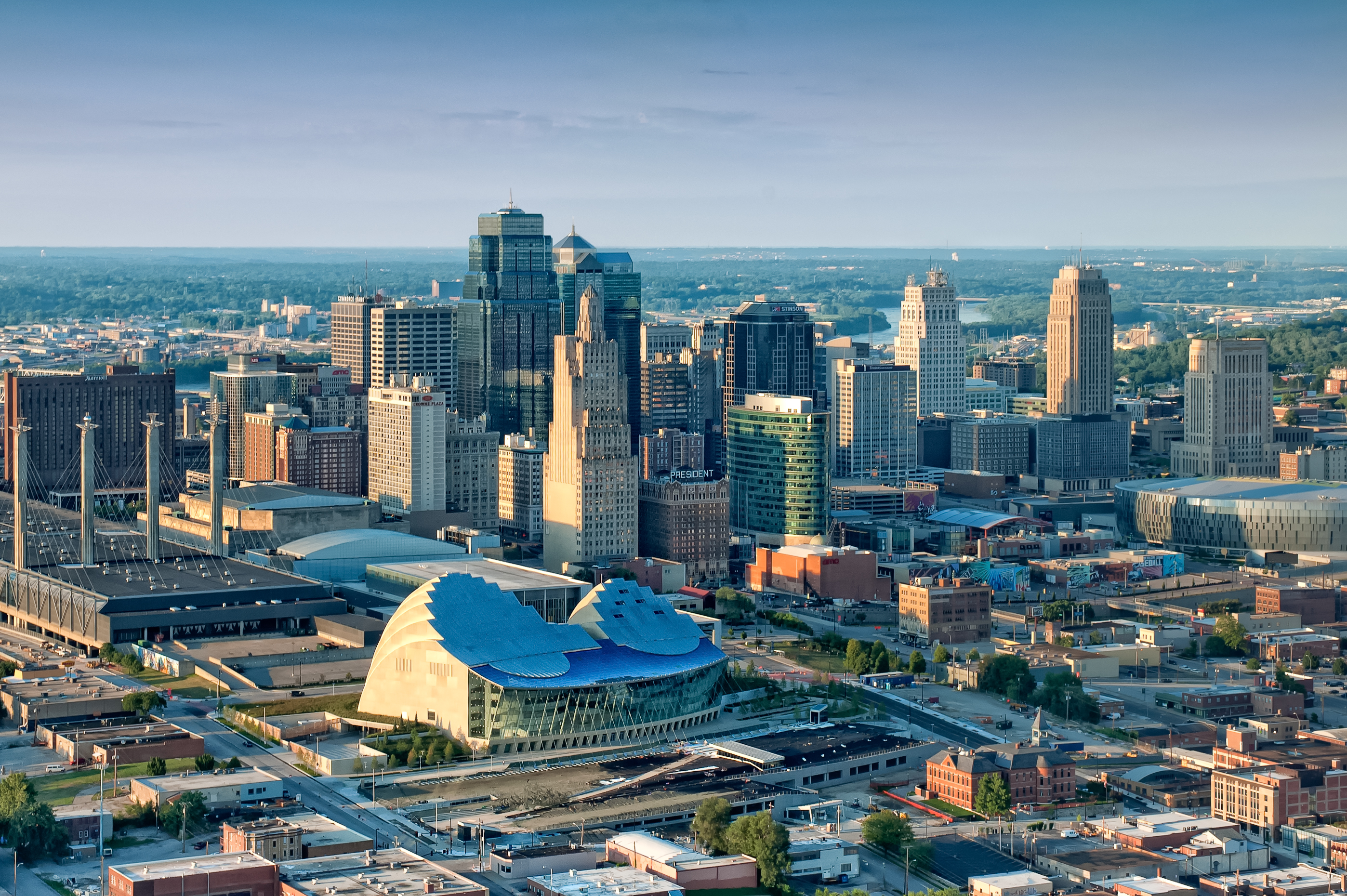 Radio hosts ended up being likened to terrorists in 2002 when their prank triggered mass panic.

In Kansas City, local disc jockeys warned listeners that high levels of dihydrogen monoxide had been detected in the local water supply.

They said the substance could cause skin to wrinkle and leave people needing to frequently urinate.

But they failed to mention that dihydrogen monoxide is just the chemical name for water.

Over 100 panicked locals called the cops, who were so unimpressed with the radio hosts that they likened it to a terrorist incident. 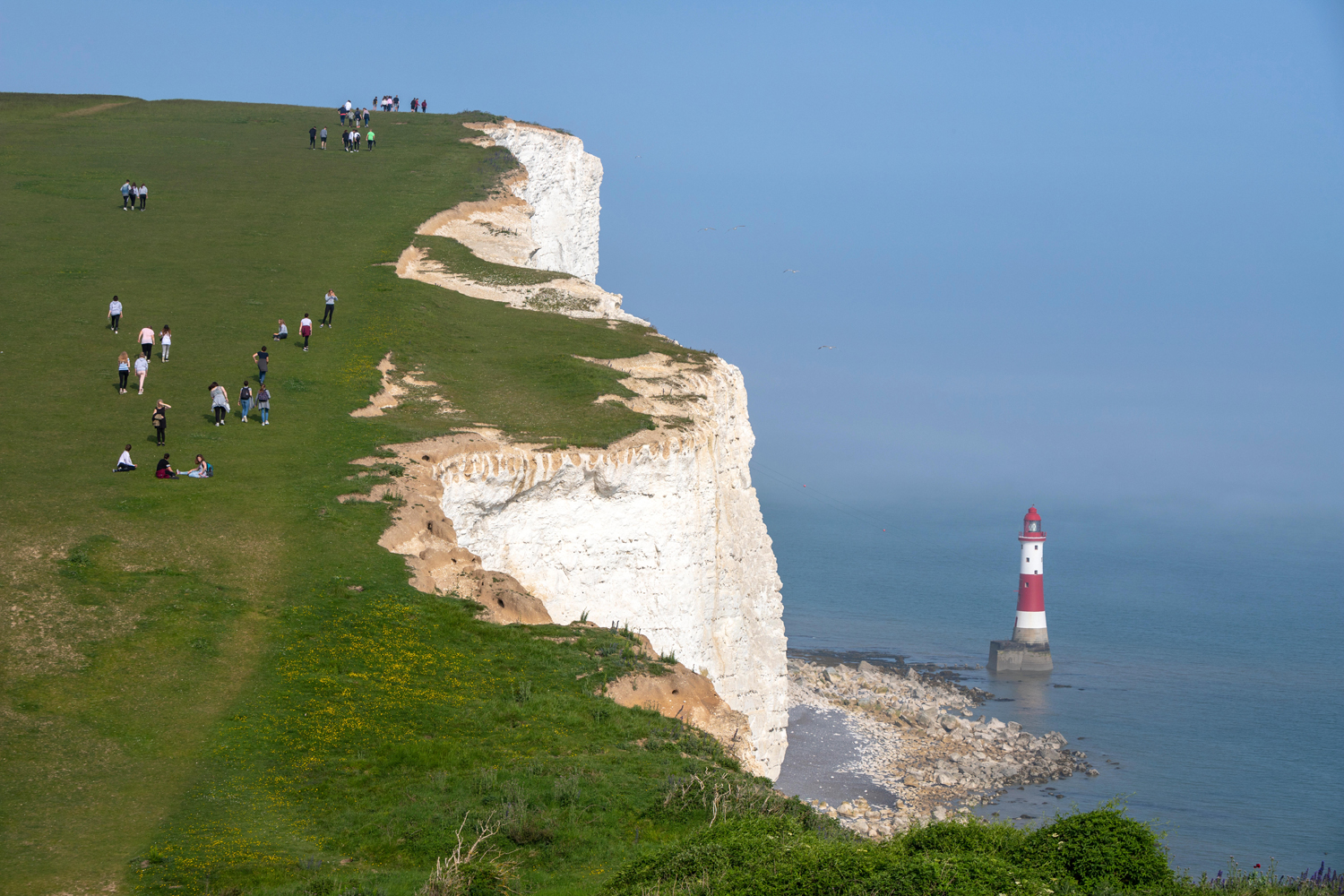 British radio hosts have also had their own prank disasters too.

In 2001, a Brighton DJ broadcast that a replica of the Titanic could be seen from Beachy Head in Sussex.

Hundreds of listeners from miles around flocked to the cliffs to catch a glimpse of the vessel.

But of course, the fabled ship was nowhere to be seen — though the incident did have very real consequences.

Coastguards said a crack appeared in the cliffs due to the weight of all the people who had visited because of the prank.

And a few days later, a large section of the rocks completely collapsed.

Not the end of the world 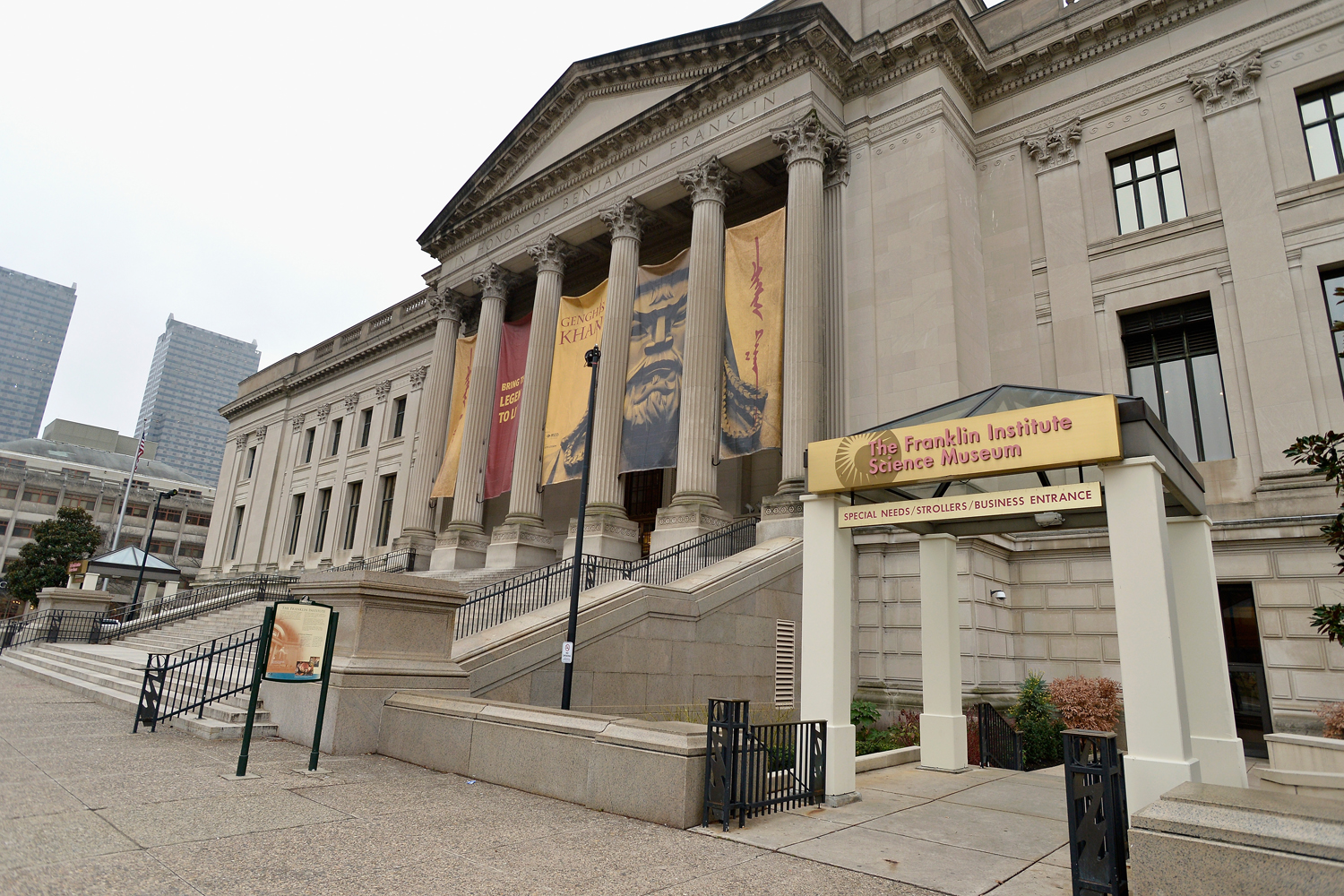 And it's not just radio hosts who've needlessly started a mass panic.

In 1940, the Franklin Institute Science Museum in Philadelphia allowed its spokesperson, William Castellini, to issue a terrifying announcement.

"Your worst fears that the world will end are confirmed by astronomers of Franklin Institute, Philadelphia," it read.

"Scientists predict that the world will end at 3 p.m. Eastern Standard Time tomorrow. This is no April Fools' joke."

The press release turned out to just be a novel way of promoting the museum's forthcoming exhibition about cosmic apocalypses.

But emergency services in Philadelphia were inundated with worried calls and Castellini was sacked. 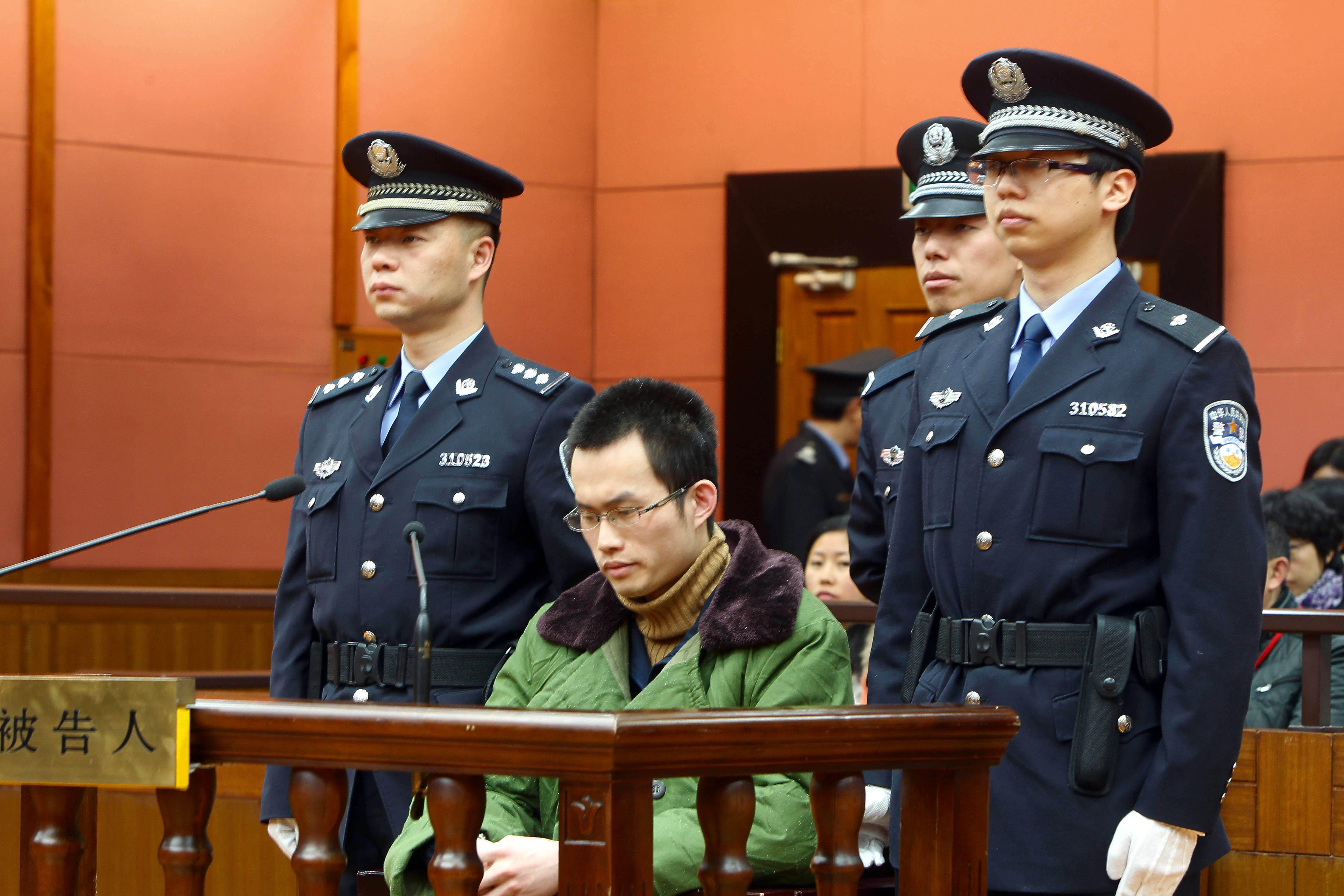 Some jokes aren't just in appalling taste — they have deadly serious consequences.

Lin Senhao became known as the April Fools Day Killer after fatally poisoning his roommate in what he claimed was a prank gone wrong.

His roommate, Huang Yang, died of multiple organ failure aged 27 after he drank water that Lin had spiked on April Fool's Day in 2013.

Lin swiped the toxic chemical N-Nitrosodimethylamine (NDMA) from a hospital lab and, he claims, he'd only waited to cause some mild discomfort with the poisoned water.

But he poured 10 times a lethal dose into the water dispenser that Huang drank from.

Lin was ultimately found guilty of murder and was executed in December 2015. 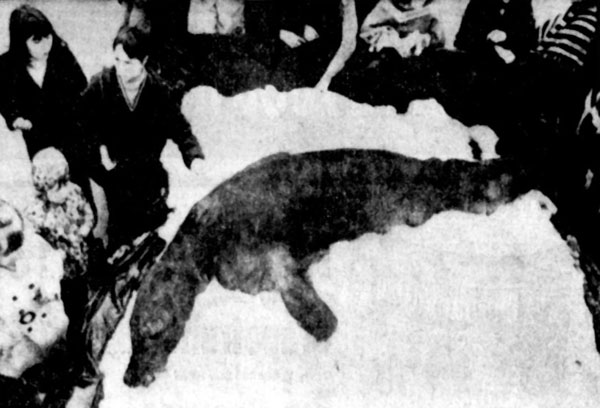 A team of scientists from Yorkshire's Flamingo Park Zoo thought they'd made the ultimate discovery in 1972 when they found a mysterious animal's lifeless body floating in the waters of Loch Ness.

The unidentified creature appeared to be the body of the fabled Loch Ness Monster, immediately starting a media storm of reports that the beast had finally been found.

One local resident reportedly said: "I touched it and put my hand in its mouth. It's real, all right.

"I thought it looked half-bear and half-seal… green in color… with a horrific head like a bear with flat ears. I was shocked."

Scottish cops got involved when they stopped the English researchers trying to take the national cryptid back across the border for examination.

I thought it looked half-bear and half-seal

But when the creature's body was inspected by the curator of the Edinburgh Zoo, he quickly identified it as the body of an elephant bull seal.

But that triggered a new mystery — how had a creature native to the South Atlantic Ocean ended up thousands of miles from home in a Scottish loch?

It turned out that John Shields, the Flamingo Park Zoo's education officer, had dumped the seal's body in the loch to prank his colleagues.

He'd even shaved its whiskers off and stuffed its face with rocks and been behind the tip-off call which led the scientists to its body.

Shields ultimately admitted the joke got out of hand when police were involved and news of the fake discovery spread around the world.