At the risk of stating the obvious, Australia’s current approach to COVID is a bit of a mess. Mainly that’s because it embodies one very simple contradiction: just as numbers are set to explode into the biggest wave we’ve ever faced, compounded by a wicked flu season, governments are steadfastly refusing to introduce restrictions, and are instead ending some important COVID measures.

That doesn’t mean governments are doing nothing. Here, I must acknowledge the federal government’s approval of a fourth vaccination shot for most, and its listing of hitherto ignored antiviral drugs on the Pharmaceutical Benefits Scheme. Some states have also significantly reduced the official “reinfection period” during which recently infected people can live more or less assuming they are immune from COVID.

But no state government seems to have the appetite for something so simple as expanded mask mandates, even though this puts them at odds with health advice. And the federal government is taking away low-income earners’ free access to RATs and scrapping disaster payments for those without sick leave who are forced to isolate at home. It’s also reducing access to telehealth.

This leaves us with the bizarre spectacle of the prime minister advising concession-card holders to stock up on RATs while they can, instead of ensuring they can continue to get them. Of the government expanding access to antivirals while making changes to telehealth the AMA says will make it harder for people to find a doctor to prescribe them. Of the health minister encouraging people to work from home, while putting workers in insecure employment in the position of having to go to work when they’re sick.

This last point is worth pondering. We now have a situation where the law requires COVID-positive people to stay home for seven days, but refuses to provide them with compensation if they have no leave entitlements. It’s a legally mandated week of zero income. In that situation, would you get tested? And is that what we want when, in the health minister’s admission, millions of Australians are about to get COVID in the next few weeks with a flow-on effect to hospitals?

In defence, the federal government offers a strange suite of arguments. First, that it inherited these policies from its predecessor, as though this somehow paralyses the new government from adapting to an emerging crisis. 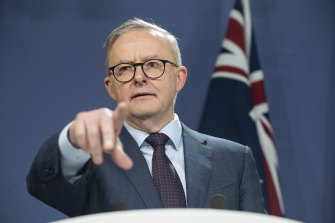 Second, that the demands of budget repair make it too expensive to continue with disaster payments and free RATs, as though this wasn’t an acute situation whose temporary extension would constitute a negligent portion of a $1 trillion debt, and as though there isn’t enormous economic cost to this impending wave getting out of hand.

And third, that concession-card holders don’t need free RATs now because RATs are much cheaper than they were in January, as though this doesn’t also suggest the cost of providing them should be more affordable.

This matters because the current strategy of both levels of government seems to be to ask us nicely to do the responsible thing. In the federal health minister’s terms, instead of “very broad-based mandates or government orders” which the public might regard as “government [being] heavy-handed”, we should instead rely on “the commonsense lessons we’ve learned over the last couple of years”.

In truth, I’m sympathetic to that approach. But there are two problems. If you’re going to ask people to do commonsense things like test and isolate, you need to make it easier for people to do those things, not harder.

And secondly, our pandemic response has, until now, been based overwhelmingly on asking us to “follow the rules”. When given the choice between encouragement and force, our governments have largely reached for force.

Extended lockdowns. Compulsory masks. Vaccine mandates, not just in high-risk industries like aged care, but across much of the workforce. It’s quite a shift to say “we aren’t doing rules any more, but you know what to do”.

One of the reasons the rules-based approach worked so well for two years is that Australians, in spite of our larrikin self-image, are fantastic rule-followers. We’re a country of compulsory seatbelts, compulsory bicycle helmets, compulsory voting. In all such things we are early adopters, or just outliers. Our sensibilities mean we quite like government regulation in exactly the way Americans don’t.

But our governments know that even rule-followers have their limits, and have clearly concluded we have reached ours. The federal government made this explicit when the health minister said that while we “tolerated very well” so many onerous rules over “the first two years of the pandemic”, we’re also “starting to reach the end of [our] tether” with them.

If that’s true – and I suspect it is – we’re in a curious position: governments presiding over a country that responds best to rules find themselves unable to pull that lever. In that respect, the current policy mess becomes the price we pay for the fact that we endured such long, hard restrictions during our COVID-zero era.

Of course, there’s a reasonably persuasive argument that if we were going to draw on every inch of our stamina and goodwill, doing it in a pre-vaccination era was a wise enough thing to do. But it does mean that with that capital now depleted, we are left relying on our weaker resources: managing a public health crisis through personal responsibility.

We’re doing this at a time when people aren’t personally scared of the virus in the way they used to be. Most of us have either had it, or know lots of people who have. And for most of us, the experience was unpleasant, but broadly bearable. The disaster of COVID only becomes visible to most when you zoom out to the level of the total population and consider what it means for the health system. And very few people experience life through that lens until it’s too late.

All of which only multiplies the difficulty of shifting suddenly to a culture of encouragement and appeals to common sense. In doing that, our governments will need to deploy every incentive, every tool of persuasion. It means telling a compelling story.

That only makes the federal government’s policy stance doubly difficult to fathom because the current story seems to be that this is all very serious, but not quite serious enough to spend what’s necessary.